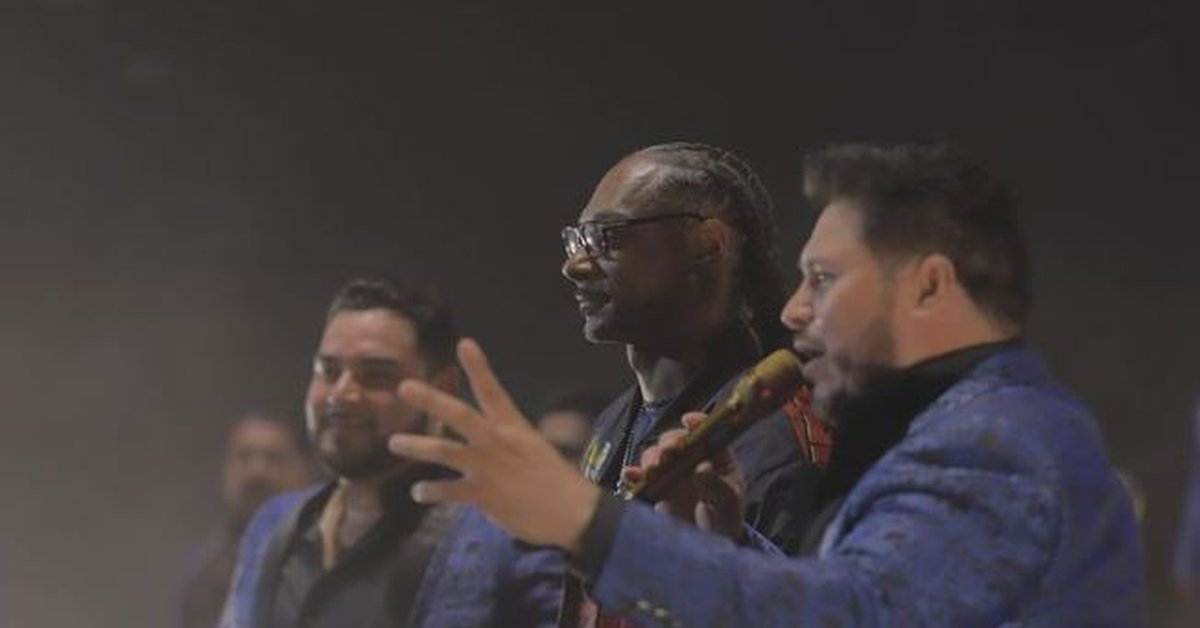 After the overwhelming success of the song “Qué maldición”, this weekend la Banda Ms welcomed American rapper Snoop Dogg during a concert in Ontario, California to sing the song for the first time on stage.

The live performance of the iconic song surprised fans of both artists and Toyota Center attendees. Among them, two of the hosts of the most important television stations in Mexico: El ‘Capi’ Pérez and Paul Stanley.

Through his Instagram stories, the driver of Come the joy shared some of the most important moments of the night. In a series of videos, Capi recorded Snoop, the opening act for the concert, playing one of his most recognized songs.

“My uncle Snoop Dog on the DJ Set before the Banda Ms,” he explained on the platform. “Putting his songs … and suddenly … this goes to hell,” he wrote at the moment when the rapper of “Young, Wild and Free” gave way to the songs of the group led by Sergio Lizárraga.

“This is what I came to,” said Cap, who also shared with his followers the moment when the artists performed “What a curse” for the enjoyment of the audience.

It was during these moments that the conductor of the Ajusco television station met the conductor of Today, Paul Stanley. As seen in the video available on Capi Pérez’s Instagram account, both presenters pretended to have a fight with obscene signs when they met.

“I almost got caught with the Paul Stanley.”Cap joked. For his part, Paul also shared, through the stories on his official Instagram account, the videos that he enjoyed the night the most.

About his meeting with the driver of the morning competition, he simply joked: “Yesterday his mother left Capi Pérez.” In addition, he joked about having smoked marijuana with the American rapper, famous for his use of the plant: “Ask Snoop who he smoked weed with”Wrote Paul.

For its part, the Banda Ms group shared with its followers some photographs of this second night of concert in the United States. Same that, according to the group, it was a “sold out”.

In social networks, the fans of the group expressed their emotion for the concert: “I loved it, thank you for such an incredible concert”, “An unforgettable night”, “I love you”, “Super night, it was very good. I love you, Banda Ms ”and“ What a great concert ”were some of the comments made by fans on the group’s Instagram profile.

“This will be engraved in Banda Ms’s career and in our hearts. Making history”, wrote Elías Nordahl, trumpeter of the group, next to a video of Snoop behind the scenes before going on stage.

At the moment, the topic “What a curse ”exceeds 72 million views on YouTube. However, this is not the only time that Snoop has shown his affection for Mexico and its music, as he recently announced that He will collaborate with a great exponent of the Mexican regional: Lupillo Rivera.

However, the curious thing about the collaboration is that they both knew each other long before they were famous: “The truth is, Snoop Dogg and I share classes, we were in the same high school, we had biology class together, I think we both had problems there because we weren’t paying attention, but we were both having fun, “Lupillo recalled at a press conference.

For his part, the rapper has also said on multiple occasions who is a fan of Lupillo’s sister: The “Diva of the band”, Jenny Rivera.

The truth behind the supposed tribute of Snoop Dogg in the mural of Jenni Rivera
“Major Leagues”: Lupillo Rivera and Snoop Dogg were classmates and now they released a song together
Who was Chalino Sánchez and what is his relationship with Snoop Dogg