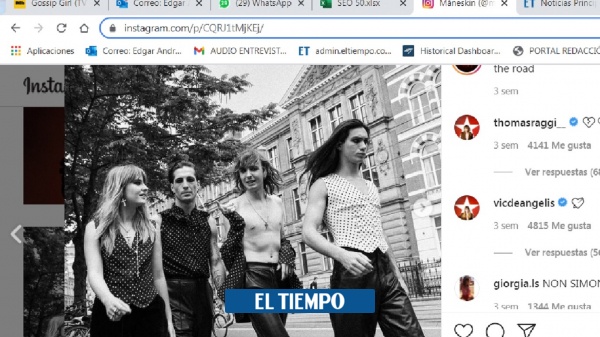 Maneskin have only been on the music scene for a few years, but they are already superstars in Europe.

Maneskin have only been on the music scene for a few years, but they are already superstars in Europe.

They have over 3 million followers, play rock, and have won at classical festivals.

Damiano David, Victoria De Angelis, Thomas Raggi and Ethan Torchio founded the group in 2015 and have worked between pop, rock and glam. They reinforced their fame on the talent show Factor X in 2015 and three years later they released the album. ‘The dance of life’, which had a great reception on the radio of his country, but the great leap was missing.

And that happened this year when we won the famous Eurovision contest, with the theme Shut up and Good, which opened the panorama to them on the continent and in the world. Before they had already won the well-known San Remo festival with the same song.

After an impressive bath of attention Maneskin He has not stood still and has been working hard on his social networks, mainly Tik Tok, in which they have become one of the most popular groups.

You may be interested in: ‘Wannabe’: the Spice Girls’ pop anthem turns 25

Damiano David, a member of the Maneskin group.

It was their fans who implored them to enter that social video network, to the point that the hashtag #Maneskin has more than 1,500 million views and the song Beggin, It was used in more than 400 thousand videos developed by a truly devoted fan base and dedicated to the group.

They already have more than 3 million followers on their Tik Tok (therealmaneskin) account, but with only three videos uploaded to they have more than 7 million ‘likes’.

The most interesting thing about this group is that They play rock, they come from winning contests of old time and now they conquer the place of interaction of the youngest audiences.