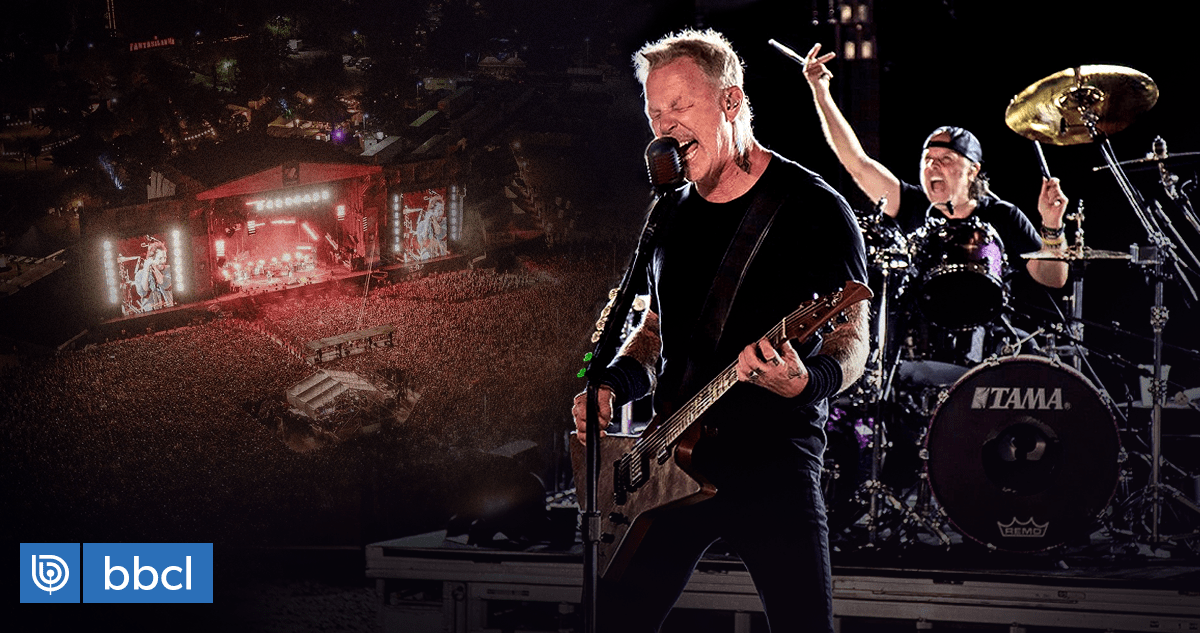 So far in 2021, Sernac has received 740 complaints related to concerts, most of which are claims related to the tickets for this type of event. Inside the list, Punto Ticket is the ticketera that concentrates the most cases, with 403, followed by Ticketek with 103.

It is a phenomenon that is obviously linked to the pandemic, which has forced the rescheduling and suspension of hundreds of shows that were organized prior to the catastrophe. In this context, there are several events that have been repeatedly postponed, and in other cases there are shows that are confirmed but without an established date.

“Companies must return what was paid and promptly inform the forms of return, without placing conditions on consumers”, Jean Pierre Couchot, deputy director of Sernac, points out to BioBioChile, who adds that companies must inform in a timely manner if an event is suspended and the ways to return the money.

Emblematic cases are that of Metallica and Lollapalooza, two of the massive events most anticipated by the national public, which despite being confirmed, there is uncertainty about whether they can really be carried out.

The question that then arises among fans is what happens to the tickets they have already bought.

2020 was going to be an extremely fruitful year in terms of concerts by international artists in our country.

Michael Bublé, Metallica, Kiss and former One Direction Louis Tomlinson, among many others, they were going to be just some of the events that were scheduled for last year.

However, what no one expected is that a pandemic would affect the entire world with serious consequences.

Since the COVID broke out, more than 4.5 million people have died globally, triggering serious consequences in all kinds of areas.

And one of the industries that has been affected is entertainment. With restrictive measures on international flights, border closures and the impossibility of having large crowds of people, the producers were forced to make decisions regarding their scheduled events.

This is how in Chile, a country that has become an important place for tours of international bands, thousands of fans have kept their tickets in hand due to the constant rescheduling of concerts. In other cases, rightly, it has been chosen to cancel them.

Thus, doubts immediately arise: What if I already bought my ticket? Can I request a refund of what I paid if I will not be able to go on the new date of the show? What are the obligations of the producers and ticketeras?

Once the covid arrived in our country, the National Consumer Service (Sernac) recalled through its official platform that the law establishes that consumers They have the right to have everything paid back. An important point to keep in mind is that this includes the famous service charge.

“If there is a certain date for the rescheduling of an event after the suspension, the company could offer that alternative to consumers so that they have access to a service equivalent to what they had bought, including the possibility of transferring the ticket or entry to another person ”, Clarifies the organism.

During this year, Sernac has received 740 claims related to concerts.

78% of the cases refer to the sale of tickets, the most demanded being the difficulties to terminate the contract, such as requests for refund of money for cancellations of events.

In this scenario, Punto Ticket leads the list with 403, followed by Ticketek with 103, both firms with an important presence in the industry. Much further back are Live Concerts Group (31), Passline Chile (23), Ticketpro (18), Ticketmundo (12), Ticketplus (12) and Tiendas Hites (12).

In a statement sent to BioBioChile, Jean Pierre Couchot, deputy director of Sernac, indicates that although the events were suspended due to the health emergency, consumers cannot bear this cost.

“This implies that companies must return what was paid and promptly inform the forms of return, without placing conditions on consumers,” he says.

“On the other hand, considering that this activity is being reactivated after the improvement of sanitary conditions, if there is a certain date for the rescheduling of an event that was suspended at the time, companies can offer that alternative so that people can access to a benefit equivalent to what they had bought, including the possibility of transferring the ticket or entry to another person ”, he adds.

“The important thing is that companies must inform in a timely manner if an event is suspended and the ways to return the money, or if said event has been rescheduled and the new date for its realization,” he points out.

In this sense, Couchot points out that considering that there is still uncertainty due to the fact that we are still in a pandemic, ” companies must be flexible and give all the facilities to consumers ”.

“As Sernac, we will be monitoring the behavior of this industry, and in case of detecting situations that affect consumers, we will take the measures that we consider pertinent to defend them,” he warns.

“In the event that companies do not respect the rights of consumers, the call is to make complaints or citizen alerts at www.sernac.cl or by calling toll-free 800 700 100”, he points out.

Shows that are still waiting

It was in August 2019 when Metallica announced their long-awaited return to Chile. The legendary North American group would perform for the first time at the National Stadium, with a concert originally scheduled for April 15, 2020.

Unsurprisingly, the fizz generated by James Hetfield and company made the tickets sell like hot cakes.

But the covid said otherwise. After the beginning of the pandemic, the group decided to postpone their tour of South America. “We are putting safety, isolation and social distancing first, but not forever!” They indicated at that time.

The new date was scheduled for December of the same year. However, there were few who saw possible that the show could actually be carried out due to the rapid advance of the covid. In effect, the tour ended up being postponed again. Today, the event is still on, although without a scheduled date.

On the site of Ticket point It is detailed that, precisely, the sale of tickets to see Metallica is still in force although without an established date.

“Punto ticket, commissioned by DG Medios, will send the final entry by the same means when there is certainty about the date on which the event can be held,” the statement reads.

In this way, once the day on which the show will take place is confirmed, customers will be able to download the electronic ticket. Similarly, it is added that those who want their money back should contact customer service.

“These terms are valid for tickets purchased after February 18, 2021,” they explain.

They give everything back

Consulted by BioBioChile, from Punto Ticket they confirmed that the tickets for this concert are still valid.

“It is important to be clear that the process for returning money to customers is established by the producer of each event, we are the agent that complies with the instructions of the return process and their respective deadlines as instructed,” they clarify from the ticketera.

In turn, the company highlights that, in its case, they return the full amount of the ticket, including the service charge.

According to a survey conducted by Punto Ticket last July, 84.8% of the public in Chile is willing to attend a concert in a pandemic, as long as sanitary measures are respected.

In turn, 90.9% were in favor of rapid tests before entering a show.

For their part, DG Media indicates that the final date will be informed in due course, “since currently the band does not have an exact date of arrival in Latin America, due to the Covid-19 crisis that is still afflicting worldwide.”

“The return process is open from the moment it was rescheduled without a time limit until now,” they emphasize, indicating that if you have any questions you can enter puntoticket.com/metallica.

Another emblematic case that has attracted great interest is that of Lollapalooza, a massive event that was originally going to take place in O’Higgins Park on March 27, 28 and 29, 2020.

As expected, the festival was suspended, remaining for November 27, 28 and 29 of the same year.

Sebastián de la Barra, director of the Lotus production company, which is in charge of Lollapalooza in Chile, comments that they have felt somewhat left out as an industry.

“The truth is that today our sector feels that there is discrimination with respect to other industries such as sports. A health bubble is still not allowed as is allowed, for example, to the Brazilian team that came to play against Chile ”, he adds.

“We believe that international artists should be able to come with sanitary bubble to our events, we believe that the capacity is fundamental, there is already too much empirical information in the world that the Minsal already has several weeks ago, of cases such as the Lollapalooza Chicago that was a powerful example for the entire United States to open, with full capacity and without restrictions, only requiring a negative PCR or a mobility pass ”, he remarks.

In that sense, he acknowledges that they are on the verge of making an announcement about the expected music festival, although at the moment he did not specify what it would consist of.

“We are always in line with Sernac, and obviously we owe ourselves to the fans of our shows. And in that sense, when conditions change, we offer a return process. In Lollapalooza we have done it several times as in other events that have been postponed, and the people who have wanted to, have obtained all their money back ”, he explains.

Our comments are a space for conversation and debate. We welcome constructive criticism, but we reserve the right to remove comments or to block users aggressive, offensive O abusive.