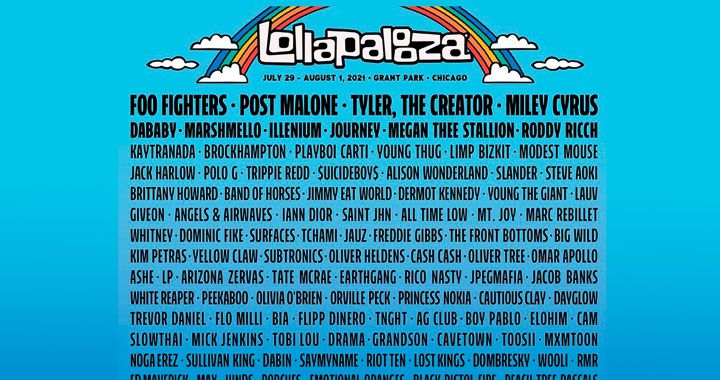 It is official, after so much waiting, the organizers of Lollapalooza, one of the most acclaimed music festivals, announced that the event will be held en masse from the July 29 to August 1 of this year, in the Grant Park in Chicago.

This news caused a stir, especially because in 2020, this massive party had to be canceled due to the global pandemic by Covid-19.

You can also read: They went to a rave on an island and could no longer return due to COVID-19

So far it is known that the festival will receive more than 100,000 attendees for each of the days that it lasts. And to the surprise of the fans, the poster with the invited artists is already visible and the purchase of tickets is already enabled.

It is expected that the edition of this Lollapalooza be a success, as it will celebrate its 30th anniversary amidst music, spotlights, colors, fun and lots of diversity.

Some of the artists and bands invited to this great event are Foo Fighters, Post Malone and Miley Cyrus, who head the bill.

Maybe you’re interested: Zoé and Alejandro Fernandez together ?: They will premiere a new song

At this point in the note, surely you are wondering about the security measures to prevent infections by Covid-19 sprout in the middle of the party, and for the good fortune of all, Only those who have a COVID-19 vaccination certificate or, where appropriate, the results that the test came out negative will be able to enter. This measure was reported by Lori Lightfoot, Mayor of Chicago.

Notwithstanding the above, the event will feature Centers for Disease Control and Prevention (CDC), so that attendees feel safer and can fully enjoy this celebration.

A festival with a mark on the world

Lollapalooza It was first performed in 1991 and both the United States and Canada were part of the tour. After that he made his first appearance in chili, thus becoming the first country in Latin America to have an event like this.

Finally, countries like Brazil, Argentina, Germany, France, Sweden and Colombia have been participants in this party, in addition Lollapalooza owes its success to the fact that it has received artists of international stature such as: The Killers, 30 Seconds To Mars, Artic Monkeys, The Black Keys, Imagine Dragons, Kings Of Leon, Calvin Harris.

You can also read: They escape from asylum to go to a heavy metal concert