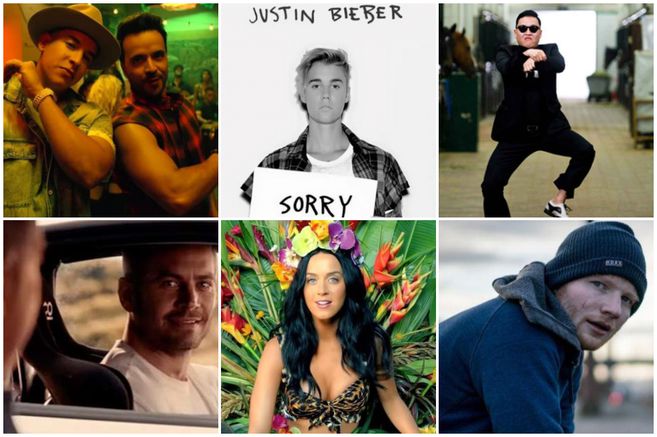 Currently YouTube It has endless musical content, some have reached thousands of views, others millions, but what are the videos with more than 4 billion views? Here we show you.

This is perhaps one of the most watched music videos in history. The song, released to promote the seventh installment of the famous saga “Fast and Furious”, Was also a tribute to the late actor Paul Walker, who played Brian O’Conner in the series and lost his life in a car accident.

You may be interested in: Songs by Daddy Yankee and Bad Bunny, among the 500 best in history

The video was the most viewed on the platform between July and August 2017, and managed to dethrone “Gangnam Style”, but then the success of “Slowly”Came to snatch the first place. This video is one of the few that has been viewed more than 5 billion times.

This video made history by being the first to be viewed more than a billion times on YouTube, and one of the most surprising factors was that it managed to reach that number in less than six months since it was uploaded to the platform in July 2012.

It then became the first video to hit 2 billion in 2014, and although today more than 100 videos have been viewed more than 1 billion times, “Gangnam Style” remains one of the most popular of all. time.

The video for “Despacito”, the single by Luis Fonsi In collaboration with Daddy Yankee it garnered 6.5 billion views that put it in one of the most viewed videos of the last four decades. In 2018 it was the most watched video in the world with more than five billion, which earned the performers a Guinness World Records title.

You may be interested in: Lowe León and Mateo de Dios, present premieres that sing to regional music

Shape of You – Ed Sheeran

The video for the single “Shape of you” became the second video in history to reach 4.5 billion views in YouTube. It was released on January 30, 2017 and was number one in 34 countries. This also became one of the most played songs on Spotify with 2,031 million. It also sold 27 million copies.

It is the single “Sorry”, which belongs to the album “Purpose”, which led the Canadian Hot 100 list for seven weeks, while on the Billboard Hot 100 list it remained for three weeks in the United States. The video has reached more than 3 billion views. It was first published on October 22, 2015.

The song published in 2016 by the American artist Katy Perry it reached more than 3.4 billion views and was used as a campaign theme for Hillary Clinton. The song talks about emancipation from a dominant relationship. The success is part of the album “Prism”, which was made and performed by a woman.

You may be interested in: Juanes kicked off his “Origen” tour with a concert in Miami

The single was performed at halftime of the Super Bowl in 2015, which surprised by appearing mounted on a giant metal tiger that walked, which made reference to the theme represented in the video clip.

The song has more than 4,292 million views. The song was released on November 10, 2014 and the video on November 19 of the same year, which had the direction of the same Bruno Mars. It won two Grammy Awards, including Record of the Year. It was about 14 consecutive weeks at number 1 on the US Billboard 100 The song reached number one on the charts in other countries.