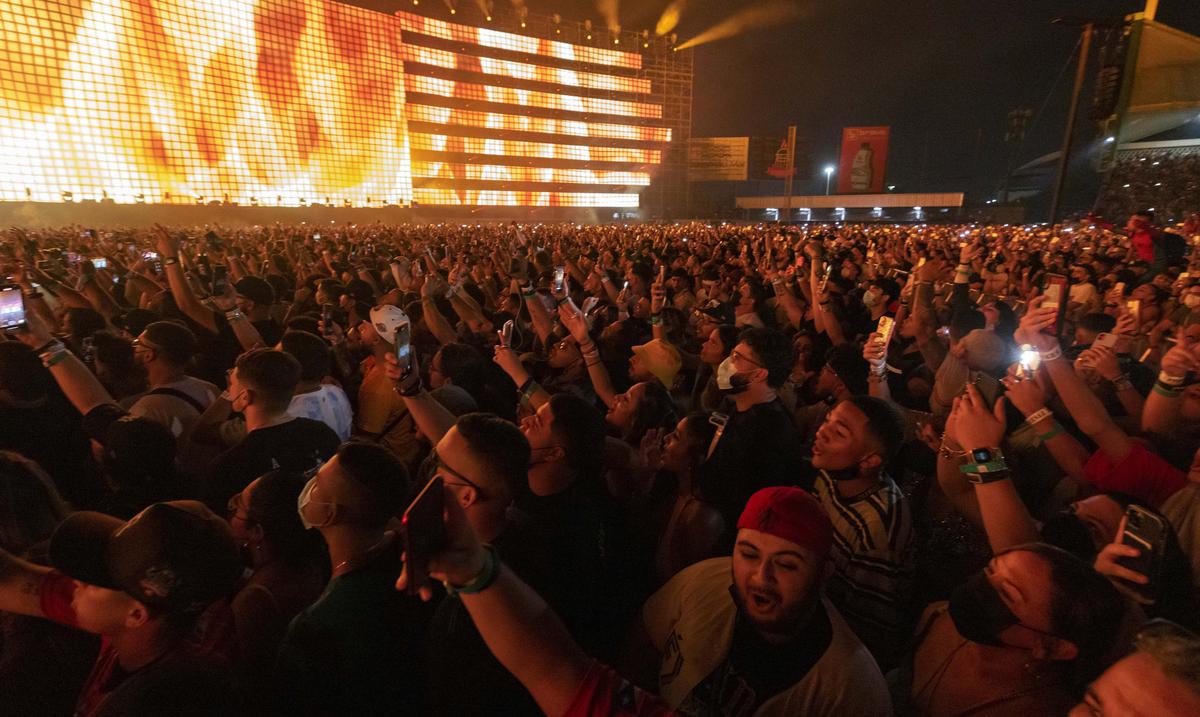 Much has been said about the first performance of the concert series “P FKN R” from the urban singer Bad Bunny, which took place last night at the Hiram Bithorn Stadium, in San Juan.

Beyond the logistics problems in terms of the organization of the event, the consensus is that the show offered by the artist fulfilled what was promised, as evidenced by the dozens of videos that the attendees have uploaded to social networks, praising the production musical.

One of the moments that the general public has stood out for being emotional, is the introductory visual that was projected prior to the exit of the so-called Bad Rabbit on stage. The audiovisual piece, directed by the filmmaker Arí Maniel Cruz, is a kind of tribute that Bad Bunny pays to his land, highlighting where his essence, his fiber, his strength, his mettle comes from.

It is a chronicle of love for his loved ones that he put together in collaboration with a great work team, starting with his fellow man from Veracruz, the Puerto Rican poet, rapper and journalist. Hermes Ayala, who sharpened the pencil well so that the words were a great collective beat of national pride.

“Benito (Bad Bunny’s real name) and Jan Anthony (his friend and assistant) came up with the initial concept and we were debugging it. I would tell you it was a brainstorming where a work team participated including Arí Maniel, the producer Julietta Rodríguez, Sigfredo Bellaflores, Andrei and Amanda Nemcik, Julio César Torres … ”, Hermes Ayala explained about some of those who collaborated to make the piece possible.

The award-winning actor Benicio, the bull recorded from Los Angeles the narration of the audiovisual piece, whose images were built from the text and according to the contribution of each person from the visual production team, starting with Bad Bunny himself, who suggested some figures and historical events in the country that appear in the video.

Moments in our sporting history -including the Olympic triumphs of Javier Culson, Monica Puig Y Jasmine Camacho Quinn– of our artistic and cultural history, our political struggles -from the nationalist revolution of 1950 to the Summer of 19′-, are reviewed in that chronicle of love, where Bad Bunny does not leave out our artists, from singers, composers, writers , actors and actresses, even our astronauts.

One of the figures that appears in the video, the olymic athlete Javier Culson, He expressed through his social networks grateful for the gesture of Benito Martínez Ocasio, Bad Bunny’s name, for including him in this tribute.

They send me these photos. It is an honor to be in a micro-documentary narrated by the actor Benicio del Toro in the historical concert of @sanbenito. Thank you for recognizing the achievements of each Puerto Rican athlete in your show. Excellent concert🏟🔥🔥 !!!! pic.twitter.com/fxzZQJ5FdW

“We wanted personalities or events to be seen that perhaps this generation, beyond the books, YouTube and what their parents tell them, do not know. That is why the poet Angelamaría Dávila, a Luis Rafael Sánchez, a Blanca Canales come out. There were many characters that Benito included and others that Benicio del Toro even suggested … it was like writing an exquisite corpse where everyone was paying, ”Hermes Ayala explained about the creative process of this piece.

The filmmaker Arí Maniel Cruz, for his part, reiterated that the entire concept of the video was from Bad Bunny himself. “Benito does whatever he wants, but everything has a concept and an intention and this is part of his concept and intention”, said the director, who also suggested some figures that appear in the visual, such as several writers -among them Mayra Santos-Febres and Ana Teresa Toro- and artists mainly from the diaspora, such as the deceased Pedro Pietri, Miriam Colón and Antonio Pantojas.

“A lot of people always stay, too many, but the idea was never to review Puerto Rico, rather it was an idea that was developed in the creative process. Even so, I am very happy with those who are there and I think it is a good intention to teach about figures like Hiram Bithorn himself that many may not even know who he was ”, commented the director.

When asked about why he understands that the visual has had such a moving effect on the public, he said that it is due to the “Benito effect”. “We are living an interesting time in our country and we are learning as we go, and Benito is Benito. This is part of a much larger event. The concert has many wonderful concepts and this is one of them. We open a window to say something that was already said. We put there (in the visual) what they taught us and we passed it on, ”said Arí Maniel Cruz.

Hermes Ayala, for his part, said that the public’s reaction is also due to the fact that the country has passed and continues to go through very hard times and this audiovisual chronicle is a respite, a bet on hope through a review of who we are , of those who have preceded us and of what we have achieved when we join forces.

“Perhaps it is as a reminder that we can unite if we propose it, that there is a history and precedents that prove it and that something can be done together beyond the differences because we are all in the same boat and that boat it is an island on top of a volcano, “he said.

It is also a way of recognizing, as Benicio del Toro points out at the end of the visual, that “it is not natural for us to be a legend because in the end there is no greater pride in each achievement than to say I am from P FKN R”.

Bad Bunny’s second concert at the Hiram Bithorn stadium will be held today, Saturday. 35,000 people are again expected to attend.