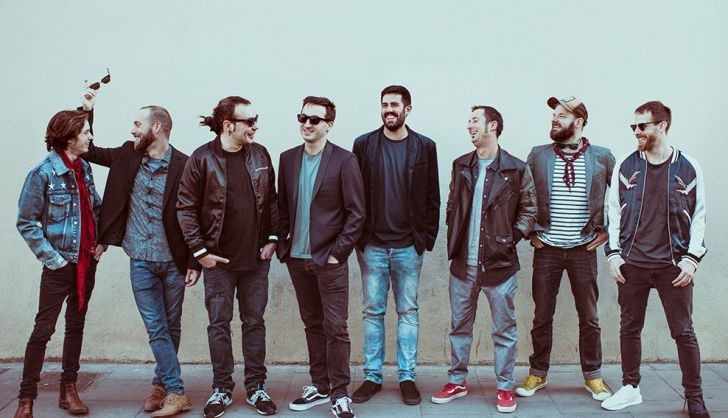 La Pegatina has become one of the leading music groups among the young (and not so young) of our country. On Tuesday, September 14, they will perform at the CAEM starting at ten at night. The Catalan group began to be known for the song ‘Mari Carmen’ but the explosion of ‘¡Y volar!’ it elevated them on the national scene. Now, they will arrive in Salamanca to present their album ‘Give it a turn’. Its singer, Adriá Salas attends SALAMANCA24HORAS before “one of the most special concerts of the year”.

What do you expect from the concert in Salamanca?

I believe that we have not been in many years. We were probably only once. In the Potemkin room. Yes, we have visited it many times because we felt like it, in terms of tourism. We were at USAL with Cadena SER, in a program with Angels Barceló, and people stopped us on the street. Salamanca is a university city and an environment that we love. It is going to be one of the most special concerts of the year.

All your songs show good vibes and good vibes. Is it a true reflection of your way of understanding life?

People are surprised because outside the concert we are calmer. But when we go up, we transform. Our life is this. When it comes to composing the songs, there is a contagious joy that we want to convey to the public. It even happens that we make sad songs and the music is happy.

“And fly!” It puts you in the great showcase of the world of music.

It’s amazing. It is a song that is three years old and has swept the level of listeners on Spotify. It is an Argentine collaboration of Los Caligaris, it has also made us grow in Latin America. It is the first time that I composed with Rubén at the same time. We have never done it like this. The formula worked.

That song is the moment of liberation that we all feel sometime and the wound closes.

It is so. As you said. I have never felt so free as when I have come out of a problem of which I was not aware. Once you leave it behind, you are thinking about yourself and you are done. It is also a toxic relationship, it does not have to be loving, or some situation that you are routinely there without knowing why. It is feeling free.

But La Pegatina is much more than “And fly!”. What are your own favorite songs?

We depend. The new ones always become the favorites. Now, for example, from the last album ‘Give it a turn’ the ones we like the most ‘Always asked you’, ‘I’ll see you when I want’ and ‘Lena’. They are not the best known but they have something special for all of us.

The pandemic has been very hard for everyone. Also for artists. It was also a good time to force yourself to stop and be more creative.

For us, who are in an inertia of playing non-stop for the last eighteen years and we never had to, at most to take a month off, it has been important. Suddenly we were forced to stop when we had a hundred-pin bowling European and international tour. It was a big bitch. Because on top of that we were going to travel and grow up abroad. It was a challenge that we wanted. But you think you can’t live without playing and you really can. Last summer was the first summer we had a vacation. We could go to the beach for a week with colleagues. It was a surprise. We were used to summer being work. You don’t have to be obsessed with the project and you also have to experience other things. Not only do you have to put all the energy in La Pegatina but also in family, friends and hobbies. Now we try to balance music with friends and family. Another lesson was to prepare the songs for a record quietly at home. Create songs and that each one can have melodies, patterns … we have had time to create and not take it out in three hours. That has made us be better and have more quality.

What does it mean for a group of artists to return to a stage and, little by little, the public come back?

All the groups talk about reuniting with the public. After so many years playing the peninsula, you have many friends and you are happy to see people. The audience is seated but has a huge happy face. It is just as pretty. We have prepared a show with a little less cane because otherwise it would be more problematic for people. If you do a concert adapted to that, people are going to enjoy it. Everyone who comes is more attentive to the show than other times, because you can only be in the chair and you cannot go to the bar or dance with colleagues.