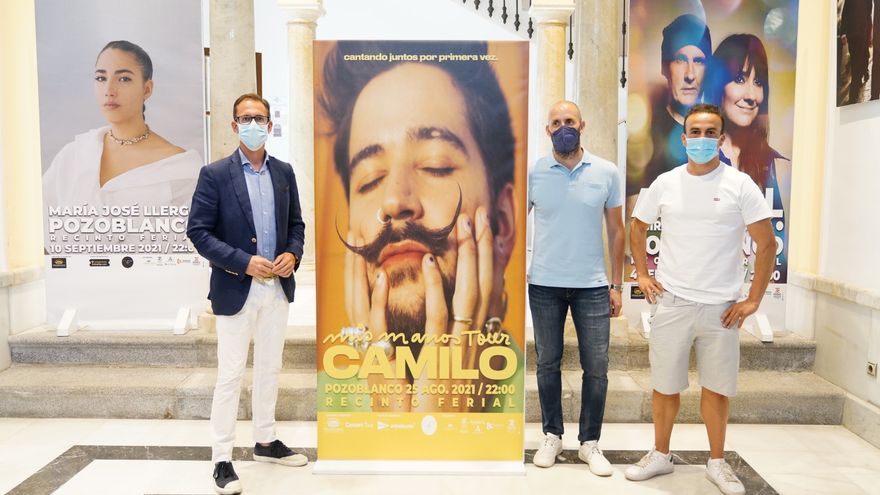 Presentation in Pozoblanco of the concert of the artist Camilo.
CÓRDOBA

The Colombian singer Camilo Echeverry, one of the great stars of current international music, will be one of the headliners of the fourth edition of the Slow Music Festival of Pozoblanco, which this year will be held at the end of August in the fairground of the Cordoba town. The mayor of Pozoblanco, Santiago Cabello, has explained that the negotiations to bring the artist have been complex, since his Spanish tour has limited dates, but has explained that he always It has been an objective of the Consistory being a singer “that transfers messages full of hope to society and in defense of the essential values ​​of the human being, something very necessary in a time of difficulties like the present one ”.

The mayor has also expressed that the presence of Camilo as an international star it is the finishing touch to a festival who trusts that can provide an important benefit to service companies, restaurants and accommodation in the municipality and the area. Hair has finally highlighted the importance of Slow as a tourist attraction and has underlined the rapid consolidation of this initiative, through which, in its first two years of existence, leading musicians such as Manuel Carrasco, Miguel Bosé, David Bisbal, Dani Martín or Pablo López.

The Colombian artist thus joins the local singer María José Llergo and the Amaral group, in the absence of unveiling in the next few days the rest of the shows that will be part of the festival. For his part, the Councilor for Tourism and Celebrations, Eduardo Lucena, has been very satisfied that Pozoblanco could be one of the stops of the Spanish tour of the Colombian singer. He has also reported that this fourth edition is presented with various novelties, including a new location for the festival, which will take place on the municipal sports courts of the fairgrounds. Also this year the festival will extend its duration, taking place on five different days for three consecutive weeks, from August 25 to September 10.

This new location has been decided with the aim of reinforcing security measures against the coronavirus, which will have an important device that includes the use of a mask at all times, capacity adapted to the regulations and placed on chairs, taking temperature when entering the enclosure and staggered access and exit.

The festival will also feature with an important special operation made up of private security professionals, effective Local Police and Civil Protection and the members of the traffic operation that the Civil Guard will activate for these days. The device also includes an extensive cleaning display.

Lucena has also defended the Slow Music Festival “As one of the best summer musical events in southern Spain and a tourist attraction for Pozoblanco, since it projects our image abroad and allows great economic dynamism since there are thousands of people from abroad who come on those days to share with us those nights of music, fun and festive atmosphere ”.

The composer and lyricist Camilo, author of internationally successful songs such as Rich life O Millions, will perform in the town of Los Pedroches on August 25, so it joins a poster in which the Aragonese rock group Amaral (September 4) and the Pozoalbense singer María José Llergo (September 10) were already announced . “The proposal is diverse in terms of musical styles and we think that it is very attractive, a demonstration that the Slow is a consolidated appointment of the Pozoblanco summer and that it returns with force after the forced break in 2020 ”. Tickets for the three concerts go on sale on Thursday, July 15, starting at 12 noon. Tickets for Camilo’s concert are available on the El Corte Inglés website and tickets.com and for María José Llergo and Amaral they can be purchased through the website www.progeventsentradas.com.