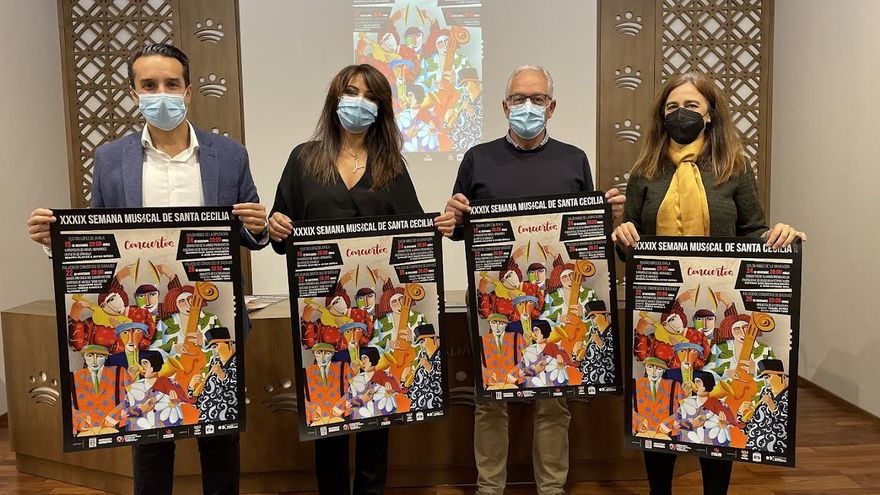 The vice president of the Provincial Council, the directors of the conservatories and the deputy for Culture, yesterday at the presentation of the Holy Week of Cecilia in Badajoz.
S. RODRÍGUEZ

The 39 Semana de Santa Cecilia will offer four free concerts, in three different stages of Badajoz, from November 15 to 29. The first vice president of the Badajoz Provincial Council, Ricardo Cabezas, presented yesterday the program of this event, organized by the Conservatories Superior Bonifacio Gil and Professional Juan Vázquez, both dependent on the provincial institution.

On November 15, López will host the concert that opens the cycle, ‘About Miguel Hernández, a poet from Orihuela’, a recital that combines music and poetry with Begoña Olavide and Javier Bergia. The Music Band of the Superior Conservatory will perform on November 22 at the conference center under the baton of maestro Salvador Rojo Gamón and will feature Sergio García, interpreting the ‘Rhapsody of Mark Watters’, and with Alfonso Saiz, for ‘Concert Number 3 for Clarinet and Band’ by Óscar Navarro.

The third concert will take place on November 24 in the plenary hall of the deputation, in which the three students who obtained the end of degree award at the end of their musical studies at the Higher Conservatory of Music will perform a recital in which each of them will intervene as a soloist. Its about clarinetist Alfonso Saiz, pianist David Mogaburo and saxophonist José Nisa.

The cycle will close on November 26 at the conference center with a program by the Extremadura Orchestra under the baton of maestro Miguel Romea and with the soloist Lucero Tena, artist of the castanets. All concerts will begin at 8:00 p.m.

Cabezas, who appeared alongside the directors of Bonifacio Gil and Juan Vázquez, Rosario Mayoral and Yolanda Sánchez, respectively, valued the work of the conservatories and highlighted the excellence of this cycle.