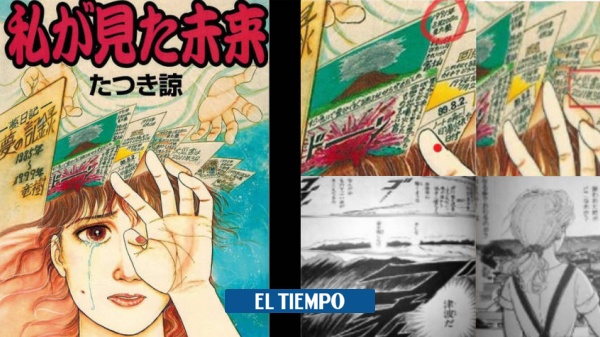 If in ancient times the Greeks and a few Romans came to the oracles To ‘know’ the future, ‘millennials’ should not stop watching or reading cartoons.

At least that’s the feeling all fans of ‘The Simpson’ seeing how the yellow characters seem to be one step ahead of reality.

Well, for those who have come to think that the fate of ‘Homer’ and company may be the same as humanity, a strange ‘manga’ has just been discovered that seems to be written by the hands of Nostradamus: ‘The future I saw’.

This book, a compendium of comics designed by Ryo Tatsuki, a mysterious Japanese artist, has taken on a certain relevance inside and outside Asia for her surprising ‘clairvoyance’.

(You may be interested in: This is how a young woman kidnapped and abused for 18 years by a pedophile was saved).

As it has been learned, the pages of that manga have ‘anticipated’ four momentous moments in history of humanity.

What was the last of these? The coronavirus.

And the most worrying thing is that, from your list, at least two missing.

The story of the rare comic began with strange dreams that Tatsuki began to have in the eighties. It was so much the impact of those ‘dream revelations’ that leaving a visual record of them was unavoidable.

Hence, driven by his drawing spirit, the ‘manga’ become the best option.

The mysterious manga was published in the late 90s.

With this technique, he captured at first three impressive events that, supposedly, he lived in silence and did not share: The death of Freddie Mercury, the earthquake of Kobe in Japan and the death of Lady Di.

With no more time to lose, in 1999 he released a host of predictions immersed in his long comic ‘The future I saw’.

(Is incredible: This is what music made by a rat sounds like and what is a hit on Spotify).

From the historic singer of Queen, she dreamed that she died during two November 24: the one in 1976 and the one in 1981.

The fateful moment, in real life, came on November 24, 1991. Ten years after having two dreams separated by five years.

Blue lights are a phenomenon that often appears in earthquakes.

As he assured, Tatsuki felt, with fifteen days in advance, the premonition of the telluric disaster of 6.9 degrees of intensity that ended the life of 6,434 people in the city of Kobe, on January 17, 1995.

She, according to some Japanese newspapers, knew on January 2 of that year that in 2 weeks tragedy would occur.

(Inspiring: After four years, a quadriplegic managed to stand up without help).

The death of Princess Diana has been one of the most mysterious in history.

It is said that the mysterious death of Diana of Wales, Prince Charles’s first wife, came to Ryo Tatsuki’s unconscious in 1992.

“Diana? Deceased?”It seems to be read in a note in his drawings of the time.

The pandemic changed the way we relate to each other.

The most impressive fact, due to its advance in time and worldwide impact, it was the coronavirus.

“An unknown virus will arrive in 2020, it will disappear after peaking in April and will reappear 10 years later.”He wrote on his sleeve.

It is still somewhat imprecise since in April 2020 nothing disappeared and, on the contrary, it became more acute and spread throughout the world. Covid-19 is still being dealt with today, beyond the significant advance in the vaccination process.

(Can read: ‘I shouldn’t have waited that long’: tiktoker without vaccine before dying of covid).

The ‘two moments’ that remain pending

According to Tatsuki’s drawings, on August 20 there was going to be an eruption of the Monte Fuji, a volcano that has not had risky activity for three centuries.

Mount Fuji is a symbol of Japanese culture.

Fortunately, no natural disaster occurred because a concert was scheduled that day near the mountain.

The other pending issue, according to the ‘manga agenda’, is a megaterremoto en Nankai, also in Japan.

That region, located on a geological fault, has not seen inclement movements since the 15th century.

According to some niche and mystery portals, Ryo Tatsuki is already away from the revealing dreams.

His book seems like a relic since, practically, it is impossible to get it.

Some of the people who have it have shared their revelations, well, whether they happen or not, the future belongs to everyone.

– Video: Timo Werner and all the ‘impossible to miss’ goals he didn’t score