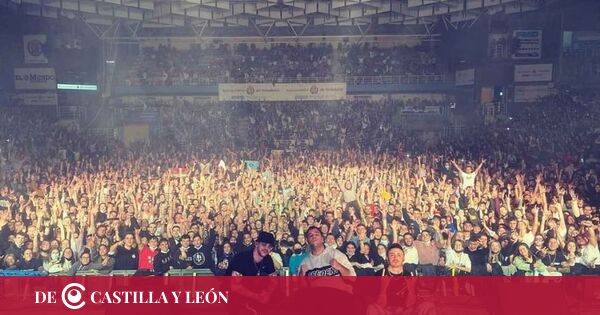 More of 4,500 young people vibrated yesterday in Valladolid with the concert offered by Natos and Waor, the fashionable couple, at the Pisuerga sports center. But above the success of the performance, what has unleashed the controversy is an image that the group itself shared on their social networks of the concert. In it you can see a crowded sports hall and most of the spectators without security measures against the covid. That is, neither masks nor safety distances.

An image that has scandalized the specialist in preventive medicine and secretary of the Committee of Experts of the Board, Ignacio Rosell, who has not hesitated to share it on his Twitter account, showing his concern and his fine irony. Along with the image shared by the Madrid rappers, Rosell wrote: “This was yesterday in Valladolid, the province with the HIGHEST incidence of # COVID19 in Castilla y León, with the #UCI at HIGH risk of occupation, @NatosyWaor concert.” To later thank the only person who appears in the image with a mask. “THANK YOU to the girl in the RED circle, whoever you are. Epidemiologists today cry a little less thanks to you ”. He has finally rectified since he has detected one more. “I RECTIFY: they are 2️ girls with masks, THANK YOU (There were 4500 people at the concert)”.

This was yesterday in #Valladolid, the province with the HIGHEST incidence of #COVID19 in Castilla y León, with the #UCI at HIGH risk of occupation, concert of @NatosyWaor.
THANK YOU to the girl in the RED circle, whoever you are. Epidemiologists today cry a little less thanks to you. pic.twitter.com/jWVyAfOGmr

Among his almost 23,000 followers, There have been many who have also wanted to denounce the organization of the concert. For their part, the singers, together with the image of the concert, assured that they had no words to describe what they experienced in Valladolid. “You are the best”.

It should be remembered that although the Junta de Castilla y León has not imposed any restrictive measure in recent weeks, as other Communities have done, some state regulations are still in force, and among them is the use of masks indoors and keep a safe distance.