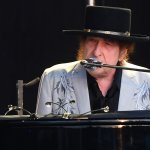 The Patricia and Phillip Frost Art Museum in Miami has, thanks to a donation, the first work of the famous singer and plastic artist Bob Dylan to be exhibited in a public space in the United States.

The untitled sculpture has the shape of two doors and is made of iron and antique objects, according to a statement from the museum, in which “Bob Dylan: Retrospectrum” was inaugurated last November, a retrospective of the visual work of this Rock music legend and Nobel Prize winner for Literature.

“Untitled” has been posted at the entrance to the museum which is based on the campus of Florida International University (FIU).

According to the cultural institution, this is Dylan’s first public art work in the United States.

“Dylan’s love of visual metaphor exemplified in these metal gates reminds us that creativity and vision know no bounds. Just as education provides a gateway to academic achievement, this sculpture invites our visitors to learn through of art,” he said.

The donation of the sculpture followed the national debut of “Retrospectrum,” a show of more than 180 works that was on display at the Frost Museum from November 2021 to April 2022.

It was the “widest and most detailed” exhibition of the musician’s work “ever seen on American soil,” according to the FIU institution.

The exhibition of this American musician, author of classic compositions in the history of contemporary music such as “Blowin’ In The Wind”, “The Times They Are A-Changin'” and “Like A Rolling Stone”, opened on 30 november.