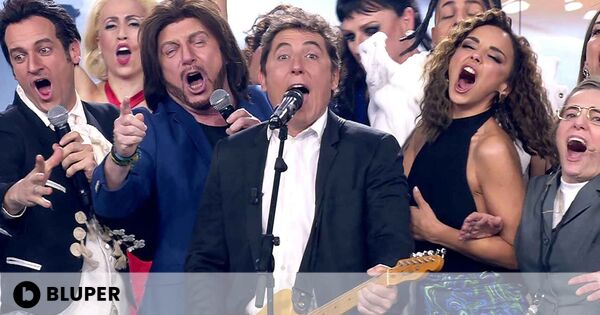 This Saturday, January 1 Your face is familiar to me go back to tv after the Christmas Eve break. It does not, however, with a new installment of season 9, despite the fact that we will see Lydia Bosch, Agoney Hernández, Rasel The Loles Leon. And it is that the Gestmusic imitation contest will offer a special delivery, a new New Years concert, in which current contestants will perform duets with others from previous years.

So for one night Carlos Baute, Melody, Mario Vaquerizo, Jorge González, Anabel Alonso and Edu Soto They will return to the set in which they competed long ago, and with them they will also debut Luis Fonsi and Rosario Flores as guests.

Rosario and Fonsi, however, will not imitate. Lolita’s sister (who is once again low in the jury) will sing with María Peláe, and Luis Fonsi will sing his song ‘Vacío’ with Agoney, who will once again get into the skin of Raw Alejandro.

For its part, Lydia Bosch to join Anabel Alonso to sing the song ‘I’m happy’ from the soundtrack of The call Y Nía will sing with Edu Soto like Celia Cruz and Vicente Fernández.

Eva Soriano will be Lady Gaga (who Agoney recently impersonated) and will sing with David fernandez as Joseph Gordon-Levitt, and Loles León will sing with Mario Vaquerizo a song from Las Deblas, a duo that popularized ‘You are not a matador, sir’.

Pablo López and Juanes will step on the stage through Rasel and Jorge González, Y Los Morancos They will make a new imitation of Pimpinela, a duo that Los Chunguitos or La Terremoto de Alcorcón have already emulated.

Also return to the contest Carlos Baute, but to sing like himself the theme ‘The gossip’, in which Melody will sing like Chenoa. The members of the jury will also do different imitations, and they will even start singing Manel Fuentes, the presenter.

Thus, Antena 3 consecrates the New Year’s concert of Your face is familiar to me like a new television tradition, that started in 2017. Until then, the program used to have special galas loose, for charitable purposes on some occasions, and on others to find new contestants, as was the case with Lorena Gómez, who won a delivery that served as a passport for season 5.

The chain thus enhances its brand image, creating events that the viewer will look for on specific dates, and that could be added to other special Christmas programs such as Happy New Year Neox, which this year had its best data in the last five years.