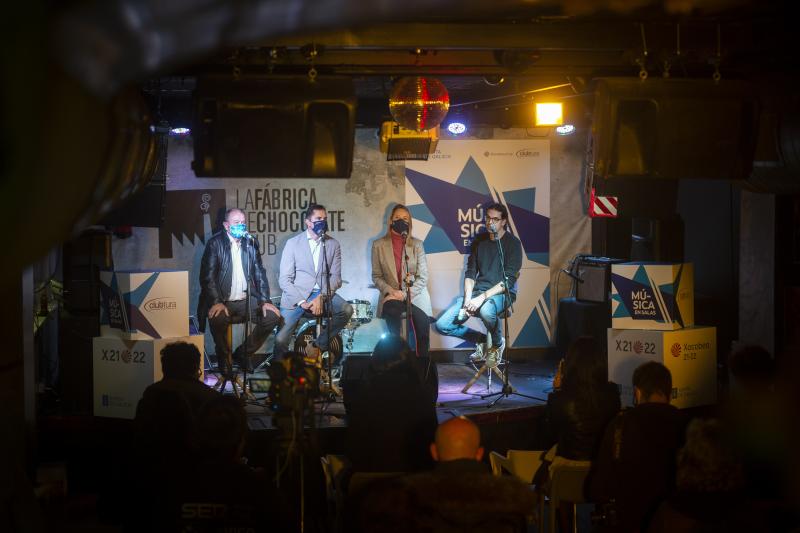 The Xunta de Galicia reinforces its support for the live music sector with the launch of a new cycle that, under the title Music in theaters, will offer 135 concerts by 115 Galician artists and bands for two months in 19 venues in the four provinces . This initiative, to which the Ministry of Culture, Education and University allocates a budget of 200,000 euros, is the result of the agreement signed with the Galician Association of Live Clubtura Music Rooms to promote the recovery of live musical activity in this type of spaces, in addition to having the complicity of Live Music as an entity that represents the interests of the performers.

The objectives and the programming of Music in theaters were detailed today in Vigo during the presentation in which the territorial delegate of the Xunta in Vigo, Marta Fernández-Tapias; the director of the Galician Agency for Cultural Industries (Agadic), Jacobo Sutil; the president of Clubtura, Alberto Grandío, and the manager of Live Music, Manuel Alonso. The event, which took place at La Fábrica de Chocolate Club, featured a brief musical performance by Los EP, a group that will perform in this same venue in Vigo on the 16th.

Key spaces for the music industry

The head of Cultural Industries explained that through this agreement with Clubtura, the only Galician association that groups and represents the interests of venues that program live music, the Xunta recognizes in these spaces their relevant role in the development of the industry musical in Galicia.

In this same sense, he recalled that Music in theaters joins the measures already contemplated in the regional plan for the reactivation of culture to influence the revitalization of a sector that suffered the practice of paralysis during the health crisis. This is the case of the extraordinary line of subsidies directed at private venues legally enabled to organize musical shows with the public, through which the Xunta supported the celebration of nearly 400 other concerts in the last five months with an investment of 560,000 euros in the 22 awarded spaces. In addition, these types of establishments had already been recipients of specific support in 2020 through the program Directos Xacobeo’21 in Salas, which had to be rethought due to the evolution of the pandemic and move to recording concerts without an audience with its subsequent dissemination through social networks.

For her part, the territorial delegate of the Xunta in Vigo, Marta Fernández-Tapias, stressed the importance of this series of concerts being presented in Vigo “cradle of great musicians”. An initiative that, according to his words, will be decisive for the enhancement of the Vigo music scene, with the performance of 16 groups at the Chocolate Factory and at the Kominsky room. “Groups that now more than ever need our support in this return to the stage,” he concluded.

Music in rooms raised the cloth at the Garufa Club in A Coruña on the 4th with Lee Rue Band and his approach to jazz from the 20s of the last century and will end on December 19 at the Club Clavicémbalo de Lugo with rock and blues of the Martins Aneiros Band.
Between the two dates, references of Galician jazz such as Juyma Estévez Trío, Sumrrá or dATrío, names of soul such as Adrián Costa or urban music such as Youcanthide will perform in this cycle. Also part of the program are representatives of hip hop in Galician such as Xeva, Grima’s grunge and metal proposal, Tony Lomba’s light music, The Rapants indie, Belém Tajes’s journey to his Galician-Argentine origins or I am energetic, with a feminist and social perspective, by Haberlas Hailas, among many other proposals.
The calendar with all the appointments of Music in theaters can be consulted in the agendas of the Culture of Galicia and Agadic websites.