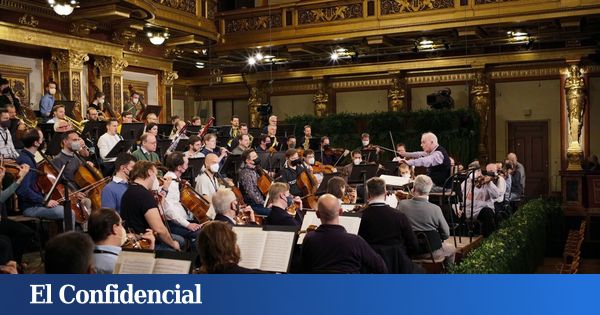 “The public attends a Strauss concert expecting to be in a good mood,” Johann Strauss II once wrote to his brother Eduard. For decades the work of the Strauss, the great Viennese waltz dynasty, has monopolized the early hours of the year. And the assistants of the New Years Concert They recognize the final roll when they hear it, they know that the director will turn to them to clap the ‘Radetzky March’. They do it with the same interest as those who listen to it for the first time, that’s how powerful tradition is.

The piece by Johann Strauss I, father of Johann II, Eduard and Joseph, will arrive on January 1 under the baton of Daniel Barenboim. Nothing new under the sun. But that martial orchestration that is heard every year, with the box, the winds and the contrast in volume as the protagonists, is not the one that the patriarch of the Viennese waltz devised. Since 2020, the Vienna Philharmonic board decided to change the arrangement of the piece to “give joy to the public and not remind anyone of any Nazi war, propaganda or ideas,” as stated by its press spokesman. al ‘Financial Times’.

And it is that the version that the Philharmonic has interpreted more frequently in the New Year’s Concert, until last 2020, It was signed by a prominent member of the Nazi Party: the composer Leopold Weninger. At the concert directed by Andris Nelsons two years ago, the end of the party culminated with the unavoidable ‘Radetzky March’, but with a somewhat different score.

The origin of the ‘March’ is well known. In 1848, the now old and famous soldier Joseph Radetzky from Radetz faced the army of the Kingdom of Sardinia in a battle near Verona. The territory, still dominated by the Austrian Empire, was the scene of an Italian insurrection that was put down at the Battle of Custoza. The Piedmontese thus signed a peace treaty by which the Austrian authority was reinstated. Radetzky’s great triumph was celebrated in One and the authorities asked Strauss Sr. for a composition to honor the military man. The result was the ‘Radetzky March’, one of the most recognizable and listened to works in the history of Western music.

In 1946, at the end of World War II, the German conductor Joseph Krips first introduced the ‘March’ at the end of the Concerto, which has since served as a traditional encore alongside the ‘Blue Danube’. Over the years, the musicians of the Vienna Philharmonic have added indications and correcting errors to that score, but always in a version based on the Weninger arrangement. Who was this musician and why does the Philharmonic reject his version because of its connection with Nazi ideology?

Leopold Weninger was an Austrian composer and conductor who, in 1914, published an orchestral arrangement of the ‘Radetzky March’ in Leipzig. That was the score that was in the Philharmonic archives in 1946, when Krips decided to offer it as a concert tip. Weninger was an active member of Adolf Hitler’s party since 1932, when he began to write numerous works on the Nazi regime.

Among them are marches and hymns such as ‘Jung-Deustchland’, ‘Sieg-Heil!’ or an arrangement for piano and voice of ‘Horst Wessel Lied’, the official anthem of the party, in addition to other works dedicated to the SA or Hitler.

According to the Vienna Philharmonic, Weninger’s version was the one in his archives, but over the years it was subject to modifications by the musicians. The case of the percussionists was special – the snare and cymbals are fundamental elements in the ‘Radetzky’. They based their later annotations on the testimonies they could gather from the musicians who played in the old Strauss Orchestra, Directed by the composer of the work and, later, by his son Eduard.

An article by Jeroen HC Tempelman, director of the Johann Strauss Society of New York, studies the differences between the various arrangements of the ‘Radetzky March’. In 2001, the conductor Nikolaus Harnoncourt, perhaps in a historicist zeal, he performed the original arrangement of the score by Johann Strauss I. The main differences from Weninger’s arrangement are in the role of wind and percussion, and in a more modest original orchestration — with fewer musicians and fewer varied – than the one that usually occurs at the New Year’s Concert.

However, the contrast that makes the ‘Radetzky March’ so characteristic (the same theme is repeated, first played softly, then with more force and usually accompanied by the clapping of the public) it did appear in the original score. Tempelman speculates that the volume changes were the idea of ​​Strauss, and not of later arrangers.

As of 2020, the Philharmonic decided to banish Weninger’s arrangement of its archives, instructing the institution’s library to gather in a new edition of the score the annotations accumulated over the years. In that year it was performed for the first time, under the baton of director Andris Nelsons.

Strauss, the Philharmonic and Nazism

During the rise of Nazism, the Vienna Philharmonic was a musical institution of great European renown. And with a ratio “Disproportionately high” of party members, as reflected in the investigations promoted by the same orchestra. In 1943, 123 musicians were Nazi militants (more than 50%) and two had been members of the SS. In 1938, 13 active musicians of the orchestra they were expelled for being Jewish or having Jewish roots. Of these, five were assassinated during the Holocaust and another two, during the war.

The New Year’s concerts have their origin in 1939, originally called the Johann Strauss Concert. As at present, most of the repertoire performed in them was made up of works by the Viennese family. Researcher Oliver Rathkolb notes that “the entertainment of ‘waltz music’ detracted from the increasingly daunting effects of World War II.” The Strauss family’s work, with its festive and joyous character, made these concerts a key piece of the leisure in Nazi propaganda.

In 1943, according to an article published by the orchestra, 123 musicians were Nazi militants (more than 50%) and two had been members of the SS

It was these concerts that associated the Strauss repertoire with Nazism, despite the fact that the author of the ‘Radetzky March’ was of Jewish descent. According to Rathkolb, Joseph Goebbels, Nazi Minister of Propaganda, tried to falsify the baptismal certificate of Johann Strauss I to hide his origins. And he quotes Goebbels’ personal diary to corroborate: “Some know-it-all has found out that Strauss is ⅛ Jewish. This should not be made public. First, there is no proof yet, and second, I don’t want the German cultural heritage to be gradually undermine … I am doing everything in my power to counteract this. It is the will of the Führer. ”