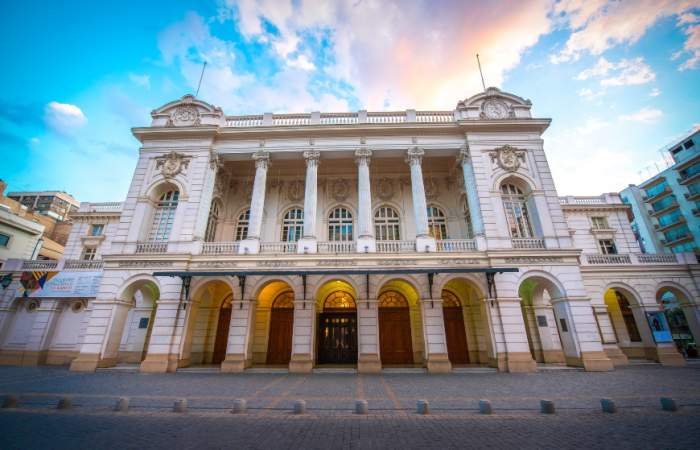 Did you know that the Municipal Theater of Santiago has its scenographic workshops in the Yungay neighborhood? A shed on Calle Herrera is the place where the magic of the montages is born, which are then shone on its historic stage.

There the scenography and props for his acclaimed works, an unknown place for many and that now will open its doors to the public for the first time, within the framework of Heritage Day 2021.

The face-to-face activity will take place on Friday May 28, with free guided tours by Cecilia Herrera, Community and Public Coordinator. In total they will be five tours, the first at 10.45 AM and the last at 2.45 PM, all with reduced capacity and, therefore, with limited places. In fact, you have to reserve a place through the Municipal Theater website.

If you cannot go or you are outside of Santiago, you can still add the Saturday 29, at 10 AM, to visit virtual guided which will be held in its historic premises on Agustinas street.

Be careful, the documentary will also be shown Hiddenby Gabriel Bucher (Sunday, 8 PM), which shows the work of the theater’s human team, from its illuminators to its stage sets.

MIM will reveal its secrets

Unlike the Municipal Theater that will have a face-to-face activity, the Mirador Interactive Museum (MIM) will perform a free virtual tour the Saturday 29 and Sunday 30.

It will be entertaining, because it is the first time that this institution dedicated to promoting science joins the Heritage Day, and it will do so with this tour of its YouTube channel to be held in two hours both days, at 11 AM and 5 PM.

Each tour will last 45 minutes and in these the members of the museum will take you through each of the rooms and will give unpublished details of this 21-year-old enclosure.

For example, they will relate architectural aspects that differentiate the MIM from other museums and data on its construction, such as that the Túnel Universo building was built with excavated earth from a busy meeting point in the capital.

That is not all, secrets will also be revealed such as the operation of the mechanism that its famous Seismic House, the one that accurately recreates the earthquake of 27 F. Likewise, doubts will be resolved, including how many nails has its Bed of Nails or if it is true that once there were live animals in one of its rooms.

Be careful, questions will be answered at the moment, through a chat that will open at the time of starting the tour.

The U. of Chile will have more than 30 activities during the three days that will run on Heritage Day 2021, which will take place between Friday 28 and Sunday 30.

Like last year it will take place so virtual, where you can follow talks, workshops and concerts. For example, him Friday 28, at 6.30 PM, the virtual platform of the Center for Artistic and Cultural Extension, which houses the Symphonic Orchestra and the Chilean National Ballet (Banch), will broadcast a program with a repertoire of national creators, such as the Violin Concerto, Op. 86 by Juan Orrego Salas, or Between tensions scored by Aliocha Solovera.

Likewise, the Banch will commemorate this date on sunday 30 with the conversation Dance in the air (8 PM), which will be led by its director Mathieu Guilhaumon, and who will review the 76 years of the company.

Also on Sunday, but between 10 AM and 6 PM, they will be astronomical workshops for children of six to 13 years. They will be in charge of the Department of Astronomy, and there the phases of the moon, black holes and exoplanets will be explained, among other topics that will be transmitted in their Facebook.

On the same day, but at 12 PM, a virtual concert with repertoire of María Luisa Sepúlveda (1883-1958), important composer, director and compiler of some iconic pieces, such as the song The air or the cueca The rose and the carnation, and who has been marginalized from historiography.

The transmission will be made by the YouTube channel of the Music Department, and in it the soprano Patricia Cifuentes, the pianist Leonora Letelier and the harpist Patricia Reyes, among others, will participate.

The Las Tarria sector and the Forest Park is one of the most important artistic centers of the Metropolitan region. There you find the GAM, the Museum of Visual Arts (MAVI), the National Museum of Fine Arts and the Museum of Contemporary Art (MAC), among other spaces.

They all group together in what they call Art neighborhood, a cultural alliance that carries out activities throughout the year.

One of them celebrates Heritage Day with events in each of the participating venues, such as the GAM which, among other things, will carry out a guided visit to the eastern cultural center. Friday 28, at 12.30 PM. On this tour, you will tour the building and modern art from the original UNCTAD III collection. Be careful, you must enroll in the GAM website.

That same day, but at 11 AM and 4 PM, the Routes Environmental heritage in the Forest Park, a tour for a maximum of 10 people who have registered in advance in the Barrio Arte platform. There, for about an hour, you will learn about the biodiversity of the place, how the river influences, and it will be discussed about the opportunities to face pollution.

For its part, the Museum of Fine Arts will show off with a workshop by Zoom for boys and girls from seven to 10 years old, called Experimental Log (with prior registration in the museum site). It will be dictated by the artist Paula Coñoepan, this Saturday 29, at 11 AM, and there they will create a work, using white leaves (the size does not matter), markers, pasticine or clay and masking tape or wool.

The hidden gem of the Alameda

Surely you’ve been a thousand times outside the san francisco Church, on the corner of the street of the same name with the Alameda, without knowing all the history that that place keeps.

Raised in by the Order of the Franciscans in 1618, in the heart of Colonia, its temple and its convent as a whole are the oldest building in the capital and in the country.

In addition, on its first floor the convent houses the San Francisco Colonial Art Museum, where there are liturgical objects, paintings and sculptures created for evangelization.

A true gem of the center that is currently closed, but that you can discover on Heritage Day 2021 through the virtual guided tours that the days will be done Friday 28, Saturday 29 and Sunday 30.

They will all be different and you will be able to know both about the same museum and about the heritage around the church and the convent.

To join these activities you must enroll in the next link.

Learn with the king of signs

The colorful signs of the old buses, those of the routes such as Matadero-Palma and Santa Rosa-Teniente Merino, had the stamp of Zenén Vergas, who learned the trade of typography from his father.

So iconic are they that later their art appeared in restaurants, bars, shops and even in the works of musicians like La Banda Conmoción.

That’s why they call him the King of signs, true living heritage that this Saturday 29 May, will tell all the secrets of his work in a free online workshop that will offer through the Instagram of Santiago Culture.

From 5 PM, there he will tell not only his beginnings in this work, but also some of the typefaces and techniques used to make his signs, which are already part of the imaginary of the Santiago neighborhoods.

The new museum of the Yungay neighborhood

On the corner of Compañía con Libertad, just in front of the emblematic French Barber Shop, a new space has just opened its doors that adds to the rich cultural offer of the Yungay neighborhood, the Workshop Museum.

Its about same which a few years ago opened in another neighborhood of Santiago, on Root street, Francis dittborn, a lover and collector of everything related to carpentry and wood.

Passion that turned into this place that for a couple of tables has been operating in a larger house and that, as its name reveals, houses a museum and workshop, where carpentry classes are held for all who are interested, whether they have prior knowledge or not.

If you have not visited it yet, this Heritage Day 2021 is a good opportunity to visit it, because this Friday 28 will have free admission, previously reserving in your Web.

There, young and old will be fascinated by a amazing collection of old tools, more than 800 pieces that together form a kind of journey through the history of carpentry and that at the same time are a celebration of ingenuity and creativity.

The most curious objects of firefighters

For this Heritage Day 2021, the Firefighters Museum -MuBo- prepared a program aimed both at the oldest and at girls and boys interested in their story.

Is about virtual tours through their social networks (all with the name of @mubochile), which between Friday and Sunday will bring people closer to the rich heritage of this institution with 157 years of life.

Thus, the three days and at different times will offer the online tour Curious objects, a kind of B-side of Firefighters, with unknown stories and objects from his collection that are true rarities, such as a fire grenade and a fire extinguisher.

Meanwhile, the activity for the youngest will also take place on three days and at two times, 11 AM and 4 PM, with the name of Future heroes.

There, girls and boys will be able to learn more about the cars and tools of the institution from the hand of Claxon, a brave rhinoceros firefighter.

All these activities are free and with registration, to the mail visita.mubo@cbs.cl

Restored film at the Cineteca Nacional

Until Sunday, June 4, the National Cinematheque will be holding the X International Research Meeting on Chilean and Latin American Cinema, In addition to talks, it will also screen 10 restored Latin American films.

This event, which started on May 23, will coincide with Heritage Day. For this reason, we recommend some of the pieces that you will see free on the platform of this enclosure dedicated to the protection of Chilean cinematography.

Do not miss these Pixote, the law of the weakest, the Brazilian film by Héctor Babenco and with a script by Chilean director Jorge Durán. The film will be shown this Thursday 27 and tells the story of Pixote, a boy who tries to escape from a reformatory, to return to live on the streets of Sao Paulo.

Another must is For another lao, the fiction of José Bohr, which will be given this Friday 28. There you will learn the story of Desideria (played by actress Ana González), a maid who dreams of traveling to Buenos Aires. She manages to fulfill her wish, when a relative of her employers is dying in Argentina and expressly asks them to travel with her. Upon arrival they find out that he will inherit everything to the employee, as long as he marries in less than two weeks.

Finally, on Sunday, June 4, it will be screened The hussar of death, the 1925 film directed by Pedro Sienna. This is the version set to music by the Band of the Colectivo La Patogallina in 2020, and which tells the adventures of the popular guerrilla Manuel Rodríguez between 1814 and his death.