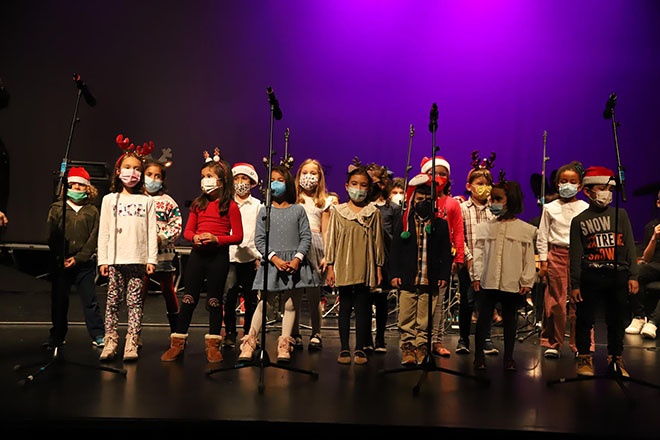 Hundreds of students from the Insular Center for Musical Education of Lanzarote, dependent on the Island Council, performed for another year in the classic Christmas concerts that the training center celebrates every year, which took place on December 20 and 21 in the Víctor Fernández Gopar Theater “El Salinero”.

The educational center, dependent on the Culture area of ​​the Cabildo de Lanzarote, directed by the councilor Alberto Aguiar, estimates that there were approximately 350 people who performed those two days at the Theater in concerts at which, due to capacity restrictions , only family members of the students attended.

In the two days of performances there was everything: from Christmas carols to works by classical composers, passing through popular themes of pop and contemporary rock. Among the surprises, it is worth highlighting the performance of the Rancho de Pascua de Tinajo, special guests of CIEM, who put the touch of Christmas tradition and folklore.

On Monday 20 the performances with the Chamber Music students began with the teacher Maribel Diport, who performed pieces by Chopin, Thais de Massenet or Eriko Akimoto, among others. These were followed by the students of the first CIEM Band, led by Professor Pablo Blanco, who performed songs such as “Vals del Danubio Azul”, by Johan Strauss, or “Christmas a la Big Bang”, with arrangements of Larry Cleck.

The same happened with the students of Advanced Modern Music, who played songs as well known as “Somewhere” or “Rock this Town”, under the direction of Professor Miguel Calzadilla.

Already on Tuesday, December 21, it was the turn of the Beginning Band, who played the popular “Sweet Christmas” and songs by James Pendleton. He was followed on stage by the Brass Band, which was in charge of playing songs by H. Kolasch and I. Gallego. Both groups did so under the direction of Professor Iván Curbelo.

Then it was the turn for the little ones. The students of Music and Movement (5 and 6 years old), under the direction of teacher Laura Hernández, performed “A Christmas Carol I want to sing”, by Regla Santana and Jaime Quesada. They did so accompanied by the CIEM Parranda, which was reinforced by external musicians.

Later, the Initiation students (7 years old) and 1st A (8 years old) did the same with another song by the same authors, Santana and Quesada, entitled “Sing my child”. In this case under the direction of Professor Juana Teresa Medina.

Finally, the two days of concerts closed the students also of Music and Movement and 1st grade, in this case of the teacher Jennifer Rodríguez, and accompanied by the Rancho de Pascua de Tinajo. They said goodbye to the Christmas music meeting with popular themes of traditional Canarian music, among which it is worth mentioning “The boy who is in the cradle”.

The Councilor for Culture of the Cabildo de Lanzarote, Alberto Aguiar, wished to convey his congratulations to all the participants and to the CIEM staff. “They have all made a great effort, students and teachers, to be able to carry out the concerts, and they have also achieved it with a high quality in the interpretations. My sincere congratulations,” said Aguiar.