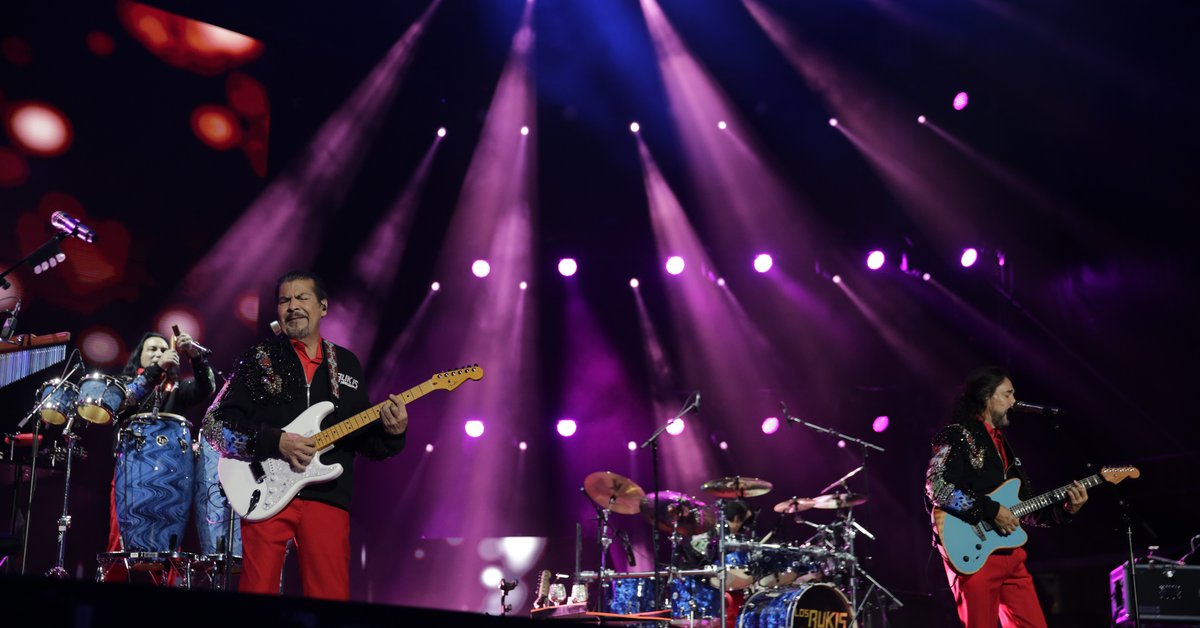 
Los Angeles (USA), Aug 28 (EFE) .- The eternal and endless romanticism of Los Bukis returned this Friday with a triumphant concert in Los Angeles (USA) that ended 25 years of separation from the emblematic Mexican band.
With Marco Antonio Solís at the helm, those from Michoacán filled the huge SoFi Stadium in the Californian city to kick off a reunion tour that will pass in the coming weeks to places like Chicago or Houston (USA).
Several generations of Latinos have grown up with the rapturous cries of broken love, wounded hearts, and torn feelings of Los Bukis.
For this reason, in the seats of the SoFi Stadium, which has capacity for 70,000 spectators at NFL games, there were crowds of children who had brought their parents to the concert as a gift.
“Let’s sing to love,” Solís summed up as soon as he started a recital that began with “My fantasy.”
With red pants and a shiny black jacket, Los Bukis soon released one of those laments of broken love, which are the specialty of the house, with “How I went to fall in love with you.”
But it was another intense and bare-chested ballad, “Quiéreme”, which definitely activated the massive karaoke of an audience that knew the lyrics from beginning to end.
With several screens reinforcing the staging, and that showed curious images of the group in its golden age, Los Bukis opted for a very colorful and bright stage that reminded of those 80s and 90s in which they devastated wherever they set foot.
Despite some problems with the echo – common in stadium concerts – the group boasted a compact and seamless sound.
Much of the blame for this was the bassist Eusebio “Chivo” Cortés, in an enviable state of form and with superb precision at all times.
But it is clear that the key component of Los Bukis is the superb voice of Marco Antonio Solís, who, with an imposing presence on stage, excelled in songs like “My greatest need” or an impressive “I accept my defeat.”
In any case, it wasn’t all tears for shattered relationships or sighs for love that will never be.
Although Eusebio “Chivo” Cortés affectionately referred to his fans as “inveterate romantics”, Los Bukis saved space for dancing and partying, with many touches of cumbia, in “Mi najayita”, “Morenita” and “My poor heart “.
Marco Antonio Solís remembered his daughter Beatriz before dedicating “Pretty Girl” to her and was also very happy to see “the smiles” of his fans again, especially in such turbulent times around the world.
Los Bukis would not have been able to organize a great return tour without the uncompromising loyalty and passion of their fans.
But the band, which has never hidden its spiritual tone, stressed on several occasions that if they were together again it was by divine action.
“This tour is an idea of ​​God. We give it all the credit”, affirmed Marco Antonio Solís, who defended that “there are no impossibles” with the mediation of God.
Nobody would say that Los Bukis began their journey in the distant 1976, since tonight they offered some thirty songs in two hours with hardly any interruptions or pauses to take a breath.
The final stretch began with “I need you” and, with all the public standing and cell phones lit like the old lighters, Los Bukis reached the top with the excellent and unappealable “I need a companion” and “Your prison”.
Of course, audiences weren’t going to let their idols say goodbye so easily.
Thus, Los Bukis returned to the stage for several encores such as “A That One” or “If You See How Much” before saying goodbye hugging and with arms raised, the ideal finishing touch to a dreamed reunion after 25 years of absence.
David Villafranca