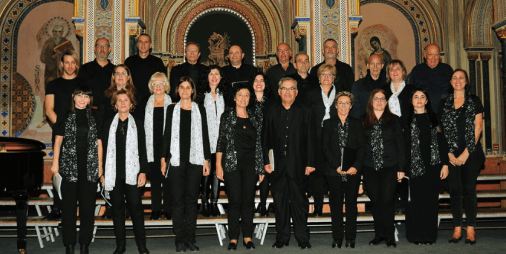 CASTELLO. The Cor Carnevale directed by Jose R. Calpe will perform at the ‘Memorial José Manuel Fandos Ferrada’ concert this Sunday, February 13, at 7:00 p.m., at the Juan Varea Auditorium in Burriana.

On this occasion, in the concert organized by the City Council of Burriana through the Department of Culture, works by Bach, Ray, Giner or the same fans, among others. Admission to the concert will be free until full capacity is reached and the event will be adapted to current health regulations.

The Cor Carnevale was formed in 1997 by several performers who, for the most part, had shared or shared activity in the Borrianenca Choir, to sing at weddings and other celebrations. Little by little, under the direction of the founding director, Oscar Ventura, an activity is carried out in which the gathering between friends and the cultivation of the choral repertoire in its various styles and periods are combined. Currently and since 2003 its director is Jose R. Calpe.

For the Cor Carnevale it is “a pride to participate in the José Manuel Fandos Memorial in 2022” and they have highlighted that several members of the Cor lived together and sang with him at the Orfeón Universitario de Valencia.

The choir regularly participates throughout the year in many celebrations and ceremonies of Burrian society and the city’s parishes. Among others, he has participated in the I Week of Sacred Music in Chilches (2003), in the Proclamation of Holy Week in Borriana (2004, 2012, 2013, 2014 and 2016), in the Africa Day choral festivals in the neighborhood of Nazaret in Valencia (2005, 2006 and 2014), at the San Marcel lí Spring Choral Festival in Valencia (2006), at the Cudillero Habaneras Festival (Asturias) in 2008, at the Finestrat Marinera Song Festival (2015), at the Sueca Choral Festival (2016), and at the Festival des Trois Vallées, in Provence (France) in April 2017.

In addition, he has performed concerts in Vitoria (2012) invited by the Udaberria Choir and in different towns in the Plana region and the Valencian Community, as well as the traditional concerts in Burriana de Nadal and in summer, this one in the hermitage of the Virgin of Mercy in the area of ​​Clot de la Mare de Déu.

In 2007, along with four other choirs, the Borrianenca Children’s and Youth Choir and the Borrianenca Filharmònica Band, he performed Carmina Burana by Carl Orff, who performed again with the Orquesta Música Viva in Nules in 2016.

Along with the Youth Orchestra of the Agrupació Filharmònica Borrianenca, he has performed the Magnificat Pergolesi (2005), choral parts of the Christmas oratory of Sain-Säens and The Messiah Häendel (2014) and the Glory from Vivaldi (2016). In 2013, in collaboration with the Sant Bertomeu de Nules Choir, she performed the Requiem by Gabriel Faure. In 2017 she performed for the first time Gospel Mass by Robert Ray, which was a great success with the public. In 2018 she performed it again at the Auditorium and Palau de Congresos de Castelló with the Municipal Band of Castelló