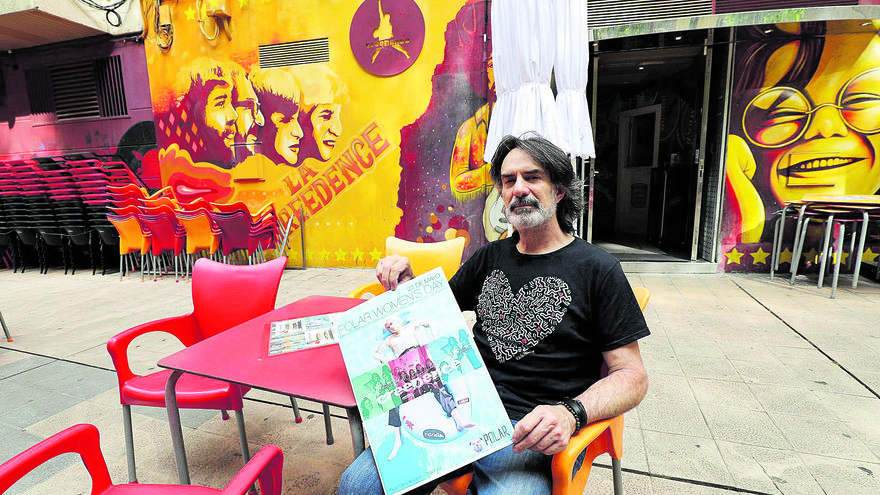 The manager and programmer of the Creedence hall in Zaragoza, Mike Ramón, this Friday with the poster of the musical event organized for this Saturday.
ANGEL DE CASTRO

Live music begins to sound again little by little in the rooms of Zaragoza after more than a year of almost absolute silence. The new sanitary conditions published on May 7 allow these venues to reprogram, although without selling drinks or food during the performance. A “poisoned gift” and a restriction that for all practical purposes makes it impossible for concerts to be profitable. Despite this complicated panorama, some rooms in Zaragoza have re-programmed, even if it is to start up the machinery again and employ technicians and musicians. The Creedence resumed the concerts this Saturday and the Rock & Blues and the Moliner7 room did so last week driven by enthusiasm and their passion for music.

“We return for the love of art because with the current regulations we are very clear that all bowling is going to lose out”, indicates the manager and programmer of the Creedence, Mike Ramón, whose room hosts this Saturday the concerts of Erin Memento and Las Wonder. «In May of last year we did three performances, but since then we have been blank. Going back is also important because it allows us to see a light at the end of the tunnel and generate work for musicians and technicians ”, explains Ramón, who recalls that his room was converted into a music school during the pandemic.

Few more exits had. Now, the new regulations have opened the tap a bit more, but it is still “insufficient”, as stressed from the sector. With a capacity of 50%, the assigned seats, the safety distance and the prohibition of serving drinks, the viability of the concerts is almost an impossible mission.

“My usual capacity is 250 people, but now I can only put 50 in performances because I have to meet the distances,” laments Pablo Cano ‘Patxi’, owner of Rock & Blues and president of Aragón en Vivo, an association that brings together 19 music venues, 95% of which there are in Aragon. The return of the concerts is also making visible «The absurdity» of the new regulation. “We don’t understand why you can drink while sitting in a bar and you can’t if you listen to live music in the meantime,” says Cano, who for the month of June has scheduled several concerts that he already knows will make him lose. money.

«We all know that a concert in a hall is in itself deficient. What fixes it is the collection of the bar “, recognizes Chema Fernández, the programmer of La Casa del Loco.

It is these “killer” restrictions, Cano says, that prevent more theaters from daring to reschedule, although others are considering it. The lightbulb can, for example, will host a concert on June 5 and other nightlife businesses are willing to open just for concerts.

The return of live music will encourage one of the sectors that is suffering the most from the effects of the pandemic. According to Aragón en Vivo, since the arrival of the virus more than 2,500 concerts have been canceled in the community with losses of four million euros (the rooms have lamented the lack of aid). And all this has caused a cascade effect. “I know sound technicians who are delivering pizzas,” laments Ramón.

This Saturday at Creedence

The Creedence hall takes up the concerts this Saturday with a very special event: the first ‘Polar Weekend Women’s Day’, which will feature only women. The day opens at 12.00 with a sonorous vermouth by The Sisters-in-law: GaragErika and Anita Shaker. In the afternoon the main course will arrive with the concerts of Erin Memento (5:00 p.m.) and Las Wonder (7:00 p.m.). For his part, Rock & blues has already organized a month of June very musical with the concerts of Tomasito & Pepe Bao, Pardos Bross, O’Funkillo, Julián Maeso and the Zaragoza band Malaventura. The rooms assume that “all will be in deficit.”