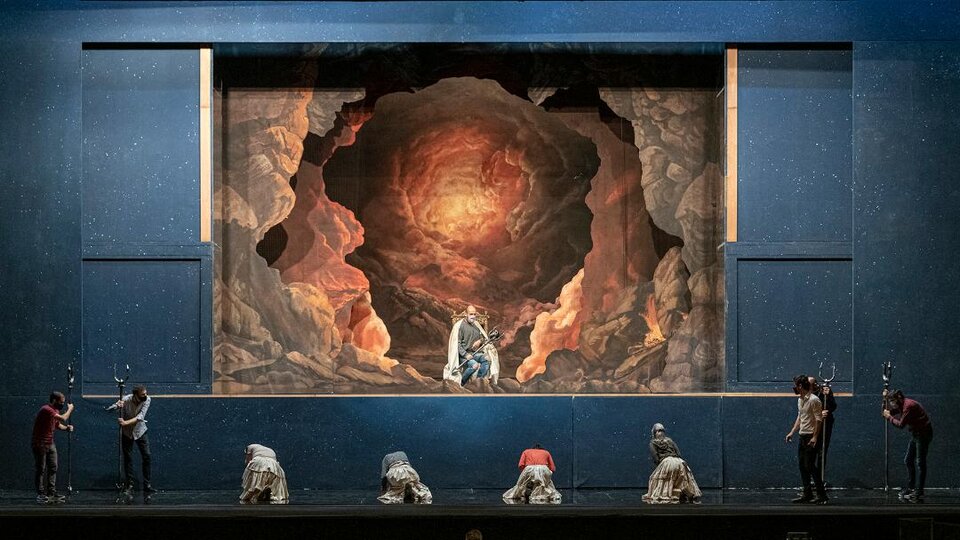 Sailing by sight, and in accordance with current health regulations, the Colón Theater reprogrammed its calendar and announced a series of face-to-face functions for the month of July. After the pause forced by the worsening of the pandemic, after the lavish celebrations for the centenary of Astor Piazzolla’s birth in March, the largest Argentine theater – which this Tuesday cleaned and maintained its historic central spider – reorganized its activities for the short term, with presentations by the Philharmonic Orchestra, the Stable Orchestra, the Stable Ballet and the start of the lyrical season with More songs, a miscellany of pages in representative style of Claudio Monteverdi.

Announced at the time for April, More songs will finally be staged on Thursday 8, Saturday 10 and Tuesday 13 at 20, and Sunday 11 at 17, with the stage direction of Pablo Maritano and the musical direction of Marcelo Birman. The music of the Italian composer, one of the emblematic names of music in the passage from Renaissance to Baroque, will have at its disposal a large and all Argentine cast, in which some of the most notable voices of today stand out, such as countertenor Martín Oro, sopranos Oriana Favaro, Constanza Díaz Falú, Daniela Tabernig and Adriana Mastrángelo; the tenors Pablo Urban and Santiago Martínez; the baritones Víctor Torres and Alejandro Spies and the basses Hernán Iturralde and the Venezuelan who was a member of these coasts, Iván García. The scenography is by Nicolás Boni, the costume design by Renata Schussheim and the lighting design by José Luis Fioruccio.

The Buenos Aires Philharmonic Orchestra season will begin this Friday at 8 p.m., under the direction of its owner Enrique Arturo Diemecke, with the participation of the mezzo-soprano Guadalupe Barrientos and the tenor Gustavo López Manzitti as soloists. The program will include The song of the earth, from Gustav Mahler, in the version for chamber orchestra of Arnold Shoenberg. Mahler composed this cycle of songs embedded in a powerful symphonic context between 1907 and 1909, based on poems by Li Tai-Po, the wandering bard of the Tang Dynasty, among other translations were part of the anthology Chin flutea by Hans Bethge. In 1921 Schoenberg began the task of reducing Mahler’s large score to present it to the Society for Private Musical Performances in Vienna, which he himself had founded, but soon after the society ceased to function, so he abandoned the idea when he had finished. only a part of the first movement for string quintet and wind quintet, in addition to three percussionists, piano, celesta and harmonium. The project was only completed in 1980 by composer Rainer Riehn.

Also with the reduced organic, the second concert of this season of the Philharmonic Orchestra will take place on Friday 30, with Ezequiel Silberstein as guest conductor. The program foresees the interpretation of the Concerto for piano, trumpet and strings No. 1 Op. 35 from Dimitri Shostakovich, with Iván Rutkauskas (piano) and Fernando Ciancio (trumpet) as soloists. The Stable Orchestra will perform on Sunday 4 at 5 pm under the baton of Marcelo Ayub. Concerto No. 3 in G major by Luigi Boccherini, with Stanimir Todorov as soloist, and Stabat Mater by Giovanni Battista Pergolesi, with soprano Jaquelina Livieri, mezzo-soprano Florencia Machado and Felipe Delsat on organ, dominates the program. On Thursday 15 at 20, the Stable will offer works of Beethoven y Schubert, with the direction of Fredy Varela Montero and the performance of the soprano Carla Filipcic Holmes.

On Friday 23rd, Saturday 24th and Tuesday 27th at 20:00, and Sunday 25th at 17:00, the Stable Ballet, directed by Paloma Herrera, will start its season with a mixed program. The premiere of Piazzolla itinerary, the creation of the choreographer Alejandro cervera who walks through the monuments and labyrinths of the great bandoneonist and composer on the centenary of his birth, shares the program with Gale, a choreography by Maximiliano Iglesias based on music by Piotr Illic Tchaikovski, with the participation of Marcelo Balat on piano.

Tickets are on sale and can only be purchased online through the page www.teatrocolon.org.ar.