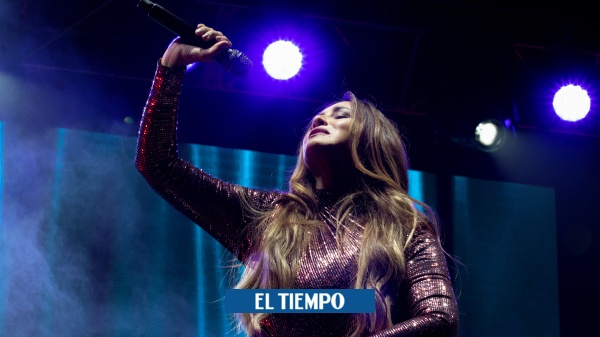 The link that exists between the song The man I love and its interpreter, the Chilean Myriam Hernandez, is indissoluble. Little more than 30 years have passed since he conquered the continent with his powerful voice and lyrics that distilled romance to the core. With that theme he got among the ten most popular of Billboard of the 90s and opened the doors so that his following productions –He left me, A secret man, You are, If it wasn’t you, It smells of danger, You look so much like him, Wounded, I’ve come back for you– were also exit.

It took ten years for Myriam to produce an album of unreleased songs, during which time she dedicated herself to touring and performing in theaters. “It’s just that I didn’t fall in love with any song, I swear, it was tremendous because he told me: ‘I can’t let more time go by without having a new song.’ I was already very upset. Until I met Jacobo Calderón”.

(What’s more: ‘Charm’ does not seduce the Chinese and barely goes for US 3 million at the box office).

Calderón is the son of Juan Carlos Calderón, a dynasty of Spanish composers that has hits by Nino Bravo in tow, Luis Miguel, Alejandra Guzmán, Manuel Mijares or Alejandra Guzmán.

“Jacobo is a tremendous producer. He sent me some songs and we wrote others together, I fell in love with this album. That’s why I decided to record it,” says Hernández in a conversation via Zoom with EL TIEMPO.

Sinergia is the title of the Chilean’s tenth album and marks her return with new compositions: Up to here, It’s late, and I love you, I love you, among others. The most recent release was Dunas, a collaboration with fellow Chilean and queen of Latin American electropop, Javiera Mena.

“The album has a very romantic energy, it talks not only about love as a couple, but also about self-love. There are fun songs, other deeper ones that talk about that feeling that transcends; we touch on all kinds of love with which many will feel identified, because that is what I have liked to do, stories that are easy to digest and appropriate. And as for the sound, it’s very fresh, up-to-date, but it’s still very romantic, with strings that accompany the songs”, says the balladeer.

After passing through a dozen cities in the United States, in addition to Puerto Rico and the Dominican Republic, Sinergia Tour will arrive in Colombia with two concerts, on April 29 and 30, in Bogotá (Movistar Arena) and Medellín (La Macarena), together with the Argentine duo Pimpinela. Myriam Hernández will include songs from her new album and her great classics in her repertoire.

“I always manage to re-enchant myself with those hits that have been around for a long time, because it is inevitable not to sing them in a show, that’s why I try to give them something different. The arrangements for the Sinergia tour were made by Jacobo Calderón and they are very varied, he imprinted new sounds and elements on each song, but the essence is maintained, although there are surprises about how you present those classics on stage so that they are different, that they have new structure, that they sound different”.

The voice of Myriam Raquel Hernández Navarro, 56, is intact; every day she takes vitamins to avoid colds and does vocal exercises and rest to take care of her. “I also have an obsession with my skin, I take great care of it. I have good genetics, but I do my treatments, I exercise, I eat healthy, I drink a lot of water… what you have to do to be well”, says the artist, who has been married for 28 years and has two children.

“Feeling the audience live again is priceless and difficult to describe. It’s an intense emotion”, he assures while confirming new dates for his tour in Panama, Ecuador, Peru, Bolivia, Argentina, Costa Rica and more cities in the United States.

For more information on ticket prices for concerts in Colombia, see www.movistararena.co and www.latiquetera.com

‘The forgiveness’, a catharsis by Juana Acosta

The triumphant return of Carmen Maura to the theater in France

The Chilean Myriam Hernández returns, the voice of ‘The man I love’