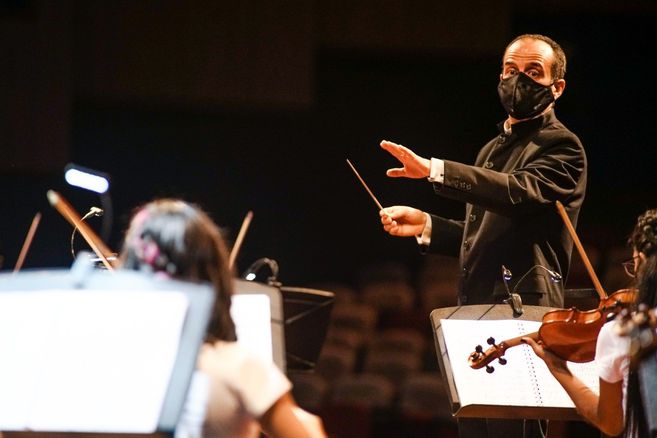 On Monday, October 18 (5:00 pm), the Adolfo Mejía Theater opens its doors to the OSC, which under the direction of Leonardo Marulanda will close its orchestral work during the 2021 period.

In October 2016, the Cartagena Symphony Orchestra -OSC- was born as a project of the Salvi Foundation. Daughter of the Cartagena Music Festival and what was then called the “Orchestral Project”, the OSC sought to be an initiative that would allow a continuous process to young symphonic instrumentalists so that during the year they would complement their musical education through an immersive experience artistic and formative.

(You may be interested: National Festival of Bullerengue in Necoclí returns to the presence)

With the support of the Ministry of Culture and other entities, the OSC in October celebrates its fifth anniversary with a free agenda that includes concerts in the neighborhoods of Cartagena, open rehearsals, classes and a great concert at the Adolfo Mejía Theater on October 18. .

Orchestra to the neighborhood

To start the celebration, on Saturday, October 2, members of the OSC appeared at the Cristo Rey de Crespo Church in a free concert for the community.

The protagonists were seven ensembles made up of the members of the orchestra who presented a wide repertoire and, even, in which some of the Orchestra’s workshop leaders participated.

“My Cartagena”, a concert to close the artistic activities of 2021

On holiday Monday, October 18 at 5:00 pm, the concert will take place at the Adolfo Mejía Theater (Cartagena). My Cartagena, an event that closes the work of the orchestra for the period 2021.

(We recommend: Rosendo Romero Ospino: the narrative voices of a poet)

Under the direction of maestro Leonardo Marulanda, chief conductor of the OSC for this period, the concert will present chamber and orchestral works by Colombian and international composers.

The repertoire will be made up of works by the Yugoslav percussionist Nebojsa Zivkovick, the American composer Aaron Copland, the Englishman Gustav Hols, the Norwegian Edvard Grieg, the Russian Pyotr Ilich Tchaikovski and the Argentine Terig Tucci.

(Also read: Molotov is working on a new album, will it be just as controversial?)

As a Colombian fee, the concert will present the joint Maria Barilla in arrangement by Victoriano Valencia and a piece by Colombian clarinetist Guillermo Marín (who is also a workshop teacher in the wood section of the orchestra).

Free entry until capacity is exhausted.

As is tradition, the OSC opens the doors of one of its rehearsals to the community, which will take place on holiday Monday, October 18 from 11:00 am

This open rehearsal, also at the Adolfo Mejía Theater, will function as a didactic concert in which attendees will be able to learn about the sections of the orchestra and part of the universal repertoire under the explanatory guide of maestro Leonardo Marulanda.

Free entry until capacity is exhausted.

Until October 23, 2021, the call will be open to select the young people who will make up the Cartagena Symphony Orchestra (OSC) in its preparation and presentations within the framework of the Cartagena XVI Music Festival that will take place in the month January 2022.

For this, the instrumentalist musicians residing in the urban area of ​​Cartagena de Indias will be able to present their candidacies to be part of the OSC.