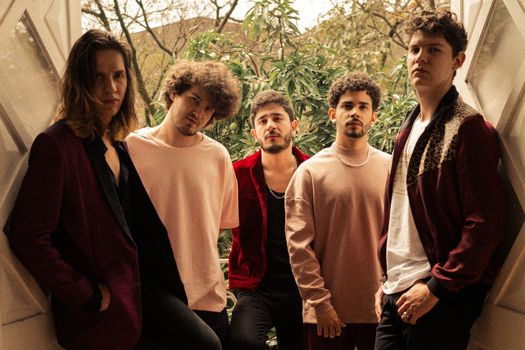 There are four instruments and four members: the brothers Daniel and Jerónimo Betancur, Miguel Spitaletta and Otto Díaz.

It is part of “Memories”. It arises from the daily stories of its members. They are narrated under the existential nuance produced by the distant voice in the plain through which prowling bison. And complemented by the sound of the synthesizers that represents the land of that plain, with the drums that mark the walk of the beast and the bass that indicates its snorting. It is the first album of “La Banda del Bisonte”.

“The construction of the name was spontaneous. Later we created the symbolism, we related the music to the animal, but in the end, what identifies us is the music we make”, they say. Jerome and Michael.

Not all the time it had that name. Before it was called “Jack”. A friend from England told them that there was a group there called that. At events they introduced themselves as “we are Jack, the bison gang.” They decided to take away the “Jack” and keep the rest. That rest is today’s name, an LP of 10 songs, an EP of 5 and 9 singles.

The second long-term production was the EP “Escondite de los que nada nada”. A production directed by Danton Supple, one of the producers of the British band Coldplay. They met him at the Selina International Music Summit that took place in 2018 in Medellín. He liked how they sounded and invited them to do that production

“That’s when we said we wanted to make a living from music. Each one had their job and was dedicated to other things, but after that we wanted to dedicate ourselves totally to the band and create a work team with everything so that the group would be taken seriously”, says Jerónimo.

In 2019 they released that EP and a week later the pandemic arrived. It helped them to continue making music and perform at the 2020 edition of the Altavoz Festival, which was without an audience and via streaming. They were selected and the same festival linked them with the Vive Latino Festival in Mexico for 2022, That was his second stop.

“We have gone to Bogotá and other places to play without money, but we have to leave because otherwise we will stay local. But we have already found a manager, sound engineer and friends who they have been getting involved with the audiovisual theme and others. For this to work we have to believe that we are a big band, to go further”.

At that rate they arrived in Mexico City, a true metropolis. They arrived on a Tuesday and were surprised by the large musical movement there was. They rubbed shoulders in the dressing rooms with Julieta Venegas, Los Auténticos Decadentes and other artists. Their presentation arrived and they felt that reciprocity with the public again. The pandemic had taken it away.

They returned to Colombia with the desire to remove the thorn left by the confinement. The one to sing without an audience. They wanted to see the people of their city in the international edition of festival speaker They presented themselves again and this time they qualified first. They will get up on that stage and make the antechamber to Mon Laferte.

The good news does not stop. They appeared in the line up of the most important alternative music festival in Colombia. It was one of his big goals. They didn’t know when, but they already know. 2023. “In interviews they asked us where we wanted to be and we said that at the Estéreo Picnic”, asserts Jerónimo.

“We don’t really know how that happened. They wrote to our manager. I believe that this is also due to the movement of going to other cities, of playing in Bogotá and build an audience. It is the product of the work we have done,” says Miguel.

The Bison Band: Touring the Plains of Indie Rock