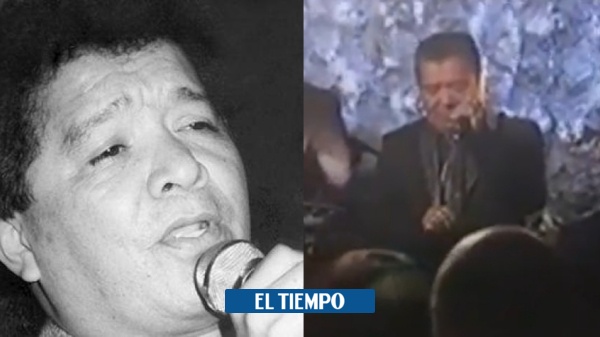 When the Colombian-Venezuelan Pastor Lopez launched his theme ‘The absent son’ he never thought that one day the composition was going to torment him.

From the moment he conceived the lyrics, he was sure it was clear that, at a certain moment, he could be portraying the ‘hazards’ of his busy profession as a singer.

Especially that habit not to have “Birthdays, neither father’s or mother’s day, or a December 31st at home with the family”, as he described her in a talk with BOCAS magazine, in 2013.

However, at the end of the year, in full concert in La Palma de Mallorca, Spain, the shouts of the people clamoring for ‘The absent son’ represented a real cold water flushing.

“I said no inside, don’t make me sing that”, recalled 6 years before dying due to cerebral ischemia.

Why didn’t the artist want to sing one of his biggest hits?

(We recommend: The story behind the sad song ‘Missing five to twelve’).

The family attachment of the ‘Indian’ Pastor López

Pastor López was born on June 15, 1944 in Barquisimeto, Venezuela.

One of the supports of the 40 years of musical activity that José Pastor Pineda López, better known as Pastor López, accumulated was his family support.

When Pastor was a child, his father, an “Indian” who, according to what he said in the aforementioned interview, “did not want” to give him his last name, deepened his musical vein by taking him to small popular music concerts every Sunday.

Also, the fact that her mother worked as instrument maker he predicted that melodies would be his ‘daily bread’.

Thus, since he was seven years old, he began to make music. And it practically didn’t stop until he passed away.

Precisely, in his prime, one of his purposes was to buy a house for his mother in the Venezuelan city of Maracaibo.

Later, driven by the desire to be by her side, he moved to the capital of the state of Zulia.

His bond with his mother was so close that perhaps one of the most difficult presentations of his life was given to be thousands of miles from her.

(What’s more: Breaking the dishes and the strangest rituals for the end of the year).

When the singer became ‘The absent son’

“Another year that passes and I am so far away / another Christmas without seeing my people / mother I humbly ask you / that in the new year you remember me / that at the table you put a place / for the son who will not arrive / Yes, although I’m not here to toast / My pompadour is always overflowing “Pastor López had to sing hundreds of times amid the excitement of his fans without being consumed by the chorus.

But on December 24, during a concert on the island of Mallorca, his family context literally led him to cry with your audience.

López was distinguished from a very young age as ‘The king of the party’.

Everything would have happened on a Christmas in the second half of the 20th century, when people were not a WhatsApp message away.

Pastor López was on a platform while Mrs. Zoila López, his mother, was fighting for her life in a Venezuelan hospital ward.

The sadness of being away from his mother on such a special date and in such a harsh context was aggravated when the audience of his concert cried out for him to sing ‘The absent son’.

Minutes later, perhaps still with a lump in his throat, he left the stage and left.

The ‘show’ was over.

(Be sure to read: So you can see the conjunction of the Moon and Mars this December 31).

The challenge of singing in the midst of pain

Although that was one of López’s most difficult performances, it was not the only one in which ‘his heart cried’ by singing your own melodies.

On other occasions, as he told BOCAS, he had to keep his presentations afloat despite “Sadness and bitterness”.

When his father passed away, he had only one week to do a concert.

The same thing happened when his mother died: five days after saying goodbye to Doña Zoila, he appeared on stage.

And last but not least: after the death of one of his sisters, he had just 24 hours to ‘calm the soul’ because a concert was waiting for him.

That work rhythm, in his words, was “Very messy”.

Still, his commitment to his craft led him to do everything possible not to cancel a concert.

That which some would classify as ‘professionalism’ and which others would call ‘the harsh ingratitude of music’.

(Keep reading: The 7 magnificent of the New Year’s Eve party in our country).

And what better time to remember this ‘absent son’ than a few hours after the close of 2021.

Pastor López left this world on April 5, 2019. This will, then, be the second New Year in which the immortal singer-songwriter will be physically away from his audience.

Because musically it will be present in millions of Colombian homes.

Pandemic and sports: the topics in the networks and Google

Android 12: list of cell phones that will be updated in 2022

Stacks! Know the value of the technical review for the coming year

The trends that the tourism sector will take during 2022

Dubai: how to live in the city of billionaires? Some advices