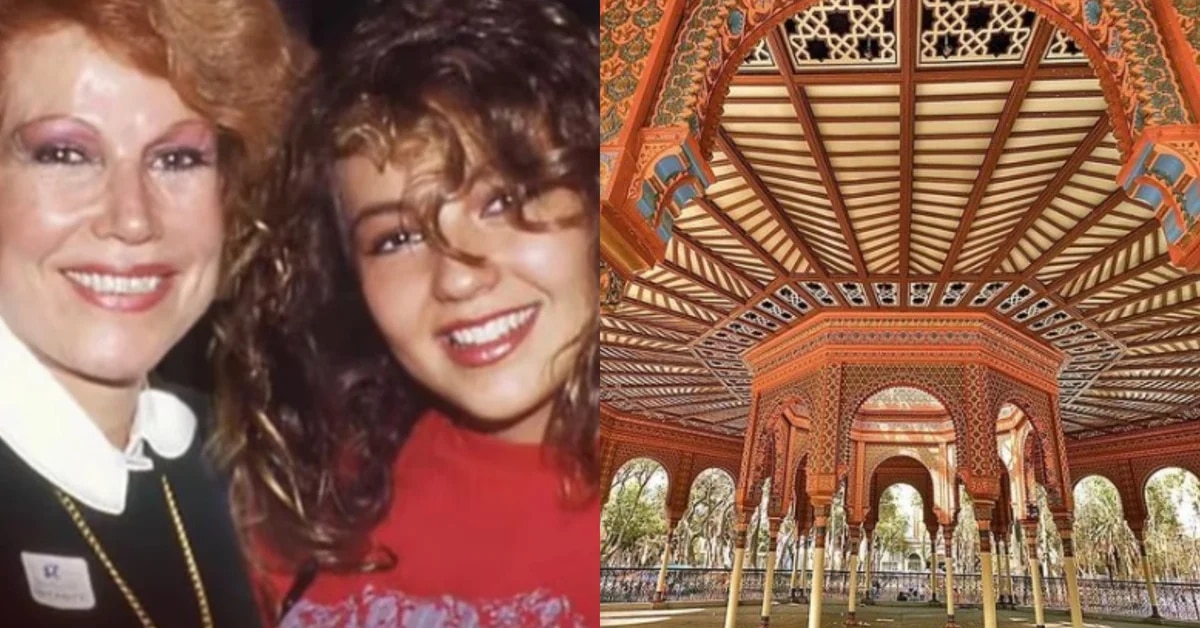 At the beginning of the year, Thalía used his social networks to remember the place of Mexico City in which he grew up. Proud of her origins and in full promotion of her latest single, the singer wrote on her Instagram profile that the colony Santa María la Ribera served as inspiration to compose one of the songs from his most recent album Desamorfosis.

The Mexican actress and singer recalled her childhood and through a composition of photographs where she appears with her mother as a girl and then a teenager, Thalía highlighted how proud she feels to have grown up in that historic colony which was the inspiration for his song titled Neighborhood.

The Morisco Kiosk was built at the end of the 19th century.

With several images of the Kiosco Morisco, one of the most important buildings in the neighborhood located in the center of the capital city, in the Cuauhtémoc mayor’s office, and a series of unpublished family photos, Thalia he remembered his childhood:

“This Moorish kiosk was in the Alameda in my neighborhood, where every weekend I would ride my bike, have a picnic on the grass and eat popsicles vanilla and raisins in the corner. They are such vivid and wonderful memories of my childhood in my wonderful neighborhood, Santa María La Ribera! ”Wrote the wife of businessman Tommy Mottola.

The Kiosco Morisco was installed in the Alameda Central, at the beginning of the last century.

The singer of A pact between the two explained that thanks to the fact that he grew up in the colony of architectural and historical value, considered the first modern subdivision of the city, he was able to he managed to write the song where he speaks the colors, sounds and sensations of his native neighborhood.

The actress also shared photographs of the façade of what was her home in her early years, an old mansion known locally as “The House of Dogs” located on the street of Salvador Díaz Mirón. of the colony that represents one of the first planned subdivisions in Mexico City in the year 1821.

Thalía motivated us to feel pride in the origin of each one, that is why she invited her fans to share photos of their neighborhood using the hashtag #BarrioT with the promise of sharing in their stories the photos that you liked the most.

Thalía showed unpublished family photos like this one, where she is seen in a cart at a fair in the neighborhood Photo: Instagram @ thalia

Thalía defined her new musical proposal as a return to the origin and its first essence: “For memories like this … that’s how I composed this song #Barrio. A very powerful letter of great pride in recognizing where we come from, who we are today, and obviously thinking about what remains to be done. This song is my neighborhood, but I would love for you to show me your neighborhood”He added.

Since the year 2000, Thalía resides permanently outside the country, because since she married the wealthy businessman of Italian-American origin, Tommy Mottola, the singer of I don’t remember went to live with him in the United States.

“In my neighborhood I was growing

With street color I was polishing

Those sounds that are in my chest

I wear them fresh as January flowers “says the song of the 50-year-old interpreter.

‘The house of the dogs’ is located on Salvador Díaz Mirón street number 153 Photo: Instagram @ thalia

Recently Thalía also shared memories, but it was in reference to the celebration of the 25 years of his soap opera Marimar. To commemorate what is considered the most widely exported melodrama to multiple countries, Thalía virtually met with Eduardo Capetillo, her co-star in the 1994 production.

He shared images of the facade of the old house that today changed owners and is inhabited by an order of Catholic nuns Photo: Instagram @ thalia

The actors who gave life to “Sergio Santibáñez” and “Marimar”, talked about different anecdotes of the telenovela produced by Verónica Pimstein, as well as their careers before and after the successful telenovela: “Thank God and the universe that I had the opportunity to be part of a project like this … That is priceless and it is incredible that even after so many years and people continue to give us so much love ”, explained Capetillo.

Eduardo Capetillo Jr. explained the reason why he was seen with a weapon
Thalía shared details about the treatment for her back injury
“Thalía del 2000 is back”: the singer announced the relaunch of her iconic music videos

Thalía, the one from the neighborhood: the singer remembered her childhood in Santa María la Ribera