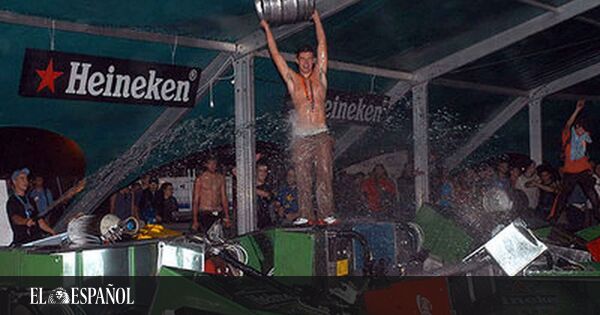 They wanted to recover the spirit hippie But they found a completely different generation. It was the end of the 90s, the Generation X I was so disconnected from the farm of Bethel like the music of his parents. Who made it to the Rome military base (New York) they were looking to vent all their frustrations for a weekend. With the best possible soundtrack for it.

The Music Box documentary, Woodstock 99, collects the experience of artists, assistants and promoters in which he became the most chaotic festival of the decade 90’s. Rapes, destroyed scenes, injuries and subhuman conditions, a cocktail that forever stained the Woodstock name as a synonym for peace and coexistence.


Madrid also experienced its particular Woodstock between July 16 and 18, 2005. Móstoles hosted the largest edition of a festival that became, together with the FIB, the longest running in Spain. Up to 14 editions were held in the capital, with a poster loaded with famous bands from the turn of the century: Marilyn Manson, The Prodigy, Nightwish O System of a Down among others.

It is impossible to establish similarities Between the two events, Woodstock 99 reached half a million people, while Festimad welcomed 40,000 in each of its three days. Modest figures compared to their US counterpart, although very significant considering how limited this type of event was in our country.

Nevertheless, the mistakes that served as a prelude to chaos are repeated between the two: excessive heat, poorly conditioned rooms, miscalculations and a generation influenced by testosterone and the violence of the end of the millennium.

The arrival of Popular Party a Mostoles caused the closure of El Soto Park, the location chosen in previous editions by the organizers. In a few months they had to find a replacement that offered the same security and capacity guarantees. The only alternative was the Cerro de la Cantueña, a nature reserve between Fuenlabrada and Speak out.

The grass and shade in the camping area promised to the attendees, turned to cement and dust. The trees that had to cover the enclosure did not reach two meters, not enough to escape the July heat. However, the festival went on. It was facing its largest edition to date and the expectation was maximum.

Woodstok 99 also decided to change its location from the previous year. The success of its 1994 edition was only clouded by mud and large tails. The solution was easy: move the festival to a much larger place, better conditioned and with greater security guarantees. Paradoxically, the festival “of peace and love” ended up being celebrated in a abandoned military airbase. To a summer with record temperatures, we had to add the lack of shade and water, as well as the two kilometers that separated both main stages.

The Madrid festival goers complained about the same thing. Some enraged the television cameras, which were approaching the campsite, about the lack of communication from the organizers, the absence of water in the stalls of drink or the dust that covered the entire room. Although we would have to wait until the last day for things to take a more tragic turn.

Both festivals failed in the forecast and in a fundamental element: overestimating attendee patience. At the end of the two events, fatigue, long lines, lack of basic services and dehydration began to seriously affect the public. While at Woodstock 99 the magnitude of the event and the lack of security personnel gave the whole issue ‘the finishing touch’, in Fuenlabrada it was the technical problems of one of the scenarios. 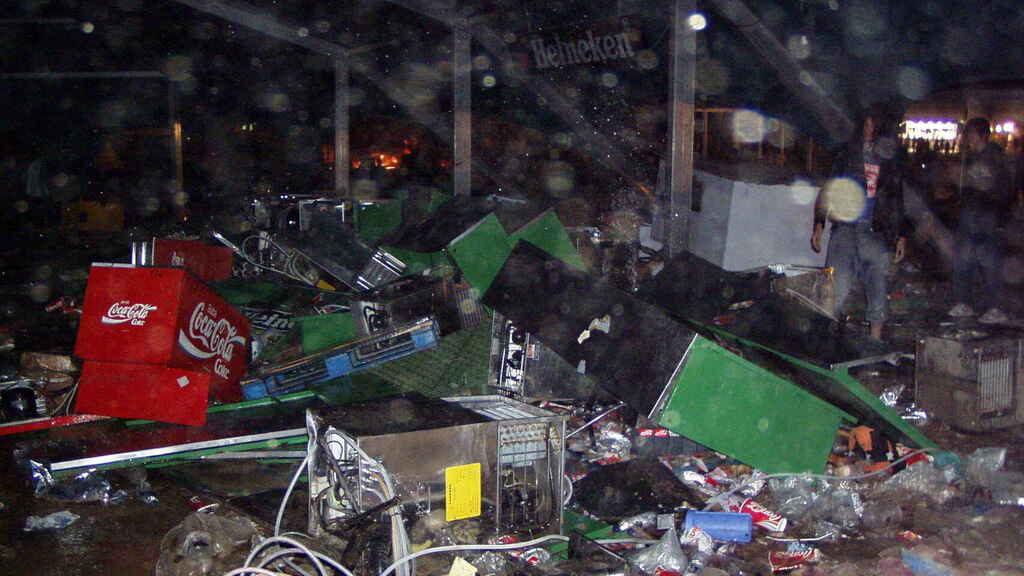 One of the shattered bars in Festimad 05.

At ten o’clock at night the music was turned off in the Heineken stage. Four hours later the attendees in the most absolute silence watched as it was disassembled piece by piece, without the organizers addressing the respectable or offering the return of their tickets. A gust of wind threatened to blow the entire structure, so the rest of the concerts had to be relocated to the other stage.

The general discontent turned more and more into a collective anger that began with rob the booths. The waiters fled the place while the assistants smashed the bars. A nearby stands became the target of hundreds of people who began to throw rocks and bottles toward the seats, again causing another mass flight. Bored and angry, they continued destroying everything in their path until the music began again.

Already from Prometheus, the promise of fire has a very attractive component among human beings. Fire is capable of illuminating all kinds of mental states, but there is an intrinsic relationship throughout history between mobs of people and the fiery element that is almost inseparable.

Toyota took the opportunity to present his new car model: the Aygo. Several vehicles had been transferred to Fuenlabrada and exhibited throughout the festival. Although there were several attempts to burn them and overturn them, everything remained there, in attempts, until after two in the morning the Promethean miracle took place.

The poetics of the matter would remain in that kind of urban legend that surrounds the festival that says that the vehicles caught fire just at the moment in which Firestarter from The Prodigy It sounded, the last band to perform at Festimad 2005. Something very similar to what happened with Fire from Jimi Hendrix, versioned by The Red Hot Chili Peppers at Woodstock 99. As the music played, large bonfires were raised among the audience, halfway between the macabre joke and mere provocation.

As the cars burned in Fuenlabrada, several of the attendees burned other tents, forcing the fire brigade intervention, who appeared in the concert area at dawn to extinguish the flames of what two days earlier had been a drinks stand.

In New York it was the police, baton at the ready, who had to appear with thousands of troops to control the mob that tried to set fire to the main stage and the sound towers.

The next morning as the campers collected their belongings, the setting was Dante in Fuenlabrada. Trash and tents torn from their bases gave an image closer to that of a typhoon than a music festival. The brands that had sponsored the festival now seemed to be part of a stage of Mad Max, an ode to late capitalism.

Both festivals ended up bursting at the seams of one unaffordable magnitude. Woodstock was damaged as a brand forever. The organizers announced a new edition for 2019 that intended to regain its good name, however, it was canceled months before its first day. Festimad did not overcome its 2005 edition either. In the following years they would decrease in public and stages, while other festivals occupied the space left, disappearing in 2020. 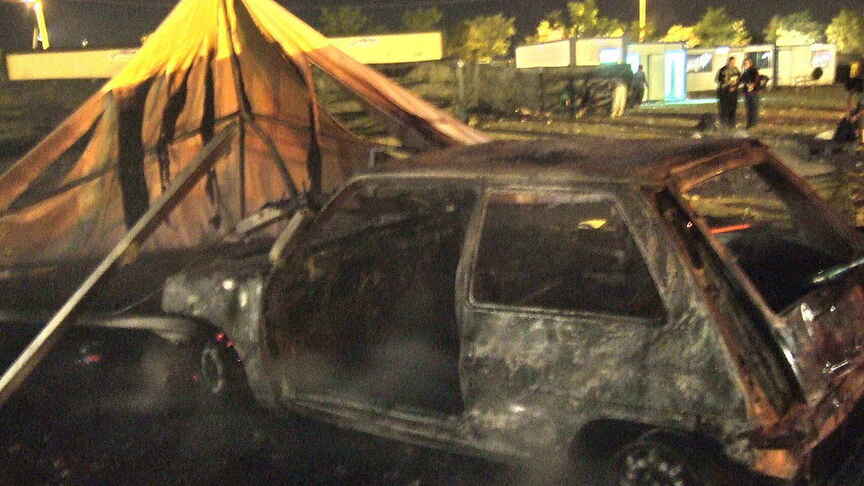 One of the promotional cars burned during the festival.