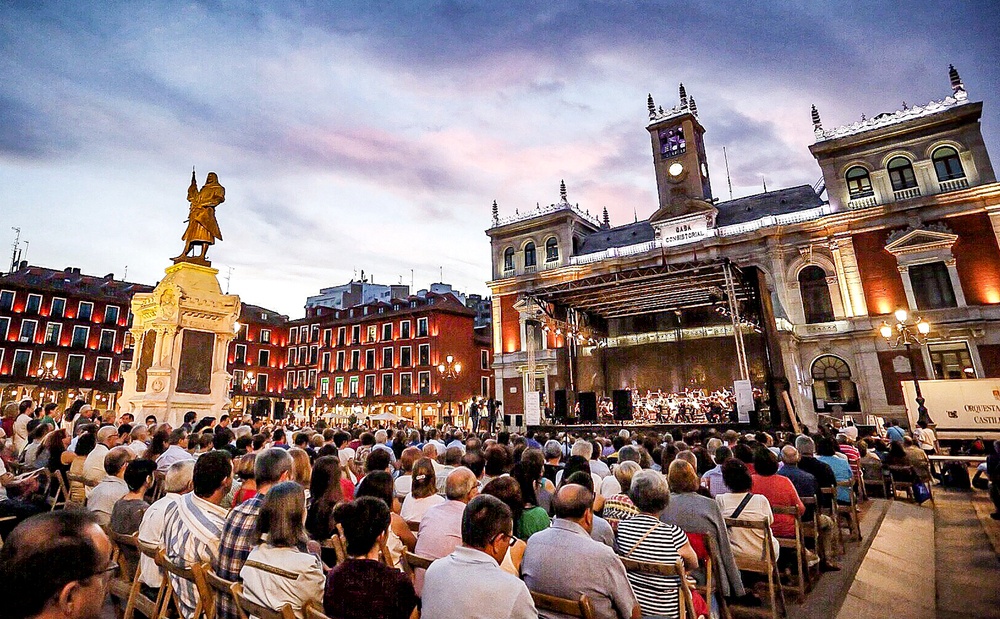 There will be parties. “The best possible parties,” as the mayor, Óscar Puente, pointed out this week. They will start next Friday, September 3, with a proclamation included, and will end ten days later, on the 12th. They will not be the same as before the pandemic, but the City Council has looked for a program (up to four say they have managed according to the health situation in force in Valladolid) that gives a push “to sectors as punished as the hospitality industry and culture”, in addition to “giving citizens a respite and a chance to get out of the oppressive environment of this year and a half as a consequence of the virus. Thus, the Plaza Mayor will be shielded, which will once again be the nerve center of the Fair and Festivities of the Virgen de San Lorenzo and which will host ten concerts, one per day from 3 to 12, in addition to the proclamation by representatives of the services Municipal Fire Department, Municipal Police, Cleaning Service and Social Services, also limited to a thousand people and which will be broadcast live by La 8.

On the stage, which will be placed on this occasion in front of the City Hall façade, will pass Amparanoia, The Mondragón Orchestra, Isaac and Nora + Fetén Fetén, Jeanette (the only one that remains from the original program), Carlos Núñez, Mala Rodríguez, De Pedro , Dead Bullfighters, Fuel Fandango and Juan Perro. In all cases with a capacity limited to a thousand people, seated and wearing a mask. Tickets will be free and can be purchased in person at Casa Revilla and online through www.mgticket.com/fiestasvalladolid. A maximum of two tickets per concert will be allowed with a limit of two shows per user. In addition, identification will be required to allow traceability in case covid cases are detected.

For this reason, the Plaza Mayor will be shielded, limiting the area of ​​one thousand seats and controlling access from all points thanks to a team coordinated by the Municipal Police, Civil Protection, City Council personnel and private security. “We are talking about a complicated operation that seeks to avoid crowds,” said councilor Ana Redondo. Since the thousand people who attend the concerts must be added another thousand of the terraces in the Plaza. Of course, those who attend the concerts must occupy their location half an hour before the start of each performance, to free their seats in case of absence so that other people can enjoy them.

Ten concerts in the Plaza Mayor with limited capacity“We have renounced the massive concerts due to the restrictions but we believe that it is a powerful program for a capacity of a thousand people,” confirmed Puente, who had no doubt that the invitations will be sold out every day.

The budget for the parties, as detailed by the Councilor for Culture and Tourism will be 30 percent lower than that of 2019, the year before the pandemic, and the planned expenditure for the activities organized in the Plaza Mayor will be around 140,000 euros. The program will not be mailed to the neighbors, although it will be available in digital format for download, and the hotel establishments will distribute a total of 40,000 identifying scarves of the festivities.

More music, neighborhoods … In addition to the Plaza Mayor, the Poniente, the Portugalete, the Millennium Dome, the Campo Grande Pergola and even the patios of the centers for the elderly and the penitentiary will have a dose of prominence in parties that will not forget the neighborhoods, where Tío Tragaldabas and Tía Melitona will attend and where 30 performances have been scheduled between Friday 3 and Wednesday 8 September.

Plaça de Poniente and Plaça de Portugalete will bet on activities for the little ones, with twelve shows in the first, between concerts and magic performances; and an inflatable park and workshops, in the second. The Dome, for its part, will have 21 proposals that come from the Local Youth Council, which include poetry workshops, circus, boxing, cockfights or local music concerts. In the Pergola, music for older people will play a leading role, with the Valencian Francisco as the main attraction and the Valladolid Helena Bianco. While the Mixed Society for the Promotion of Tourism will offer a hundred guided routes, visits to the tower of the Cathedral and departures of the Tourist Bus. And the central Paseo del Campo Grande will host the 43rd Valladolid Ceramics and Pottery Fair between September 8 and 12.

Tradition will also have its moment, with the offering to Our Lady of San Lorenzo on Sunday, September 5; the mass on the patron saint’s day and the artistic carpet in honor of Our Lady of San Lorenzo, which can be seen in the Plaza Mayor from September 3 to 12 and will be carried out by volunteers from the city and the artisan José Gerbolés. And of course there will be fireworks, carousels, tapas …

Valladolid recovers its parties, after 2020 without them, “the best parties possible.”

The City Council will close Las Moreras to avoid bottles

“Mulberry trees will also be limited, so that there are no bottles.” The mayor, Óscar Puente, ratified this week that the area closest to the city center that was usually used by the youngest for their entertainment will be closed, as happened last year on these same dates or on the Night of San Juan , to avoid youth concentration and alcohol intake. The City Council is also betting, another year, on the campaign ‘Only yes is yes. Valladolid, free of sexist aggressions’, with two informative points in its fight against one of the scourges of today’s society. In addition, the City Council asks for citizen collaboration to avoid any type of crowds, both in the Plaza Mayor (especially at its entrances since there will be more control inside) and in the rest of the shows or activities where they can be given.