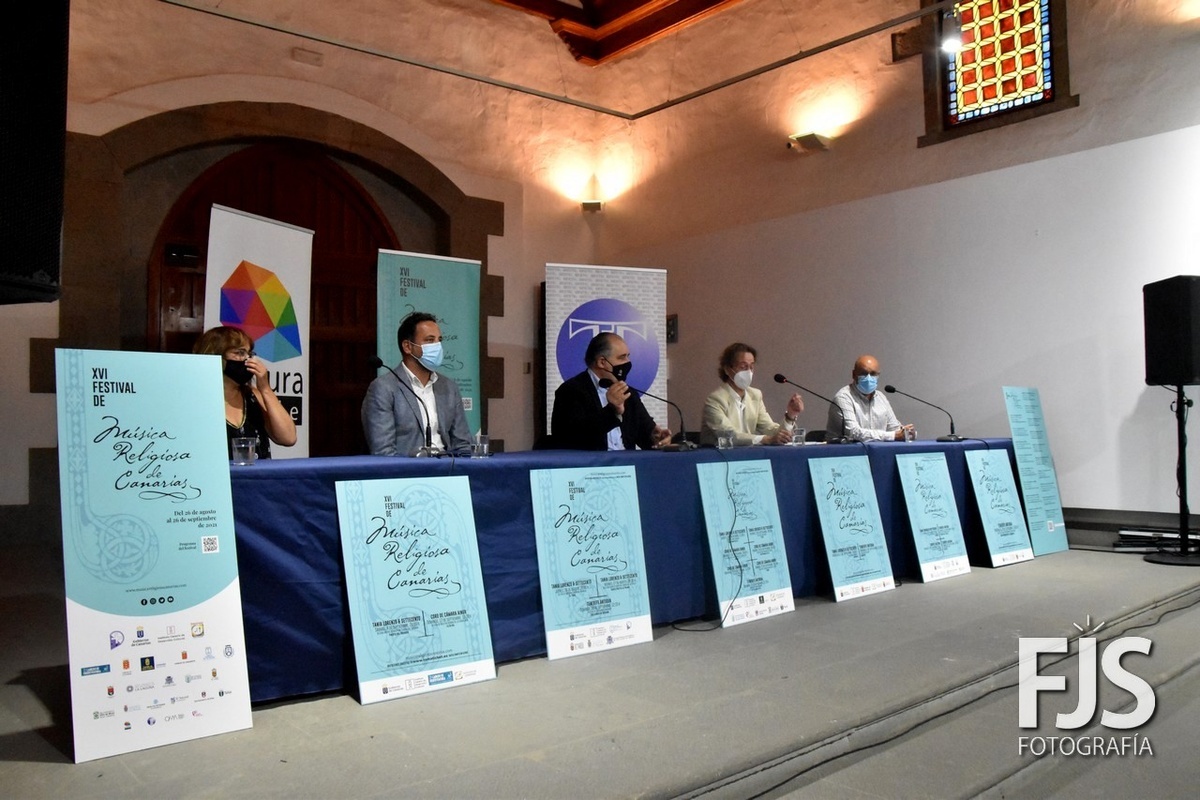 For the second consecutive year, Telde will host next September two of the 19 concerts scheduled at the Festival of Religious Music of the Canary Islands in its 16th edition with the collaboration of the Department of Culture directed by Juan Martel.

The first is on Friday, September 3 at 8:00 p.m. at the Basilica of San Juan de Telde with the participation of Tania Lorenzo and Settecento.

The second will take place in the same temple and at the same time on Sunday, September 19. The Ainur Chamber Choir will intervene on Wednesday, March 25 at 8:00 p.m. in the church of San Francisco.

The Canary Islands Religious Music Festival resumes in this sixteenth edition with 19 concerts that will be held in six islands of the Archipelago, after the special characteristics of the last edition, which was marked by the pandemic and forced the suspension in Ecuador of the celebration of the same, on March 13, 2020, without being able to finish as planned.

The festival, which will be held from August 26 to September 26, was presented today at the hermitage of San Pedro, in Telde, with the presence of the General Director of Culture of the Government of the Canary Islands, Rubén Pérez; the Minister of Education, Culture, Sports and Historical Heritage of the Cabildo de La Gomera, Rosa García; the Councilor for Culture and Leisure of the Telde City Council, Juan Martel; the First Deputy Mayor and Councilor for Culture of the Villa de Moya City Council, Octavio Suárez; and the director of the festival, Gregorio Gutiérrez.

During the presentation ceremony, the musical groups and the concert program were announced, which will take place on the islands of Gran Canaria, Tenerife, Lanzarote, La Gomera, Fuerteventura and La Palma, where the first concert will take place, which will be held It will be celebrated on the 26th in the municipality of El Paso (Iglesia Nuestra Señora de Bonanza, 8:00 pm, with the participation of Tania Lorenzo and Settecento, who will perform the Handel-Brockes program Nine German arias).

The general director of Culture of the Government of the Canary Islands, Rubén Pérez, valued the importance of recovering the listening of this type of music in the heritage spaces for which they were created and highlighted the need to decentralize these actions in the largest number of municipalities possible.

For his part, the Councilor for Culture of the Telde City Council, Juan Martel, expressed his satisfaction that such a consolidated festival in the Canarian cultural scene is present in Telde, “which endorses the great work that has been carried out in the municipality to achieve to become a cultural reference in the Archipelago ”.

The director, Gregorio Gutiérrez, stressed that the programming that will take place throughout these weeks has the participation of musicians with a lot of projection, as is the case of Tania Lorenzo, who will perform together with the group Settecento the Nine German arias, composed by Handel with religious poems by Brockes.

The three programs that make up the festival will offer 19 performances in 16 churches of the Archipelago, with a renaissance, baroque, classical and contemporary repertoire, through the works of prominent authors from the 15th to the 20th century.

He also placed special emphasis on the choice of Canarian musicians in this meeting, to continue with the commitment to local artistic values, classifying them as “excellent performers”. “The main purpose of the concerts continues to be to bring music to the greatest number of people to convey the passion of the artists through the careful repertoire that the festival presents,” explained Gregorio Gutiérrez.

The three programs that make up the festival will offer 19 performances in 16 churches of the Archipelago, with a Renaissance, Baroque, classical and contemporary repertoire, through the works of prominent authors from the 15th to the 20th century.

The Canarian Institute for Cultural Development (ICDC), the Telde Municipal Management Company (Gestel), the Autonomous Organism of Musical Activities of La Laguna (OAAM) and the Society for the Promotion of Las Palmas de Gran Canaria, as well as the Diocese of the Canary Islands, the Nivariense Diocese and the parishes and temples that will host the concerts.

The concerts of the Festival of Religious Music of the Canary Islands are of free access with free admission and limited capacity in the different performances, through the management platform tomaticket.es.

In Tenerife, the Religious Music Festival will take place, specifically, in the churches of Santo Domingo de Guzmán and Las Clarisas de La Laguna. The municipalities of Santa Cruz and El Sauzal will also host the meeting in the temples of San Francisco de Asís and San Pedro Apóstol, respectively.

It will also reach the churches of San Francisco de Borja and Santo Domingo, in Las Palmas de Gran Canaria; of San Juan, in Telde; and of Our Lady of Candelaria, in Moya. For its part, the municipality of Teror will also host the festival in the church of the Sacred Heart of Jesus.

It will also be held on La Palma, where the churches of Nuestra Señora de Bonanza, in El Paso; Our Lady of the Snows, in Santa Cruz de La Palma; and San Isidro Labrador, in Los Llanos de Aridante; will participate in the new edition of the meeting.

Tania Lorenzo and Settecento will perform on the islands of Tenerife, Gran Canaria, La Palma, Lanzarote and Fuerteventura. The artists will perform the program titled Nine German Arias. The singer Tania Lorenzo won the Prize in the International Competition Un Futuro DEARTE. For its part, Settecento is an innovative artistic project that aims to bring a repertoire based on European baroque music to the public.

The Ainur Chamber Choir will carry out the third program, with a varied selection of works ranging from the 15th to the 20th century, made up of emblematic works by renowned classics and composers. Mariola Rodríguez will lead the group, which will make an a cappella proposal that will take the audience on a journey through time.