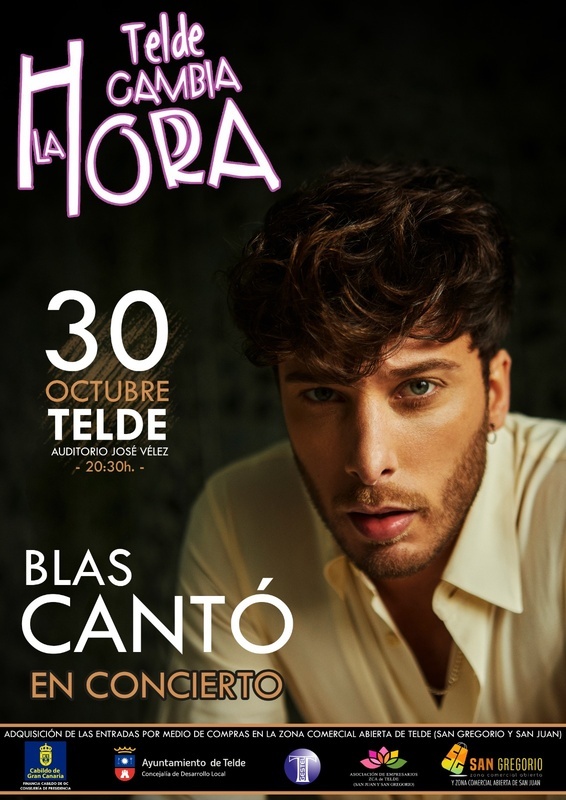 The Department of Local Development, directed by the mayor Lidia Mejías, will reissue, one more year, the event Telde changes the time with a concert by the artist Blas Cantó next Saturday, October 30, at 8:30 p.m., in the José Vélez Auditorium, located in the San Juan park. It is a revitalization action in which culture, leisure and commerce are merged in the Telde Open Commercial Zone, and subsidized by the Council of the Presidency of the Cabildo de Gran Canaria.

The main objective of this initiative is to publicize, revitalize and consolidate urban commerce by promoting the ZCAs of Telde, -San Gregorio and San Juan-. In this way, the tickets can be obtained in the shops that join the activity after the purchase of a minimum of 10 euros in the establishment. Thus, with each ticket the store will present its customers with a ticket valid for two people.

The person in charge of the area invites all the businesses of San Gregorio and San Juan to join this initiative by writing an email to desarollolocal@telde.es. “The formula for this event is directly linked to the Strategic Plan for Local Development, which encourages consumption in shops in the Telde Open Commercial Zone, and which this year includes establishments in San Juan as a novelty. To be able to attend the event, it will be necessary to previously make a purchase in a store, something that has a direct impact on these small and medium-sized companies in the municipality, “explains Mejías.

In the same way, the councilor highlights that “this is an action that, as pursued in the Municipal Economic and Social Reactivation Plan, contributes to the improvement of the commercial and economic fabric of the municipality, making known to both the companies and commercial areas to people who had not visited them until now. “

Companies interested in joining this initiative may do so until next Friday, October 15, and all the detailed information of the event will be made public through the municipal website www.telde.es and www.comprarensangregorio.es. The tickets will be exchanged with the purchase tickets from next Monday, October 18, in the stores registered in Telde changes the time.