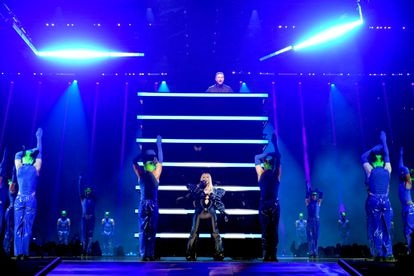 Rosalia You can already tell that you lost once. Not that it’s a big disappointment either. We are talking about the MTV Europe Music Awards 2022, better known as the MTV EMA, awards with relative relevance. If anything they have a curricular importance, to make a bundle. You already know: winner of gazillions MTV awards. And surely the Catalan will add many throughout her career. At the Sunday night gala held in Düsseldorf (Germany) she opted for five awards. None were taken. She even lost in the category of Best Spanish Artist, which went to the hands of the also Catalan Bad Gyal.

As soon as it was confirmed that Taylor Swift was in Düsseldorf you did not have to be a great expert in finery to bet on the American. Especially since the other favorites, Harry Styles (with seven nominations), Nicki Minaj (five) and Rosalía (five) were not around. Swift swept the MTV EMAs. Out of the six awards she was up for, she took home four: Best Artist, Best Pop Artist, Best Video, and Best Long Video. Her perfunctory speeches (“thanks to the fans, they’re the reason I’m here” and the like) became routine at a gala hosted by British singer Rita Ora and the handsome New Zealand filmmaker Taika Waititi (Oscar for JojoRabbit and responsible for Thor: Love and Thunder). The host couple were enthusiastic, active (constantly changing locations) and fair with a sense of humor. Not because they didn’t try, but because most of the comments went through commonplaces. They performed, among others, Gorillaz, Muse, Lewis Capaldi, Stormzy, Ava Max, Bebe Rexha, David Guetta or One Republic. The only Spaniard who went on stage was the actor Miguel Angel Silvestrewhich gave the award for Best Latin to the Brazilian Anitta. Yes, the one that dogged Isabel Díaz-Ayuso at another gala, the LOS40 Music Awards.

These were the highlights of the gala:

The start of the gala could not have been more brutal. It started with no introductions. To the jugular. A large platform was positioned at the center of the stage. Upstairs was a coiffed David Guetta, who began to manipulate buttons, probably doing the paripé, because he has everything recorded. The one who did a lot was the New Yorker Bebe Rexha, with a very powerful voice. Together they offered the whiplash I’m Good (Blue). A handful of dancers helped light up the party. which continued with muse and that number that we already saw in his summer concerts in Spain: the interpretation of Will Of The People with the initials of the song burning in the back of the stage. Well that: dynamite to start.

That restless and non-conformist type called Damon Albarn He performed at the MTV EMAs alongside Californian Thundercat, a reincarnation of the great Bootsy Collins. They put everyone to dance with Crackers Island, a very personal review of funk. She was accompanied by a female chorus that added finesse to the song’s muscular base. How curious about Gorillaz: Albarn formed it to have fun and without any plan and next year he turns 25. At this rate it will be more important than Blur, the group that made Damon a star.

The most popular group in Düsseldorf is kraftwerk. They were created in 1970 and since then they have been influential and claimed by everyone who knows about music. Fundamental to understand the evolution of electronic music in pop. They were honored at the gala (remember: it was held in Düsseldorf) at different times, with more or less imaginative projections and highlighting their many qualities. All with declarations of love from different musicians, such as Dr. Dre or Nile Rodgers. A pity that the organization did not convince them to be there, because the surviving members were active until recently.

Since the decline, back in the early eighties, disco music, had not experienced such fury as in recent times. We talked about the influence of mischief that Giorgio Moroder I did in the seventies for, for example, Donna Summer. Beyoncé and Dua Lipa are the best examples of this disco fever today. Let’s add Ava Max, who last night sang that hit that is Million Dollar Baby. The American has all the qualities to climb to the same level as Dua Lipa. Her new album comes out in January 2023.

In addition to acting, Muse took home the award for Best Rock Band. The trio must have known for 15 days, because when he heard his name he did not show the slightest surprise. The British don’t seem like good actors. Muse dedicated her award “to the women of Iran who are fighting for their freedom and to the people of Ukraine.” Along these lines, the MTV EMA Generation Change Award was also awarded to three Ukrainian women (Lina Deshvar, Anna Kutova and Anfisa Yakovina), who fight for the care and rights of people affected by the humanitarian crisis in Ukraine. The tributes to Ukraine ended with a performance by the Kalush Orchestra.

These are the main winners:

Il Divo: singer Carlos Marín, member of the opera musical group, died
Max Yasgur, the farmer who left his property to celebrate the Woodstock Festival
Rosalía released a preview of the official video for “Despechá”, the song of the summer in Europe th...