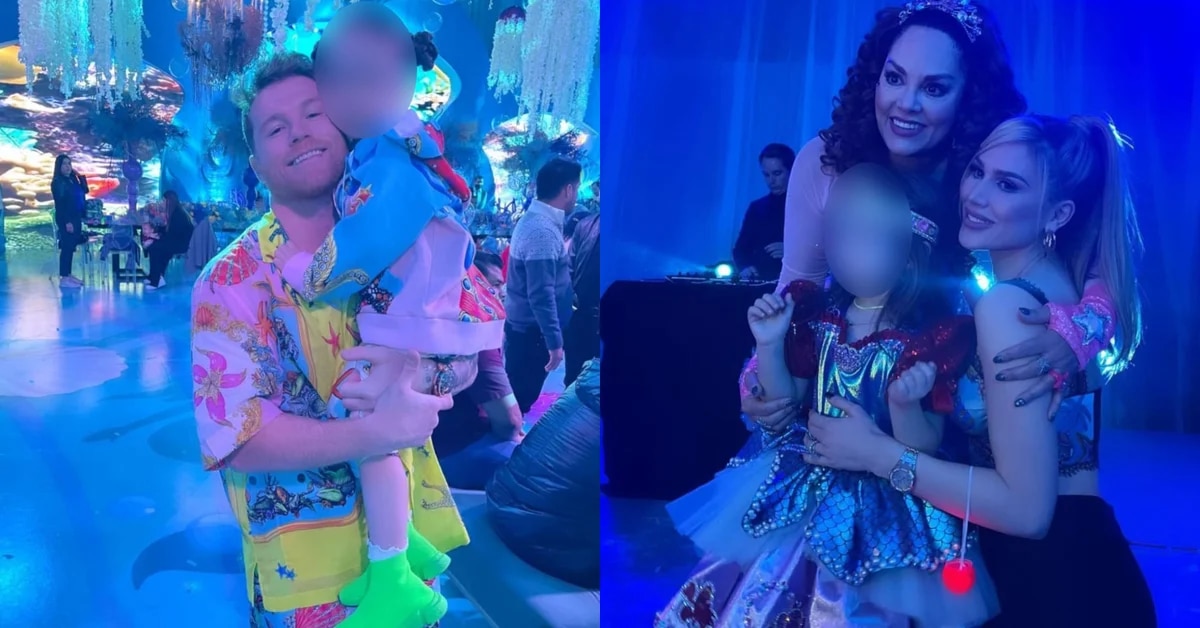 The daughter of Saúl “Canelo” Álvarez, a Mexican boxer, reached the age of four, and together with her friends, family and, of course, her father and mother, she had a great celebration.

Through social media, the wife of Canelo Alvarez, Fernanda Gómez, released the images of The luxurious party they held for their little girl’s fourth birthday. They threw the house out the window.

The first images give an account of an impressive ballroom, the location of which was not revealed, but it certainly had an impressive decoration with the theme of Disney’s “The Little Mermaid” movie.

“Mafer, the fair” was the huge sign that welcomed them to the castle. The walls they were completely upholstered in blue, as well as various figures allusive to the ocean floor, corals, sea shells, reefs, and so on.

Also, there was a screen between arches shaped like seashells, and suspended bubbles fell from the ceiling. There was also elegant chandeliers to give lighting to the scene.

Other people who also appeared were various imitators of the characters from said film. Among them they could see Ariel, Ursula and Prince Eric, who had various interactions with the celebrant and her guests.

The Mexican boxer appeared at the party and the postcards with an elegant light-colored suit jacket and black pants, as well as a bowtie; however, it was changed midnight to use a sports set with drawings of the seabed.

Fernanda, meanwhile, was portrayed with a sober outfit that left all the attention to her little girl, but once the black jacket was removed, we could see a very themed blue top to this with the party, with rhinestones and shells. Also, he combined it with a black flared pants, perhaps simulated a mermaid tail, as well as black boots with a white platform. Her makeup was done by Thalía Barajas.

Then the child singer appeared on the scene by experience in Mexico, Tatiana. “Thank you, Mafer, for inviting me to your birthday, and to your parents Canelo and Fernanda,” the interpreter wrote on her social networks.

During the concert, Canelo’s little daughter she was not just another spectator, as they also invited her to the stage, where she held a microphone to sing your favorite songs and dazzle everyone with your best dance steps. A future artist, possibly.

On the outskirts of the enclosure, where they made the classic piñata, which, by the way, had the shapes of the characters from the maritime movie of Disney, you could also see an immense wheel of fortune, illuminated in various colors with led spotlights.

To finish off the sweet touch, after the piñata they showed an incredible table of sweets that had themed cupcakes with starfish and shells, brownies of different flavor, squid caviar, fish-shaped biscuits, chocolates, cakes, ice creams, Popsicles, malted, And a long etcetera.

At some point in the party, the adults had the opportunity to enjoy a moment, because in various Instagram stories, shared by Fernanda Gómez, you can see that dancing reggaeton, no longer with children around.

It is not the first time that the couple shows us the luxurious birthdays that you organize for your little girl, to whom they only want to give the best experiences of their life during childhood.

Who was Herman López, voice actor in The Simpsons, Finding Nemo and The Powerpuff Girls
From teasing men to rejection of their body: Martha Debayle’s suffering before she became famous
“Who is the Mask?”: Everything we know about the final and the possible artists behind the costumes