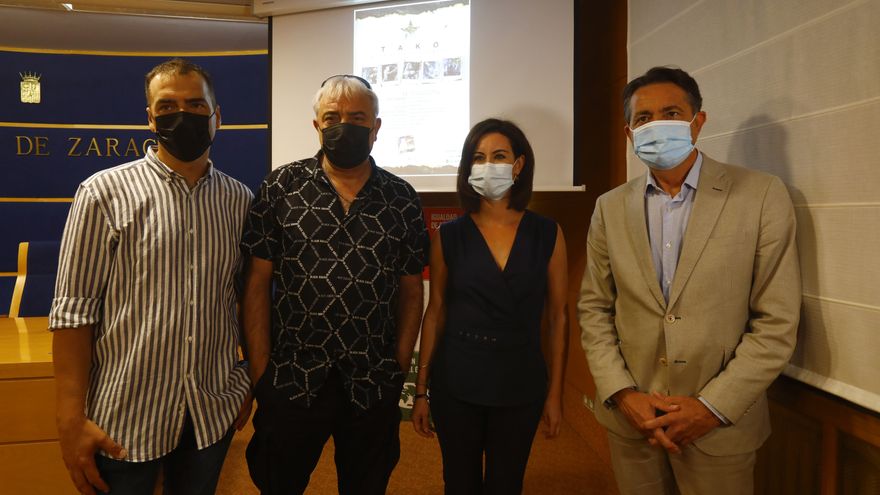 Presentation act, this Friday, of the next concert of the Ejeana band Tako.
ANDREEA VORNICU

The Ejea de los Caballeros bullring will be the scene of the anthological concert ‘Ayer, hoy, por siempre’, by the Ejea rock group Tako. The event, which will be broadcast live on the Aragón Cultura website, will take place this Sunday, September 12, at 9:00 p.m. In addition, the Aragonese musicians will be accompanied by Kutxi Romero (Marea), Ramoncín and Pedro Razkin (La Fuga), among others.

The vice-president of the Diputación de Zaragoza (DPZ) and mayor of Ejea, Teresa Ladrero, has advanced the details of the celebration of the concert, accompanied by the general director of the Aragonese Radio and Television Corporation (CARTV), Francisco Querol, the group member, Nacho Jimenez, and Tako’s manager, Carlos Martinez.

After exhausting the thousand tickets that were put on sale, Tako fans will be able to attend the concert virtually, which will be broadcast live in Aragón Cultura, at 9:00 p.m. and with a deployment of six cameras, as well as a crane, creating a sense of presence on stage. Once the event ends, it will remain available on the website of the specials issued by the platform.

“Today we can say that Tako is the best active Aragonese rock band, which has already published 18 albums, something that must be highlighted “, Teresa Ladrero has pronounced, who has emphasized that they have a” very important “added value, all of their members are from Ejea” and they have never given up on continuing to live in our municipality “.

For his part, the general director of CARTV, Francisco Querol, has trusted in offering a performance “at the height of what this event deserves”. “We want to ensure that those viewers who watch the concert online have a feeling of immersion”, has highlighted.

Recognitions in his native Ejea

Ladrero, who has reviewed the trajectory of the group, recalled that Tako has the Gold Medal of the Villa of the year 2011, “because he is part of the select group of collectives and people who are relevant and who spread the Ejea brand everywhere. and places”.

In addition, it has announced the next inauguration of a square with the name of the group: “His fan club asked us to have a plaza in the town, which is right in front of the bullring, on Paseo Constitución, called Plaza Tako.”

This anthological concert is also a tribute to Tako’s first drummer, Pedro Segura, who recently passed away. They will accompany the band from Ejea Kutxi Romero, from the Marea group; Ramoncín; Pedro Andreu, from Héroes del Silencio; Jorge Salán, from Avalanch; Pepe Bao, from O’Funk’illo; Aurora Beltrán, from Los Tahúres Zurdos; the vocalist of La Fuga, Pedro Razkin; and others like Roberto Flores, José Miguel Pérez and Pau Álvarez Santacatalina.

Regarding the themes to be performed, “We have chosen a compendium of songs with which we will try to explain the evolution of the group through time”, said Nacho Jiménez, a member of Tako. In this way, the songs that will have a special weight on stage will be ‘Qué no daría’, and two new compositions, ‘Although it costs us life’ and ‘La isla’, have advanced from the band.

The Ejea City Council, organizer of the event, will allocate the entire collection of the tickets to the Spanish Association against Cancer (AECC). Likewise, this musical event is part of the cycle of eight concerts ‘Let’s clap your hands’, which began in mid-July and has brought artists such as Rosario, B Vocal, Vinilos Rayados, Super 8, Villa y sus Dorados and El Silence of the Heroes.

Tako’s new album, of which two songs will be played next Sunday, will be released, predictably, in spring 2022, although all the songs are composed while waiting for financial resources for their recording.