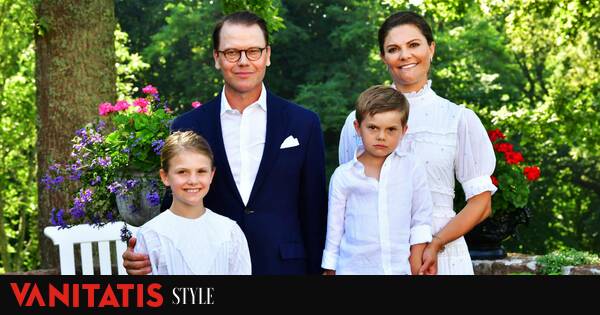 July 14 is a big day for the Swedish royal family. Princess victoria birthday and to celebrate it always organize a party in Solliden Palace, the summer residence of the Bernadottes, located on the island of Oland. Last year, the heiress could not celebrate it due to the coronavirus pandemic; However, this year she has been able to enjoy it like never before, also accompanied by all the members of the royal family, except for Sofia Hellqvist, who is on maternity leave after the birth of their third child, Prince Julian, last March.

In the past, it was tradition that in the morning the heiress met those Swedes who came to Solliden to give her their best wishes in the first person. The princess then received gifts from her citizens, such as bracelets or handmade things, and it was already a custom that they sing her ‘happy birthday’, but to avoid the risk of contagion, this year it has been decided to cancel this event and celebrate alone the concert, which took place very close, in the ruins of Borgholm castle, and in which the heiress has presented the Victoria award, destined this year to the skater Nils van der Poel.

The princess has chosen to celebrate her 44 years a retro air dress with lace from Swedish firm By Malina, with short sleeves, high gathered neck, marked waist and midi length, which has been combined with wedge espadrilles. Estelle, 9 years old, wore clothes that were very similar to her mother’s, so much so that they seemed to go together. The one who is destined to one day be queen of Sweden also wore a white design with romantic airs with matching dancers. Also Oscar, 5 years old, wore a white shirt with beige pants. Not so Daniel, who has opted for dark colors, with khaki pants and a navy blue blazer.

Although mother and daughter were gorgeous, it was princess Magdalena the one that has drawn all eyes, perhaps because it had not set foot on Swedish soil for almost two years, since before the start of the pandemic. Residents of Florida for years, Magdalena and Chris O’Neill have decided to spend this holiday in Sweden with their three children, Leonore, 7, Nicolas, 6, and Adrienne, 3. The three little ones were not present. at the concert, although the marriage has been very well accompanied by prince charles philip, which, as we have said, has attended without Sofia.

The youngest of the kings of Sweden, considered one of the great beauties of European royalty, has shone with a spring white dress with a pink flower print, puffed sleeves, midi length and V-neckline. A design that Magdalena has combined with white Valentino studded espadrilles. The princess also wore some showy pearl earrings forming a hoop.

Last February, before the health crisis broke out, Magdalena was forced to move. A robbery at his Miami home made him search for a new property with more security. The current situation of her three children is also different from what they had two years ago, when they last traveled to their country. Adrienne, Leonore and Nicolas no longer belong to the Royal House, as King Gustavo decided to reduce the number of members in order to reduce public spending. Both they and the children of Carlos Felipe and Sofía no longer have the treatment of royal highness or any type of institutional role representing the Crown.