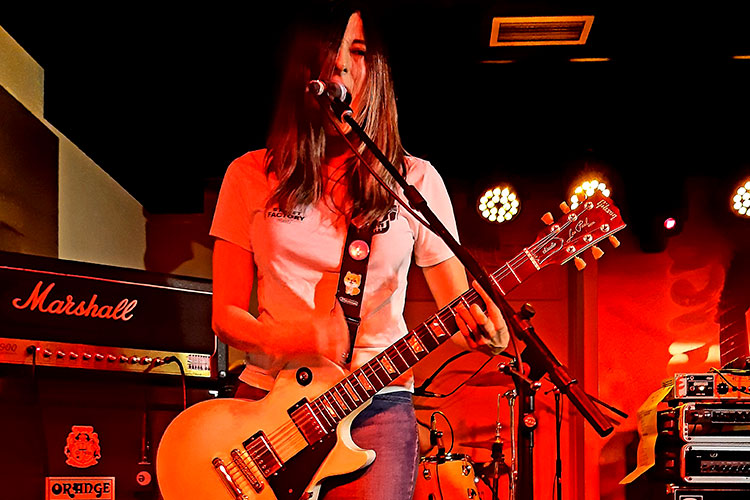 The female section of the Zamorano musicians collective –aka MUBAZA FEM– was in charge of organizing the first edition of the Super Sonic Rebel Fest, an event that they were pleased to carry out on the stage of La Cueva del Jazz en Vivo. A poster made up of three female bands possessing, all of them, forceful sounds, and in practice they were exposed with fury and generous doses of intensity.

Happened with Break The Senses, who have a couple of albums and several EPs to their credit and were in charge of opening the evening with a performance that showed influences from Hüsker Dü, The Breeders, Muse or Royal Blood. Despite having a newly incorporated drummer, the truth is that the trio from Malaga in which Ana Rocío GF and Priscila Rey are active left a very good taste in the mouth as they passed through the capital of Zamora. Quite more visceral but equally solvent turned out to be the performance of Las Sexpeares, again in trio format but in this case from Barakaldo. His are songs torn and open on the channel that do not reserve anything, well influenced by NOFX, Sonic Youth or Bad Religion and turned towards 90s punk and noise. Led by the executive impudence of its vocalist Belén B. (well supported by María M. on drums and Aitor K. on bass), the combo left a supposedly accelerated concert based on themes of explicit content.

For its part, Agoraphobia It was by far the most rolled band on the lineup –the Galicians can boast of two notable albums such as ‘Incoming Noise’ (Dotbeat !, 17) and ‘Unaligned’ (Dotbeat !, 16) and they’ve even performed at the SXSW festival in Texas – something that was palpable from the moment they picked up the instruments. The quintet proved to be the possessor of ambitious and very well-crafted songs, which they bring to the live with confidence and a seamless sound. Their concert started out as devastating and, although the initial euphoria at their proposal (always well executed) was relaxing as the minutes passed, the Galicians showed that they are all safe when they stand on the stage. Especially if you are a fan of groups like Incubus, Garbage or Placebo.

The first edition of Super Sonic Rebel Fest Promoted by MUBAZA FEM with the support of the Zamora City Council, it ended, in any case, with victory, harvested by three groups more or less settled but still young, of moderate popularity and with a generous journey ahead. An interesting initiative and to be appreciated that, once again, proved that credibility does not understand genres when it comes to giving wax.

Super Sonic Rebel Fest, chronicle of the concerts in Zamora (2021)