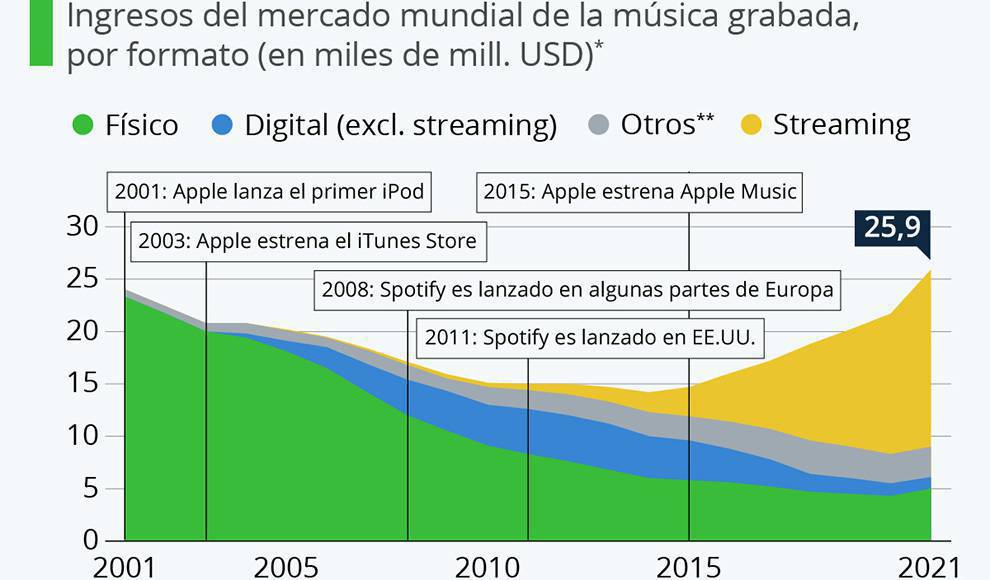 Streaming gives a second life to the music industry: seven years of sales growth to its best level in the 21st century.

2021 was again a favorable year for the music industry. According to the latest report prepared by the International Federation of the Phonographic Industry (IFPI) worldwide recorded music revenue was $25.9 billion Americans last year, that is, almost 18.5% more than the 21,900 million reached in 2020. The music industry thus chains its seventh consecutive year of growth, after almost two decades of gradual decline.

Paradoxically, the transition to the age of digital distribution has led to both the decline of the music industry and its revitalization. After the golden age of CDwhich propelled music revenues to unprecedented levels during the 1990s, the advent of the MP3 and file sharing shook the music industry like an earthquake.

Between 2001 and 2010, physical music sales fell by more than 60%, from 23.3 billion to 9.1 billion dollars. In that same period, digital music sales (including streaming) went from zero to $4.3 billion, which it wasn’t enough to make up for the drop in CD sales.

The music industry hit rock bottom in 2014when total billing was $14.1 billion, its lowest level in 20 years. It wasn’t until the advent and widespread adoption of streaming services that the fortunes of the recording industry changed again.. This can be seen in this graph Statistical.

After some initial reluctance to embrace streaming services, both record labels and artists seem to have followed suit with consumers, accepting that the future of music lies in digital distribution. Last year, the digital segment accounted for the largest share of music revenue worldwide, with streaming services alone accounting for 65% of the loot.