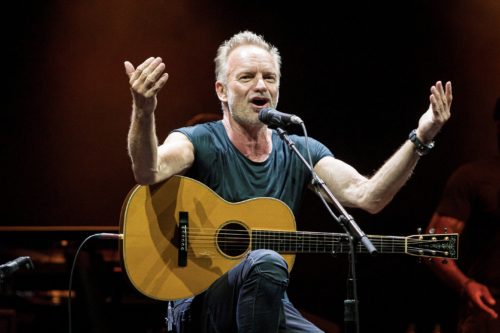 Listen to the note:

Sting turns 70 years old and in memory is still alive that memorable and strange concert that The Police offered in the Great Hall of the Hotel de México (now the WTC) that November 15, 1980.

Of that trio, stood out a slim, blond boy with a serious appearance and hairstyle still with the remnants of the punk movement … that was Sting

With almost four decades of musical career, whoever was a teacher before achieving the success of the band and afterwards as a solo artist, reaches what is known as the seventh floor.

Related information: Sting will celebrate 64 years of life with a performance in Morelos

Why is it called Sting?

The British musician was born on October 2, 1951 in Wallsend, North Tyneside, England.

The nickname of Sting (sting in Spanish) arose in the most fortuitous way, like almost all the great things in life.

One time he was playing his bass with the Newcastle Big Band and he was wearing a black and yellow striped shirt and a colleague told him he looked like a bee, after which everyone started calling him Sting, it was the mid-seventies.

He liked the nickname so much that he uses it as a stage name exclusively since then, except for official documents.

In an interview with Interview Magazine in 1983, in the peak years of his career with The Police, he said: “My real name is Sting.”

From that time it was evident the importance that he gave to his nickname to the degree that his real name was relegated to the background.

“The name they gave me when I was born was Gordon Matthew Sumner, but I had no choice in that matter. I did have a choice with Sting, so I think my real name is Sting, ”he said in the same interview.

In addition to music, Sting also participated in small roles in the cinema.

During the eighties and nineties he had participation in some films such as ‘Quadrophenia’, based on the rock opera by the English band The Who.

He also had a role in the film ‘Dune’, a 1984 American science fiction film directed by David Lynch and based on the novel by Frank Herbert.

In 1980 The Police made a presentation in Mexico, which was even announced in the newspapers of the time.

The peculiar thing about that concert was the place and the public that attended to see the only presentation in the country of the band led by Sting, alias Gordon Matthew Sumner, in a few years in which massive concerts were totally forbidden.

The chronicles of the time narrate that the concert took place in a hall for social events with tables adorned with long tablecloths and formal waiters serving wine.

Before a concert in Vancouver Canada, in 2007, the group was asked if they remembered any strange concert, the drummer Stewart Copeland replied: “I remember a concert in Mexico in 1980, it was an elegant event hall, there were people dressed in formal clothes, waiters dinner and red wine were served in a dinner jacket, we started to play and people went crazy, they blew up the chairs, the tables, up to the stage came the ties muddy with tomato sauce and pepperoni pizza … “

Thus, in these avatars, Sting turns 70 between concerts, music, movies and his inseparable bass.