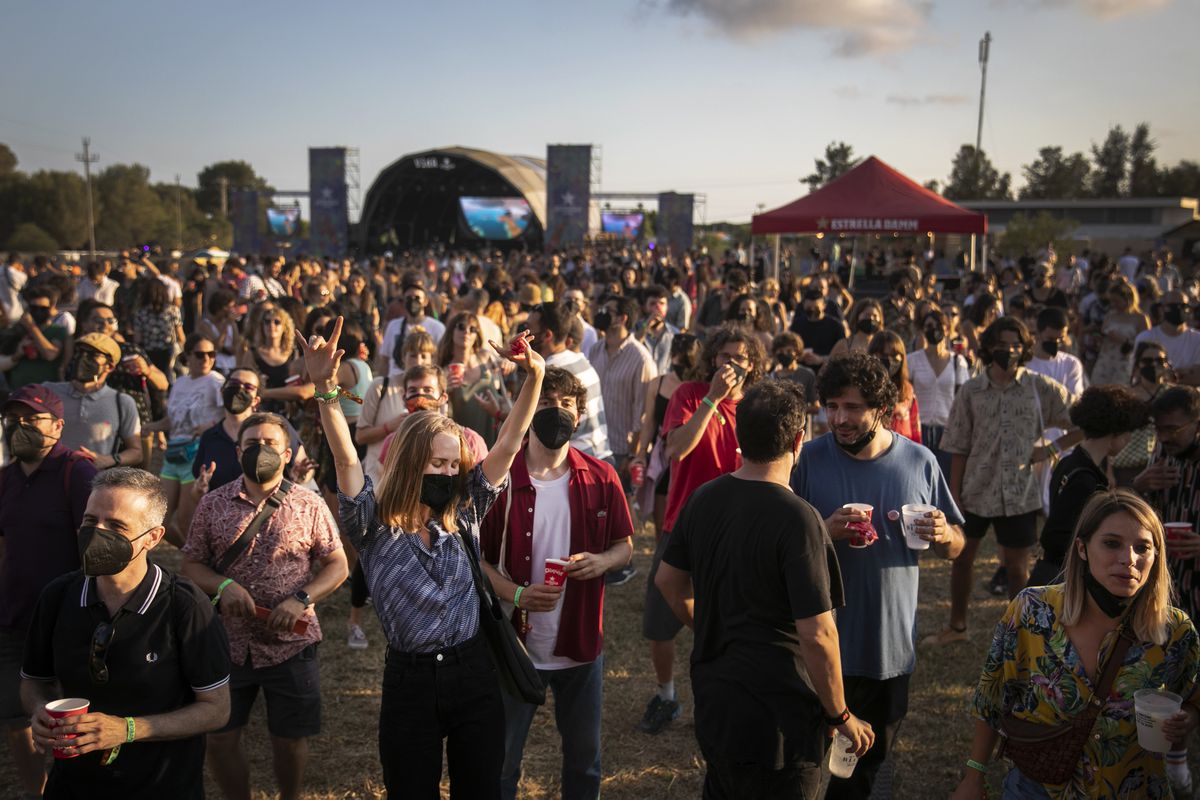 “Do you have the QR of the application, the DNI and the ticket?”. That is the triple question that those attending the Festival life They had to respond every three meters as they advanced through the corridors that faced the 88 booths in which they performed the antigen tests that open access to the enclosure. It is the new normal applied to festivals, and fate has wanted the VII edition of the Vilanova i La Geltrú (Barcelona) event to be the first to take place in the country since the covid made an appearance in 2020 .

The Life, a international Festival that lasts three days and that brings together auteur, pop, rock and electronic music in a very eclectic lineup with a marked accent indie, tries to offer an experience of music, nature, sea, art and gastronomy in a bucolic setting: La Daurada Beach during the day and then Masia d’en Cabanyes at dusk. Among the artists in this edition, names such as those of Old Morla, Rigoberta Bandini, Nathy Peluso Y Love of Lesbian. The first day has brought together 10,000 people.

The director of the festival, Dani Poveda, has not stopped still on this first day, determined to verify that the operation worked, which happened until mid-afternoon when the internet momentarily went down for one of those reasons that nobody assumes as their own responsibility. The public, who as always is the most enthusiastic and patient component of festivals, was limited to waiting. The Life was on.

The health test, free, fast and minimally invasive (not nasopharyngeal, but only nasal), gave its verdict in just 10 minutes, which the care consumed like someone waiting for the result of an opposition, in this case in the shadow of the industrial warehouse where a device with 166 toilets was located.

Beyond six in the afternoon, only three positives had appeared, to which the amount of the tickets was returned, and Poveda, in contact with the specialists who have advised the festival, calculated that they could reach ten throughout the day . Even so, he specified that “since the R rate is rising, this calculation may be short.”

Once the negative was known, the public left the industrial environment of the test to walk through the vineyards to the festival site, always having the Mediterranean in sight. At the entrances, again the triple question, with the added difficulty of the code readers capturing the signal under a sun on the first of July. Patience. Ahead I was waiting for the first festival of the year.

Once inside the enclosure, it offered all the comforts to the scarce public present at those initial hours of the appointment. Scenarios in the forest, a lot of wood as a constructive element, straw bales as seats, pine trees and olive trees everywhere and a central square that houses the two main stages (there are four), which was the only area where dust reigned. Although with a mask you could not breathe. Of course, in this very sustainable environment there are also drawbacks, and Marina, 28, who was attending the event for the first time, showed a fist-sized tiger mosquito bite. However, the young woman was in a good mood: “In other years work had prevented me from coming even though I had a ticket, so nothing happens because of a mosquito,” she said.

Respect for the mask

Attendance, either in their twenties nearing settlement or in their thirties released with some slack, body only for comfortable festivals like this, was taking positions little by little. Virgin, 35 years old, settled in the same town of Vilanova i La Geltrú, but from Alfaro, explained it: “I have gone to Benicàssim, Azkena and other festivals, but I am no longer sleeping in a tent.” That is what Life offers.

“I have never come. And although the exclusively national poster doesn’t kill me, I wanted to festival, open-air music, do something, “explained a couple from Vic. And yes, the vast majority of the audience was either from the area or from the rest of Catalonia. Foreigners, as rare as a chorizo ​​sandwich in restaurant areas.

Before the first night raised hook artists such as Vetusta Morla, Rigoberta Bandini or Joe Crepúsculo, the only sound when the sun fell almost flat was that of the sound checks, an instant as democratic as a traffic jam that paralyzes even a utility vehicle and a sports car with foot upholstery. And it is that in this type of tests no one is differentiated, lost as the musicians are in their jargon, and conversations with their technicians.

They had to wait for The New Raemon to rehearse with By tradition to be recognized between drum taps. A little later, Paula Valls performed on one of the forest stages before a small, but enthusiastic audience that also applauded so that the sound of the wind in the foliage did not impose itself. The proposal, a mixture of folk, soul and pop, caressed as much as the same wind that mitigated the sun that filtered through the branches.

And little by little the first summer festival without social distance was taking shape and showing its proposals. Stores selling souvenirs They raised their closing boards, the first ecological and sustainable sandwiches fell and the beers began to pass from hands. Those were the only times when masks could be avoided, and the rule of having the face covered was an overwhelmingly respected watchword.

Later, when the drink increases its effects, it will be necessary to see if scrupulous respect is maintained for the rules that the public has maintained in all the previous concerts and cycles. In fact, some posters remind you that even in the privacy of the sinks it is necessary to wear a mask. Everything is to flatten the contagion index.