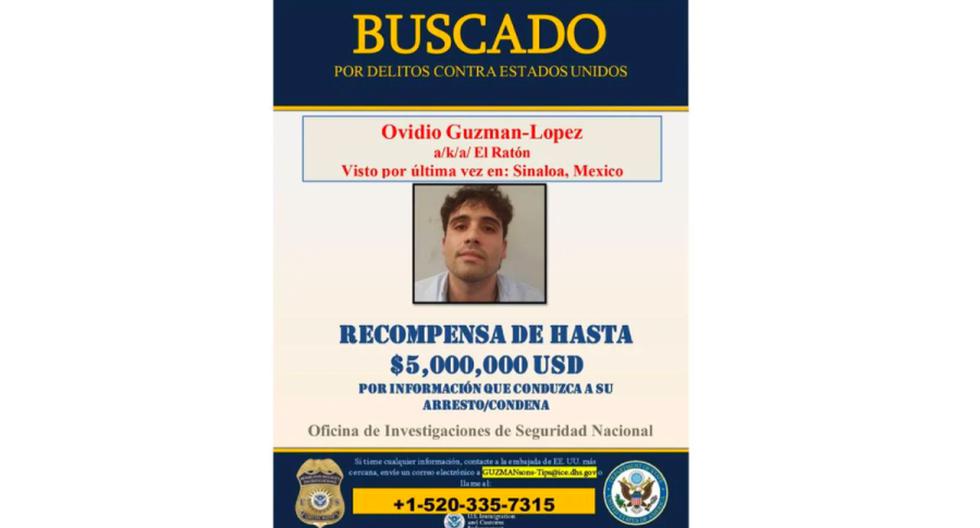 The United States Department of State today released the posters of “Wanted“Of the children of Joaquín “El Chapo” Guzmán. A new executive order from Washington, issued Wednesday, offers $ 5 million for the arrest of each of Guzmán’s four children, as part of its strategy against international drug trafficking actors.

The US agency revealed the orders against Ovidio Guzmán-López, Iván Archivaldo Guzmán Salazar, Jesus Alfredo Guzman Salazar Y Joaquin Guzman Lopez, son of “El Chapo”, Sentenced to life imprisonment in the United States, which are part of a list of 25 targets related to the trafficking of synthetic opioids.

Ovidio ordered the murder of “a popular Mexican singer”

About Ovidio Guzmán-López it is mentioned that “He has ordered the murders of informants, a drug trafficker and a popular Mexican singer who had refused to sing at his wedding.”

It is also stated that “Following the arrest and subsequent extradition of their father and his conviction in the Eastern District of New York (EDNY), the Guzmán-Salazar brothers have increased their power within the Sinaloa Cartel. They have expanded their business with sophisticated fentanyl laboratories in Culiacán, Mexico, and have expanded their transportation operations using ocean and air transportation, as well as tunnels and border crossings”.

The State Department recalls that “On July 25, 2014, Iván Archivaldo Guzmán-Salazar was indicted by a federal grand jury in the Southern District of California. The indictment charged him and others with violations of Title 21, USC §§ 952, 960, 963 (conspiracy to import methamphetamine, cocaine and marijuana) and Title 18 USC Section 1956 (h) (conspiracy to launder monetary instruments) . The indictment also included forfeiture provisions”.

About Jesús Alfredo Guzmán it is also mentioned that “On August 6, 2009, and again on February 17, 2016, a federal grand jury in the Northern District of Illinois returned replacing indictments against Jesús Alfredo Guzmán Salazar and other co-conspirators with violations of Title 21, USC, § 846 (conspiracy to possess with intent to distribute and distribute more than 5 kilograms of cocaine and more than 1 kilogram of heroin); Title 21, USC, § 963 (conspiracy to import more than 5 kilograms of cocaine); and Title 21, USC, § 841 (a) (1) (distribution of more than 1 kilogram of heroin) ”.

In addition, police investigations indicate that Joaquín and his brother, Ovidio Guzmán-López, perform high-level command and control functions in their own drug trafficking organization, the Guzmán-López Transnational Criminal Organization, under the umbrella of the Sinaloa Cartel.

It is detailed that “after the death of Edgar, Joaquín and Ovidio inherited a large part of the profits from narcotics and began to invest large amounts of cash in the purchase of marijuana in Mexico and cocaine in Colombia. “They also began to buy large quantities of ephedrine from Argentina and organized the smuggling of the product to Mexico when they began to experiment with the production of methamphetamine (…) On April 2, 2018, both Guzmán-López brothers were prosecuted for a Gran Federal jury in the District of Columbia and charged with one count of 21 USC Sections 959 (a), 960 and 963 (conspiracy to distribute more than 5 kilograms of cocaine, 500 grams of methamphetamine and 1,000 kilograms of marijuana) ”.

The president of Mexico, Andrés Manuel López Obrador, said this Thursday that it is up to his government to arrest the children of drug trafficker Joaquín “El Chapo” Guzman.

“If they are in national territory, it is up to our authority to stop them, no foreign force is allowed to act in this matter and in any other in our territory.”Declared López Obrador in his usual morning press conference.

López Obrador recalled that in October 2019 he ordered the release of Ovidio Guzmán after an operation that had managed to capture him in Sinaloa, but that triggered the reaction of “a greater force and all the deployment “ of the criminal group that put the population at risk.

“If we did well, if we did wrong, history will tell”, expressed the president.

In addition to the Guzmán, among the US targets (10 people and 15 groups) are the bands Los Rojos and Guerreros Unidos – which emerged from a split in the Beltrán Leyva cartel – which are also identified as responsible for the trafficking of heroin to the United States.

López Obrador indicated that his American counterpart, Joe Biden, has not discussed this matter with him and stated that in Mexico “It is no longer allowed”The intervention of foreign agents in operations. He admitted, however, that “The United States government has every right to act.”

“Many Americans, more than 100,000, have lost their lives due to the consumption of these drugs, which are very dangerous, and that is why they made this decision”, Assured López Obrador.

Both countries activated this Tuesday a “New stage” of security cooperation following the October visit of US Secretary of State Antony Blinken.

Foreign Minister Marcelo Ebrard and the US Ambassador Ken Salazar they installed a “High-level group” which includes five work teams to address issues such as the fight and persecution of criminal groups that operate in the two countries. Ebrard remarked that it is about “An alliance based on trust and mutual respect” named “Bicentennial understanding”And that leaves behind the so-called Mérida Initiative.

In late November, a US federal court sentenced the man’s wife to three years in prison. “Chapo”, Emma Coronel, for her participation in the powerful cartel led by her husband.

The war on drugs has been a recurring theme in the United States for decades, with uneven results compared to a business that moves billions of dollars.

The new variant B.1.1.529 of covid-19, detected for the first time in southern Africa, was classified on Friday as “worrying” by the World Health Organization (WHO) and will bear the name “omicron”.