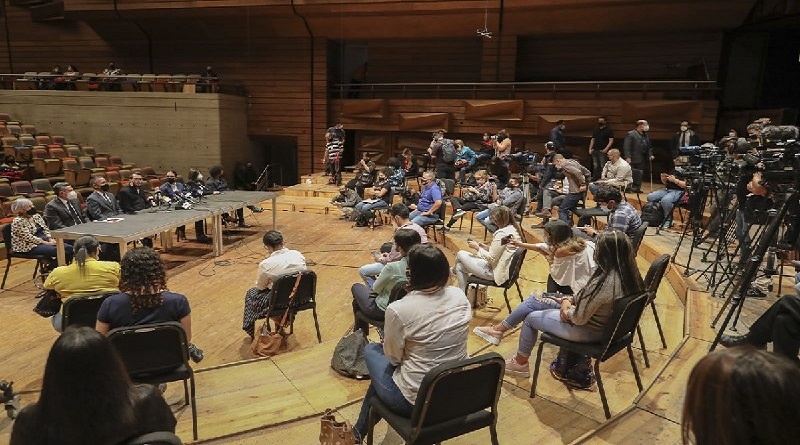 A total of 12 thousand children and young people of the National System of Youth and Children’s Orchestras and Choirs of Venezuela they will seek to place their name in the book world record as the largest orchestra in the world with the interpretation of the Slavic March of Pyotr Ilyich Tchaikovscky in the Patio de Honor of the Academia located in Caracas.

In a press conference issued this November 11 to the media, by various authorities of the country, the executive director of the System, Eduardo Mendez, detailed that it is a historical event that will have the participation of 6 directors who will be in charge of the performance of the aforementioned musical work.

He reported that they will also be singing the notes of different musical works in order to make Venezuelan music known to the world.

The concert is scheduled to begin at 4:00 pm and can be viewed through the Telesur signal.

He said that the children belonging to the Orchestra System have been rehearsing, receiving training and workshops for 2 months.

#EnVideo || Executive Director of @elsistema, Eduardo Méndez: The Venezuelan population will be able to enjoy live on Saturday #13Nov of this historic event in every Plaza Bolívar in the country to support our Orchestra System.#VenezuelaMusical pic.twitter.com/NjTXTqeW7K

To carry out these events, each child will be given a biosafety kit. In addition, each participant underwent a PCR test against COVID-19 in order to avoid the contagion of the deadly disease.

“All biosecurity measures are developed and applied, all received a small kit that all children will also receive to maintain a safe space,” said Méndez.

A work known to all

Andrés David Ascanio, conductor, specified that she was selected the Slavic March of Pyotr Ilyich Tchaikovscky because all those who are part of the System know and have interpreted this musical work at some level of their training.

The Minister of People’s Power for Communication, Freddy Ñáñez, stressed that this event will celebrate Venezuela “through the most successful and beautiful State policy that has been made in our country and that they are a paradigm for the rest of the world.” .

Likewise, the Minister of Popular Power for Culture, Ernesto Villegas, stressed that “lVenezuelan culture is closing the year 2021 with success ”, due to the various activities that take place in the country such as the International Book Fair (FILVEN), the Biennial of the South“ Pueblos en Resistencia ”and the premiere for November 15 from the Carabobo miniseries Caminos de Libertad.