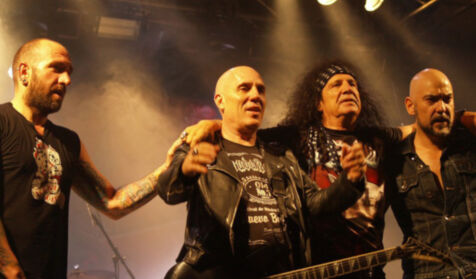 The band Howitzer has announced the cancellation of the concert that was scheduled to be held on October 30 at the La Riviera room, in Madrid, as a result of the campaign of the Rock Contra el Fascismo platform and the controversy unleashed in networks by statements by who should accompany them in that event, the musician Sherpa. “We boast of the freedom that rock represents and gives us, but also and above all respect. We don’t care where each staff comes from, what their race or sexual condition is. And that’s why we are not willing to allow our concert to become a political rally“, indicates the long statement issued by the group and by the promoter of the event this Monday.

The beginning of the controversy is found in statements published by Sherpa, who was the author of many of the greatest hits of another mythical band of the 80s, Red Baron, who on his Twitter account has proclaimed his support for Vox and against “the living room communists” with an argument that has turned on Internet users. “The time has come to decide which of the two opposing forces I was opting for: if for those that tyrannically try to impose their ideas and way of life by starting a stale revolution that brought so much pain, misery and destruction to our country in the past. or for the one that tries to conserve and improve everything positive that was achieved by giving us a Constitution and respecting its rules “, the artist has written.

In a message thread, he indicated that he has opted for the side of “honest people, who want a future for your children in peace and freedom, without being harassed by violent rioters of Molotov cocktails and burning containers. “His argument continues:” That they are not stripped of their rights to maintain their customs, culture and religion by those who come from outside, many of them illegally and even violent (see Ceuta and Melilla), to impose their traditions and culture that in many points are incompatible with ours. “Among the reactions to Sherpa’s speech is that of the Rock Contra el Fascismo platform, made up of a thousand of musicians of this genre, including Aurora Beltran and the member of Reoffenders Fernando Madina.

They requested the cancellation of the concert by some tweets that they consider “fascist, racist, homophobic and sexist”. “This event has begun to become something for which Obús has not been hired, nor for which we work,” argues the promoter Calle Underground in its statement, when announcing the cancellation of the event and promising that another will be organized. ” sooner “than they can” so that the freedom, respect and tolerance that rock represents can be heard again with force “. In a recent interview with this medium, Sherpa answered all those accusations, ensuring that if a person who keeps his word, who pays his debts, who tries to be a good neighbor and a good companion is a fascist, then he is.