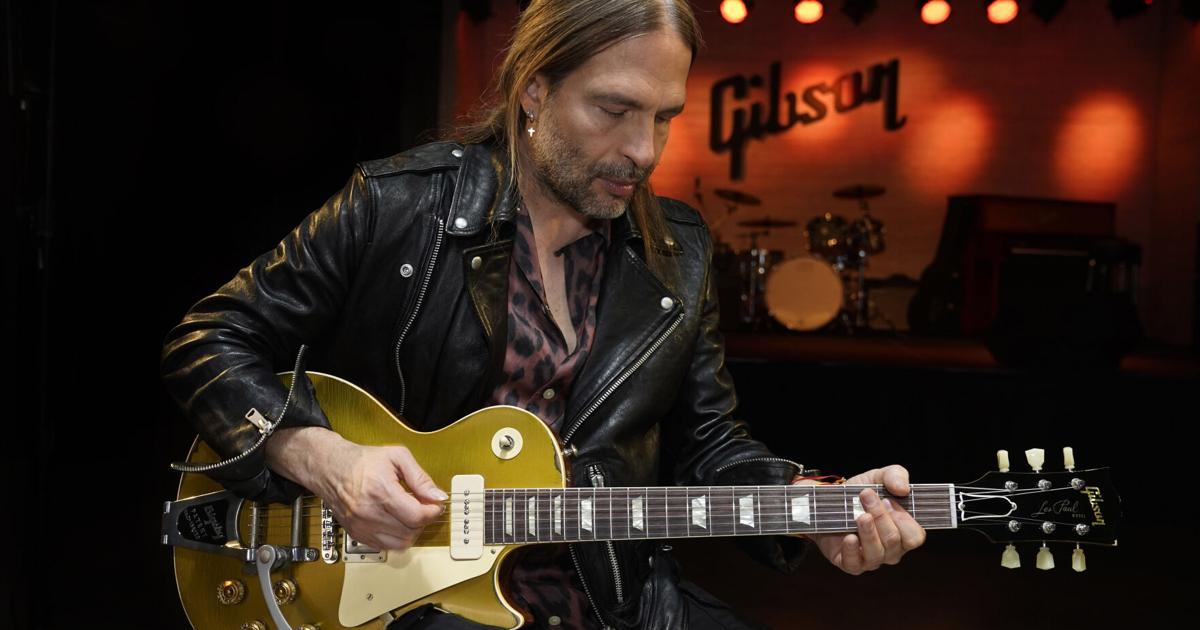 MIAMI (AP) — As a child Sergio Vallín, the guitarist for Maná, dreamed of owning a Gibson, but for him they were impossible to afford. After a four-decade career that brought him fame with the Mexican band, he has become the first Latin artist with a Les Paul Goldtop named in his honor and made with a special design.

“I can’t believe it. I feel honored, blessed and also with a responsibility. The only thing I want and hope is that whoever has this guitar feels happy,” Vallín said in a recent interview with The Associated Press. “This guitar is an extension of my hands and my soul,” the 49-year-old musician added, holding the instrument at Gibson’s Miami studios.

The Sergio Vallín 1955 Les Paul Goldtop guitar went on sale Tuesday, after three years of the artist’s work with Gibson company luthiers who meticulously asked for details to make it sound and look dazzling, from the shape and the golden yellow tint from the wood, to the bridge and the finish that makes it look like a guitar over 50 years old.

Vallín’s first 100 will be part of a limited edition offered online and at Gibson dealer stores worldwide, at a cost of $8,000 each.

“What I wanted, more than anything, was for it to have my spirit, for it to have some characteristics of what has made me happy in a guitar”, said the musician, composer and singer, who joined Maná in 1994, after the departure of his colleague César López. “It’s a simple guitar, but very versatile,” he explained after remembering that he had his first Gibson when he was already part of Maná, in the mid-90s.

Gibson is an iconic brand of instruments in the United States, with more than 100 years of tradition.

Vallín recalled that when he met Les Paul at a show in New York, the guitarist told him that if he stopped playing he would die. The Mexican’s guitar is inspired by a 1955 Les Paul, lighter, but with “a lot of power”.

Dressed in black jeans and a leather jacket that contrasted with the yellow of the guitar, Vallín recalled that when he was 10 years old, his father took him and his brother to a store to buy their first electric guitar. In the window they saw the Gibsons and their prices were out of the budget, but they left there with another less expensive one.

“For us it was the illusion of having an instrument on which you can perform songs,” recalled the guitarist, who began playing the guitar at the age of seven by ear and soon after learned by sheet music. With Maná, one of the most successful bands in Latin America that has sold close to 40 million albums worldwide, he has toured multiple countries.

After two years away from the stage due to the coronavirus pandemic, the rock band that includes vocalist Fher Olvera, drummer Álex González and bassist Juan Calleros, resumed its massive concerts in Los Angeles in March and hopes to tour other cities soon. from the United States and Latin America.

Vallín, who released his solo album “Microsinfonías” in 2021, feels happy and grateful for the present and for returning to the stage with his own guitar.

“I feel alive, the pandemic was something very strong,” said Vallín, who especially missed contact with the public. “That was a need, that human connection, because music is that, it’s a connection.”

Sergio Vallín from Maná has his own Gibson guitar