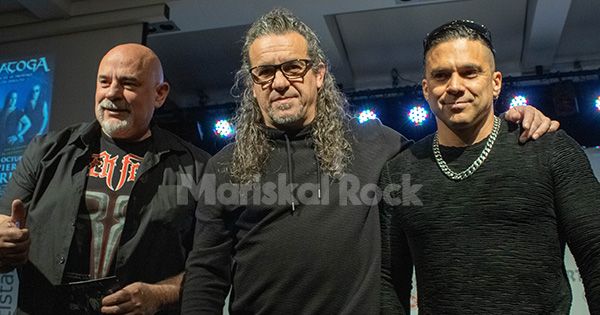 Saratoga continues to celebrate its 30th anniversary in style. They told us all about their projects at a press conference held at the Society of Performing Artists IEA in Madrid, in which they participated Niko of Iron (bass guitarist), Jero Ramiro (guitarist) and Tete Novoa (voice). The fourth member, the drummer George “The Siberian Steppe”, could not attend, since he had a recording in Valencia. Niko told us: “Jorge told me to send you lots of regards and that he would have loved to be here.”

In this act the video clip of the song was presented “Damn Heart”re-recorded for the album ‘XXX’which will be released next tuesday march 29. We were able to see it for the first time, and it must be said that it is a very good video, with a dark setting and recorded no less than in the cemetery of Sad Hilllocated in the province of Burgos, where the climax of the film takes place “The Good, the Bad and the Ugly”starring Clint Eastwood. This place is famous in the world of metal, since Metallica opens his shows with the composition “The Ecstasy of Gold”which is part of the soundtrack he created Ennio Morricone for this movie. They are very happy with the result and they tell us that it was a very good experience recording in a place with so much history.

They have announced that the October 22 they are going to do a concert in Madrid to be recorded for DVD and live disc. This will be in the riviera and tickets will go on sale next week. They tell us that there will be special guests -perhaps also former members of the group- and that the pre-sale of the release could be in December, being ready in early 2023. They have not advanced us much more because the date is still a little far away, but what they do tell us is that little by little they will announce surprises and names of guests. Tete Novoa stated: “How not to celebrate a 30th anniversary at home, as we all expected. We want to throw a big party and pick up a live DVD where you are all very invited”.

They were also talking about their 30th anniversary tour, which started in Murcia on March 4 with a concert with which they are very happy because of the great reception they have had. The band faces this tour with great enthusiasm and enthusiasm, of which they highlight that the most important moment has been being able to see each other again on stage after the complicated time that Covid has left us. “After this pandemic, we are going to fight tooth and nail so that all this goes ahead and so that the public has a great time.”

We’re sure Saratoga is going to rock it on this 30th anniversary tour. Here we leave you the next dates of their concerts:

Saratoga will record a special concert to publish a live DVD for its 30th anniversary and presents the video clip of “Maldito corazón” – MariskalRock.com