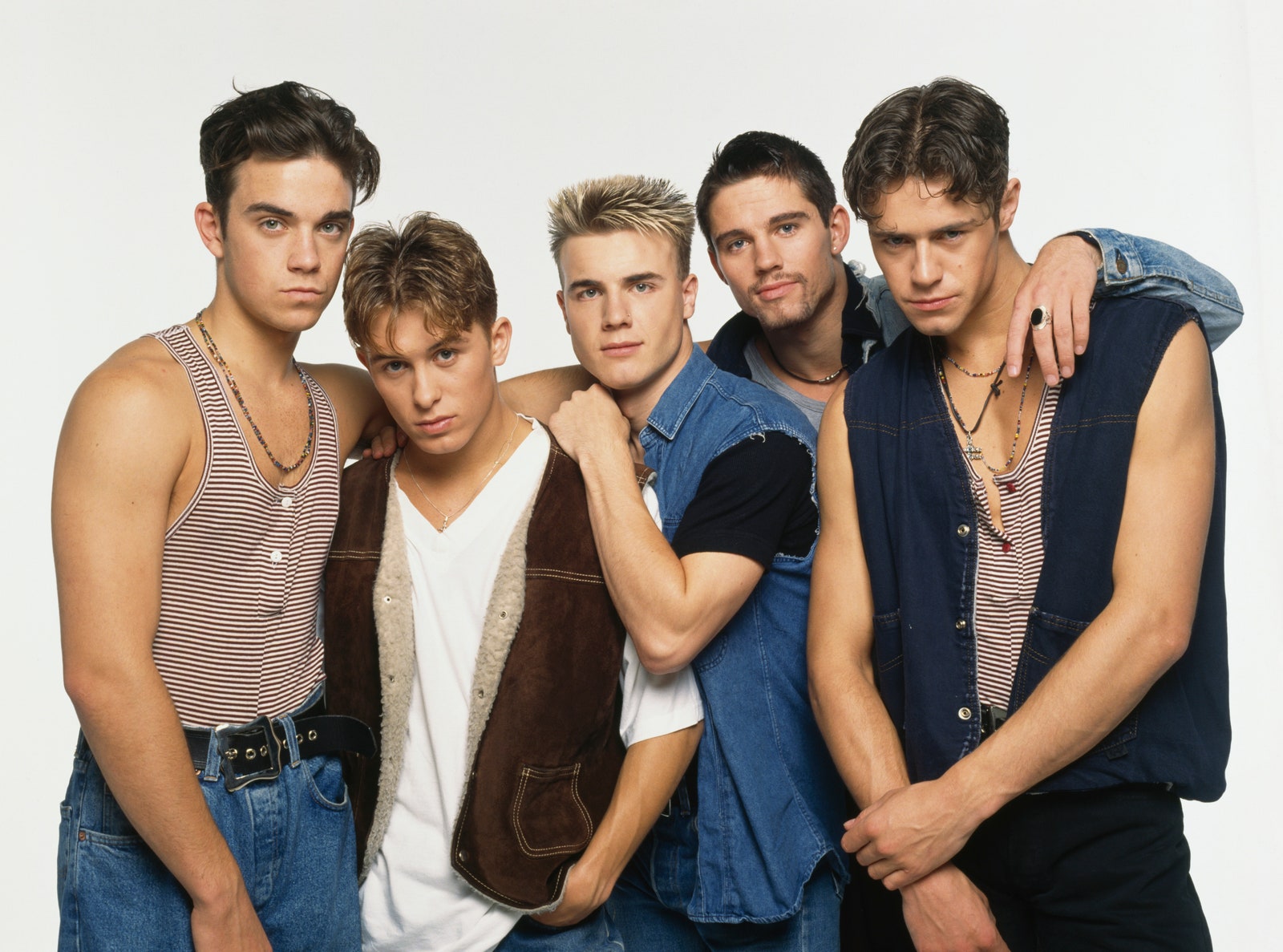 Robert Williams he is lying on the bed without a shirt. “I’m in Ibiza on vacation,” he says with a bright smile on the video call as he places a pillow under her head. It’s not every day that he gets to interview a global pop star lying on a mattress. One wonders if this is normal with Robbie, always so laid back, so eccentric, so comfortable in his bread-faced histrionic role. But the scene soon turns into a kind of remote psychotherapy session, in which he explains that he has locked himself in the room not only to escape the chaos of the birthday party of Colette, his third daughter, who is turning 4 years old, but also because there are things that it is better to stay away from at all times. “I try not to go near cakes or pizzas,” he says. Are you on a diet? The answer is surprisingly honest: “My nature leads me to indulge in what is bad for me, I develop addictions to everything, I am unable to hold me back That is why I must always be alert, because if I allow myself to be the person that my head and my mind want me to be, I would become huge. To the point that it would take a crane to lift me out of the chair.”

Robbie and addictions, Robbie and self-destruction: a complete chapter in the story of this 48-year-old boy. In reveal, his 2017 autobiography, there is an episode in which he talks about his demons and the need to exorcise them by making the private public: he says that he was lying in a pool of blood, alone in the bathroom, after mixing cocaine with an antipsychotic, thinking: “I’m dying and I don’t care.” robby and help (field) it is, instead, the chapter that marks the rebirth: the love that began fifteen years ago, the marriage, their four children, the end of addictions and excesses. robby and Take That it’s the part that encloses a cornerstone of 90s pop culture, which became legendary after its abandonment – those who were there may remember that a helpline was created in the UK in 1996 to support fans desperate for the breakup of the band. Today, Robbie celebrates 25 years of his solo career with XXVhis new hits album in an orchestral version recorded with the Metropole Orkest.

Do you remember when you decided to leave Take That and start your solo career?
I remember it was broken. I was in the middle of a nervous breakdown, the first in a long series, and I saw no way out. I had to leave a situation where I felt dramatically insecure and didn’t feel cared for, loved, or appreciated. I had just become an alcoholic and a drug addict. Everything told me that I was in danger and had to escape.

What made you think that you would be better off outside the band?
I actually thought that I would immediately become the person I am now. But if I had known what I know today, I wouldn’t have left so soon.

And what do you know now?
That it was highly unlikely to solve everything like that, with that gesture. For me, the 90s were a mixture of illusions, all exciting. I was also very impulsive and I liked to bet on the future.

I remember when he left Take That…
So let me apologize (smile).

At that time it was said that she wanted to be the prima donna and that she often quarreled with Gary Barlow.
Nobody was looking out for me. There was only one person to consider, and that was Gary. The rest of us were just his dancers. If things had been different I wouldn’t have had to leave.

You are the most successful.
I ‘ve been very lucky.

Did you know that in 1995 there was a demonstration in the Piazza Duomo in Milan to protest its abandonment?
The truth is that no, he was always drunk. He knew things were happening, but he was in the middle of a nervous breakdown, I barely remember how I felt.

Did fame destroy you?
That kind of fame destroyed everyone in Take That. I was in rehab, Mark was in rehab, Gary fell into a depression and at one point couldn’t even leave the house, Jason left the band because he couldn’t take it, and Howard thought about killing himself when the band broke up.

Did they take you straight to the slaughterhouse? Do you think the record company and the managers have any responsibility?
No member of our team had experienced a phenomenon like Take That. None of them were really prepared to handle those levels of fame and madness. That is learned on the fly. I wouldn’t want to see myself in the shoes of someone who does that job, and I don’t know what the industry is like today for a 17-year-old. I just know that to survive in a situation like this you have to be surrounded by empathic people.

What is the best memory of your career?
I couldn’t say, I think the best is yet to come.

One of the most famous moments was when in 2003 he brought a fan up on stage during a concert and kissed her passionately. How did she come up with it?
Everything happened on the fly, it was not premeditated. You see, more than anything I consider myself as an entertainer, it is natural for me to use anything to entertain others. In both the 1990s and 1980s, pop stars had to provoke and be controversial, the public looked up to them and experienced something out of the ordinary through them.

It’s not like that?
Now they would cancel my concerts if I tongue kissed a fan like that. A spontaneous gesture, somewhat sweet, somewhat ridiculous, without shadows. No, you can no longer be provocative, go against the current. The spark has disappeared, we have to settle for the great mass of insipid and colorless thoughts that invade us.

Today, in his new song Lost, he sings: I have lost my place in life. When it happened?
In all those moments when we did not listen to our better nature to abandon ourselves to inconsiderate behavior, in my case it was hedonism and drugs. But it’s all part of the rich fabric of life.

He enters the room and a girl dressed as a princess with a freshly painted face appears on the screen: it is Teodora, her eldest daughter. “Dad, shall we cut the cake without you?”, she asks her. Robbie Williams replies that he is working and the girl leaves. “I’m so sorry,” she says.

Thanks to your children and your family, have you found your place in life again?
Yes, I have found a meaning, a reason to live, a reason to function. I really like where I am and the lifestyle I have, my job and the opportunities it gives me.

How is your current lifestyle?
I am a father of a family, Ayda and I are always very busy with the children, we travel a lot, we move all the time. In my family, no one before me had the opportunity to live like this, in luxury and prosperity. We have many friends and acquaintances to spend time with. It is a very beautiful life.

Are you still friends with Elton John?
We haven’t seen each other for a long time, but yes, he is a person I will always love very much. Many years ago he helped me or at least tried to.

In what sense?
He sent me to a rehab clinic, but I wasn’t ready yet.

Have you learned to love yourself?
Let’s say I’ve made progress. If before the hatred I felt for myself was ten out of ten, today I am in three. It is no longer what rules my life. I still feel a bit uncomfortable, but better than before.

He has been with Ayda for 15 years.
I am very lucky because I am with the best person I could be with. Ayda is smart, nice, kind, has good taste, empathy, makes me laugh, I like her physically and I’m proud of her. I have met many women and none can compare to my wife.

How many women has he been with?
I’ve never counted them, but let’s say more than a hundred.

Many of them were famous.
Ayda says that every time we turn on the TV, a woman I’ve slept with comes on, and it’s true. Luckily she has a great sense of humor and what she went through before we met doesn’t interest her.

And how do you feel in your role as a father?
Its beautiful. I like it so much that I feel like the universe is saying to me: ‘here is a level of living that you didn’t know existed and now that you can experience it, isn’t it great that you chose to do it?’

How will he explain his past to his children?
I think that in this fast-paced world, when they are teenagers my story will not sound so different from other people they will meet, they will be in contact with hedonistic millionaires similar to how I was. I hope they escape the tentacles of addiction, I pray for it. But I also think they probably won’t want a life like that.

Do you know that your father is a pop star?
My son Charlton (seven years old) thinks I’m a footballer.

Why?
I do not know why. Yesterday he told someone that I was playing for Manchester United. My oldest daughter, on the other hand, loves that I’m a pop star. She wants to be a singer.

Would you like me to follow in your footsteps?
Yes, it is a beautiful profession. If it looks like just a job, it’s better than being in the office.

Robbie Williams: “Now they would cancel my concerts if I tongue kissed a fan. You can no longer be provocative”

Day 1 of BTS "PTD Las Vegas starts now: how to follow the Bangtan concert LIVE
If BTS gave a concert in Peru, how much would a ticket cost to see their show live?
Farruko apologizes for his songs and turns a concert into 'a mass'