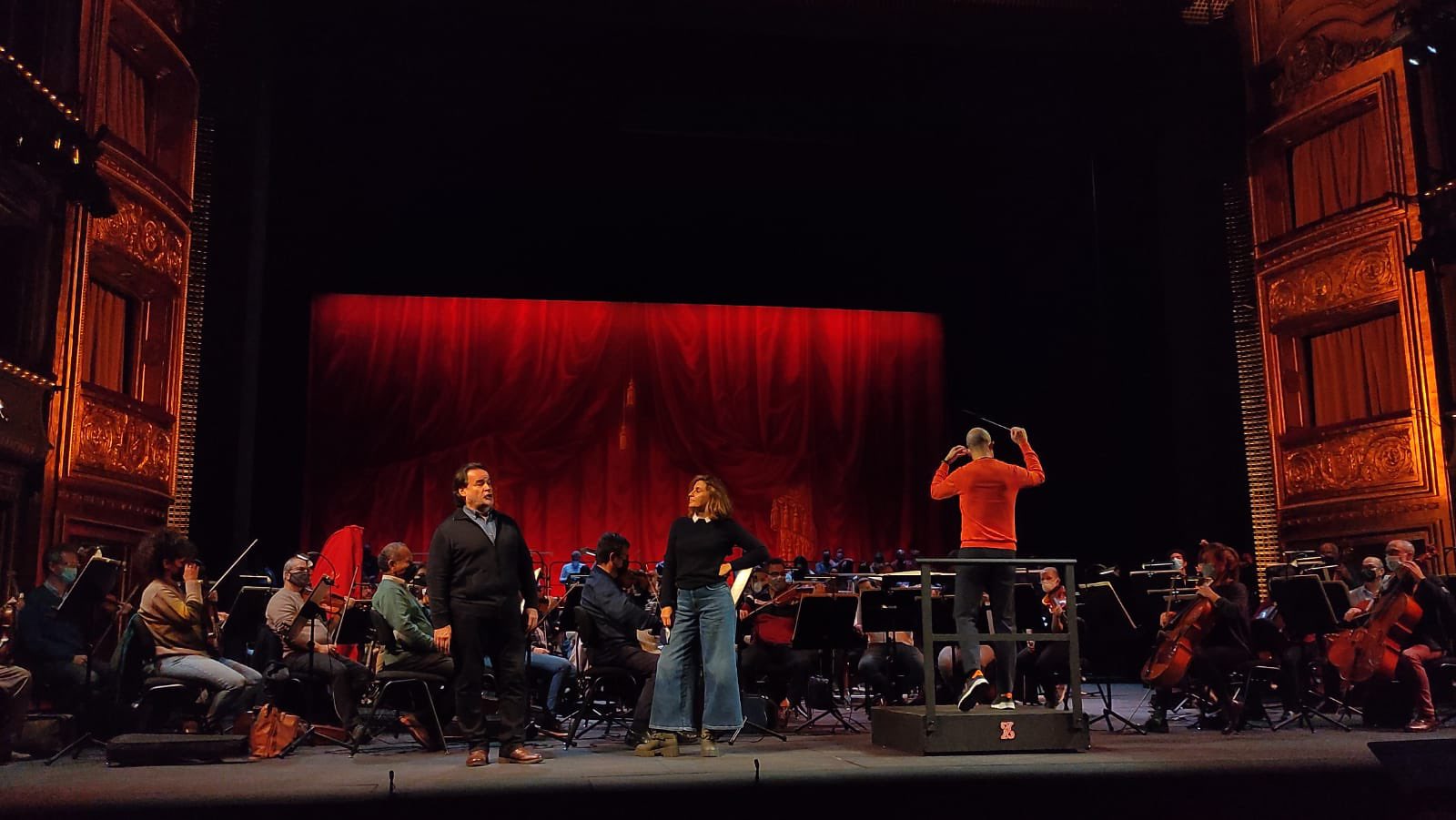 We review in this writing of Dress rehearsal of the gala announced for the 30th, which finally, due to the staff strike, has not been held. The rehearsal went smoothly, without interruptions, and is therefore worth an official session with an audience; that by the way, before the suspension of the function, it populated the majority of the available localities.

Although there was only, as we were told, a previous test in the morning, the truth is that the “test” was developed well oiled; for which, of course, There were two soloists of stature, knowledgeable and very experienced in these matters.. Sabina Puértolas, with an interesting national and international career, is in a magnificent moment of form. The voice, right now that of a lyrical-light, is very well “set” and delivered, in an easy, natural and fluid way. She articulates masterfully, with a very clear diction –something rare in a high-pitched soprano- and an accident-free handling of regulators, accents and caracoleos. Homogeneous and timbred is its spectrum, with certain silver touches and sounds of undoubted sweetness, with exquisite pianos and safe treble.

He already let us know with his interpretation of the “Polish” from “The Barber of Seville” from Gimenez, who sang smiling, with loose and elastic jaws. Without problems in the agility of the “Song of the nightingale” from “Doña Francisquita“And in the funny”Harlequin Song” from “The general“, Both from Lively, collaborated with satisfaction in their duets with Jose Bros, one of “Luisa Fernanda” from Moreno Torroba and another of “The Wildcat” from Penella. Your partner this time, Jose Bros, an already veteran tenor, in his fifties, showed us that he still has things to say.

The voice has evolved, as is logical, from those first voyages in which we heard a light timbre with a tendency towards the lyrical-light and in which we perceived a certain whiteness, lack of harmonics and a partly open emission, although with penetration and fluency in the upper zone. Now the spectrum is wider, the bass more present, the center more substantial and the treble more present. The metal, curious, very personal, shines well, although temporarily clouded with an undesirable stridency and, in the highest areas, provided with a certain wobble. Professional and confident, he properly sang the romance of “The last Romantic” from Soutullo Y Vert, the little known of “The island of pearls” from Sorozábal and the exit of Javier from “Luisa Fernanda” from Moreno Torroba.

The two voices, well amalgamated, had the punctual support of the Community Orchestra and the musical director of the Theater, Guillermo García Calvo, who showed his security, his good work, his discreet command without fuss, his harmonious gesture and his usual knowledge of the “métier”, always respecting the natural breathing of solo singers.; and that of Choir, well trained by Antonio Fauró, which despite passing moments of certain insecurity, was intoned, although logically damaged and cushioned by the use of masks.

At “Intermediate” from “Luis Alonso’s wedding” from Gimenez and in the “Fandango” from “Doña Francisquita”Acted with her clever castanets, well punctuated rhythmically, the veteran Lucero tena, which again proved his expertise and security. We would have preferred anyway to listen to the pieces without the accompaniment of such percussion. We were also expecting an encore by the two singers. Instead we were given the curious arrangement that of “Silent Night“Did in his day Juan Jose Colomer. Arturo Revert

Review: Voices trained in the Christmas Concert at the Teatro de la Zarzuela