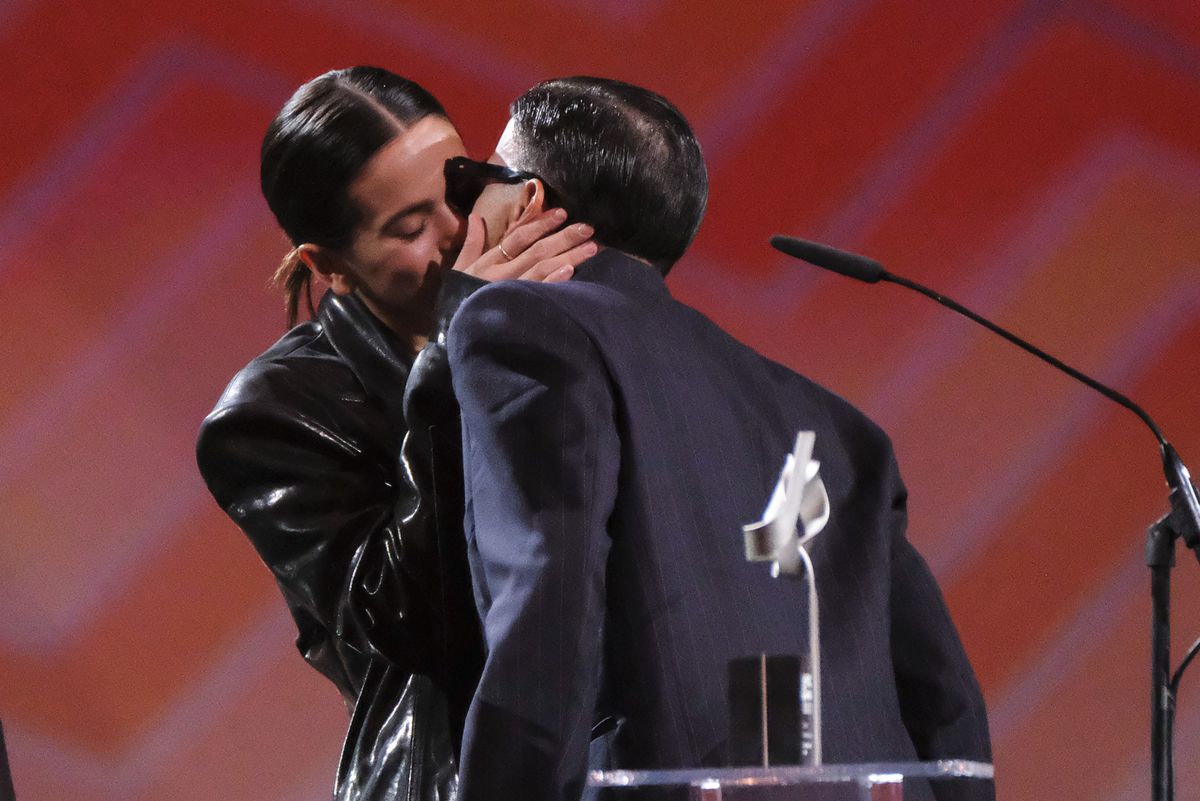 It was the most anticipated appearance in LOS40 Music Awards 2021 Illes Balears. And there, in the previous poses Rosalía and Rauw Alejandro took another step to formalize their romantic relationship at the gala that was held at the Velòdrom in Palma de Mallorca: both singers posed together for the first time at an event. Although upon arrival they attended to the media separately – she made the general tour to speak with journalists while he was interviewed at the LOS40 Preshow – they did not avoid being portrayed by the press. When he was heading towards the interview area, the Catalan called Rauw Alejandro to have them photographed together and, in addition, he shared images of his arrival at the gala in the same vehicle through his Instagram account.

But the big surprise of the day came late at night, precisely when Rosalía took the stage to deliver three awards together with content creator Ibai Llanos. When she opened one of the envelopes, the singer told Llanos: “I’m praying.” He did it so that his partner could win the award for best artist or urban group in the Latino category. So it was. The venue then exploded in screams, while the singer came to the center of the stage, where he kissed his girl and, in addition, wanted to dedicate the award: “To my beautiful girlfriend, who is my muse.”

Although rumors about the romance between Rosalía and Rauw Alejandro had been haunting them on social media for more than a year – fans of both artists discovered that they shared stories from the same locations, even though they did not appear together in them, and they observed that they sometimes wore similar clothes – and they had already been photographed dining together in restaurants, it was not until last September 25 when the Catalan decided to confirm that she was dating the Puerto Rican. That day, the one from Sant Esteve Sesrovires was 29 years old and shared his birthday celebration in Miami through Instagram. In addition to images of balloons, cakes and the party with her friends, Rosalía published two portraits in an affectionate attitude with Rauw Alejandro, who responded with smileys of laughter and hearts.

From that moment on, public displays of complicity by the couple began to follow each other. The day after Rosalía’s birthday, the singer published a gallery of images of the two of them together, with an affectionate message: “Even if the sun goes down with you, the day never ends. Happy Birthday Baby”. She was quick to comment: “You, my December 24”. Shortly after, they shared photos of their vacation together in Mexico: diving, with mariachis or with Catrina makeup to celebrate the Day of the Dead. Rosalía and Rauw Alejandro met through a professional collaboration: she was featured in the production credits of Tell him, one of the themes of Aphrodisiac, the singer’s debut album, which was released on November 13, 2020, followed in May 2021 by the release of his super-hit Everything about you. After this first professional cameo there was much speculation about a possible joint song, in line with the themes released by Rosalía with Travis Scott, Billie Eilish, Tokischa or the last one, published yesterday, with The Weeknd, Fame. “Some day some day [llegará la colaboración]. Rosi and I have a great friendship. She was able to work with me on ‘Aphrodisiac’, my first album. We exchanged a lot of ideas, we’ve been working on her things together … We have that nice chemistry in the studio. We are waiting for the right moment to do the theme and make it a super theme. For me, she is the top. Not only in Spain, but also worldwide. He has a lot of talent, “he explained last June in an interview with Cosmopolitan 28-year-old singer born in San Juan de Puerto Rico.

So much Rosalía —who has just announced that she will soon present her third album, Motomami– like Rauw Alejandro they have turned many of their songs into instant hits, and during his recent tour of Spain the singer has not hesitated to make his love for the artist public on stage. On October 9, at the Palau Sant Jordi in Barcelona, ​​he declared his girlfriend in Catalan saying: “Barcelona is the greatest city of the world and tea is the most beautiful girlfriend in the world” (Barcelona is the best city in the world and he has the most beautiful girlfriend in the world too). Before starting his relationship with Rosalía, there had been speculation about a possible courtship of Rauw Alejandro and the Spanish actress Ester Expósito (protagonist in the series Elite), while the best-known couple of the Catalan was the Madrid rapper C. Tangana, with whom he collaborated in 2016 in Call me later and Before i die.

Rauw Alejandro dedicates an award to Rosalía at the LOS40 gala: “To my beautiful girlfriend, who is my muse”