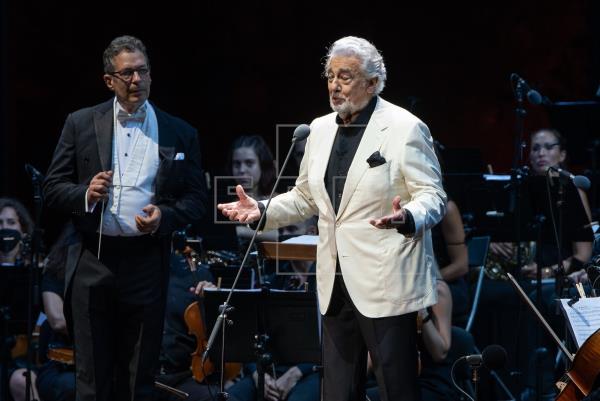 The Spanish tenor Plácido Domingo demonstrated this Wednesday at Starlite Marbella (Málaga) that at 80 years of age not only does he have a great voice, but he also has the affection and favor of the public who, standing in full, enthusiastically applauded each one of them. his interventions in a unique concert with an unexpected ending, including the Spanish anthem.

Accompanied by the Malaga Symphony Orchestra, the Madrilenian gave a masterful performance full of surprises in the second of the concerts he is holding in Spain after his return to the stage after a hiatus of almost two years and that, undoubtedly, those present they won’t forget for a long time.

The main absence of the evening was that of the soprano Ainhoa ​​Arteta whom Plácido Domingo, already from the stage, wished a speedy recovery and who was replaced by the Madrid soprano, Saioa Hernández, a more than worthy substitute and whose voice dazzled the respectable .

Among the surprises that the night brought, the performance of Marta Sánchez, to which the tenor himself presented and who interpreted with his particular style the Argentine tango “Nostalgias” and the pasodoble of “Las Leandras”, “Los Nardos”, which started the applause of an audience that appreciated his good work.

Among the attendees, well-known personalities from the world of entertainment and politics, among them, the former president of the government, José María Aznar, and his wife, Ana Botella; who shared a box with the Argentine model Valeria Mazza; the former Minister of Defense, María Dolores de Cospedal; or the judge of the “Malaya Case”, José Godino.

They also came to the Marbella auditorium to tuck in the tenor, the Mexican model and ex-partner of Alejandro Sanz, Jaydy Michel, along with her current husband, the former Mexican soccer player Rafa Márquez; the media businesswoman and television collaborator Carmen Lomana; or the ex-partner of Cayetano Martínez de Irujo, the Mexican Genoveva Casanova.

The concert began with rigorous punctuality and Plácido Domingo sang, for the enjoyment of those present, several high-profile pieces such as the arias “Ò vin dissipe la tristesse” by Hamlet or “Nemico della patria” by Andrea Chénier.

Together with Saíoa Hernández he performed several duets, including those of the zarzuelas “When I come to the workshop” of “La del manojo de rosas” by Pablo Sorózabal and “Me llabas Rafaeliyo”, from “El Gato Montés” by Manuel Penella, wink evident to the land and the Spanish, something that the public, mostly national, approved with flying colors.

Already in the final stretch of the concert, Plácido Domingo chose to sing “Bésame Mucho” with Saioa Hernández and Marta Sánchez, a song that he dedicated to the attendees of which he assured were “the best of the whole night” and whom he encouraged to accompany them. arguing, laughing, that the artists had already sung a lot.

A standing ovation of several minutes again required the presence of the tenor on stage, who on his return gave the respectable “Acariciame en dreams”, with Hernández; and “Of the most subtle hair”, already alone.

The closing of the concert came from the hand of the anthem of Spain by Marta Sánchez, which Plácido Domingo performed with the popular artist and which drew the applause and cheers of an excited audience packed to the brim.