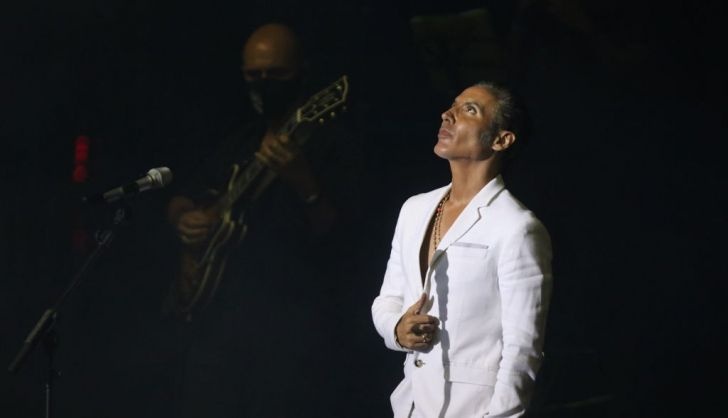 This Saturday, Salamanca will enjoy one of the most recognized voices on the national scene. Starting at 10:00 p.m., Pitingo will perform at the Puente Ladrillo soccer field.

The Spanish artist comes to present `Mestizo y Fronterizo´. He is defined as mestizo by his gypsy mother and his father who is not, and border because he was born in Ayamonte, which borders Portugal. The show will be composed of a total of 22 people (Gospel choir mixed with all kinds of races, gypsies, mestizos and whites).

The album talks about the interculturality and culture of different countries, since he defines himself as a curious person who always wants to know the why of things. Pitingo attends SALAMANCA24HORAS in this interview:

For people who don’t know you, who is Pitingo?

I am a singer who likes to make a living from his art. I am neither better than anyone nor worse, simply different and privileged to be able to eat what I like and live from what I like. This is true success. I am very proud to have achieved it and have been in music for 22 years.

How did you start in the world of music?

I started very small. The first time I got on stage was when I was 13 years old in Madrid in a well-known venue, where all the famous people of the time went. For me it was an honor and I combined it with the jobs that were coming out. The truth is that I have worked everything, at the airport unloading suitcases, in a printing company and at night I went to flamenco tablaos.

How were the beginnings?

The beginnings were quite hard but very beautiful. The person I have to thank for everything and I miss a lot is Enrique Morente, he was the one who heard me for the first time and his word was enough for all the record companies to notice me thanks to one phrase.

How do you choose the songs you cover?

First, I look at the adaptation to see how it would look in Spanish; second, I get in touch with the author and if the author is deceased, with the relatives or the publisher that bears all the authorship, otherwise I would not be able to make the songs, since I need a permit; then I see that the song is beautiful in Spanish, always respecting the chorus in English that is what I never change and I go forward.

Usually I’ve always had a yes from singers. What I do is send them the song so that they can say yes and if there can be a review on top of it, that’s great.

What is the musical genre with which you would not dare?

The truth is that I have done everything, I have sung with all kinds of artists. The truth is that I can not say that I do not dare with a genre, they call me artists from all over the world and I like challenges. Maybe sing in Chinese or Japanese (laughs).

The important thing is to have an ear to be able to tune, heart and personality. You have to study a lot because it is not just singing and you have to know other types of music as well.

There is a dream duet that can no longer be fulfilled and it would have been a dream for me. I was about to get it and it was with Whitney Houston, it was something I had dreamed of since I was little, since she was always with me and was an icon for me. But he died when we were starting to organize it. Now, I have been lucky enough to fulfill a dream and it has been to sing with Sam Moore. I used to listen to him when I was 14 years old, when I met him in Miami I was surprised. In this new album that I’m recording now, there will also be collaborations, but I can’t reveal them …

I can’t get too far ahead. The only clue I can give is that it is with Mexican music, a wonderful symphony orchestra studying the culture there… Starting in December we are going to live in Latin America and I start doing everything that is part of Latin America and the United States.

How has the return to the stage been in times of COVID-19?

We have noticed all the artists. For us the stage is our vitamin. I have felt very bad, I did not know what to do. He was singing around the house like crazy and the truth is that we have had a very bad time. I have tried to help as much as possible to everyone that I could and now, thank God, it seems that we are seeing the light. The truth is that since the end of the restrictions we have not stopped.

To finish, what do you say to the Salamanca public?

I love Salamanca. It has one of the greatest cantaor in history: Rafael Farina. I listen to it practically every day, not every day. It has always been present in my house. Salamanca is a wonderful and beautiful city with very good people.