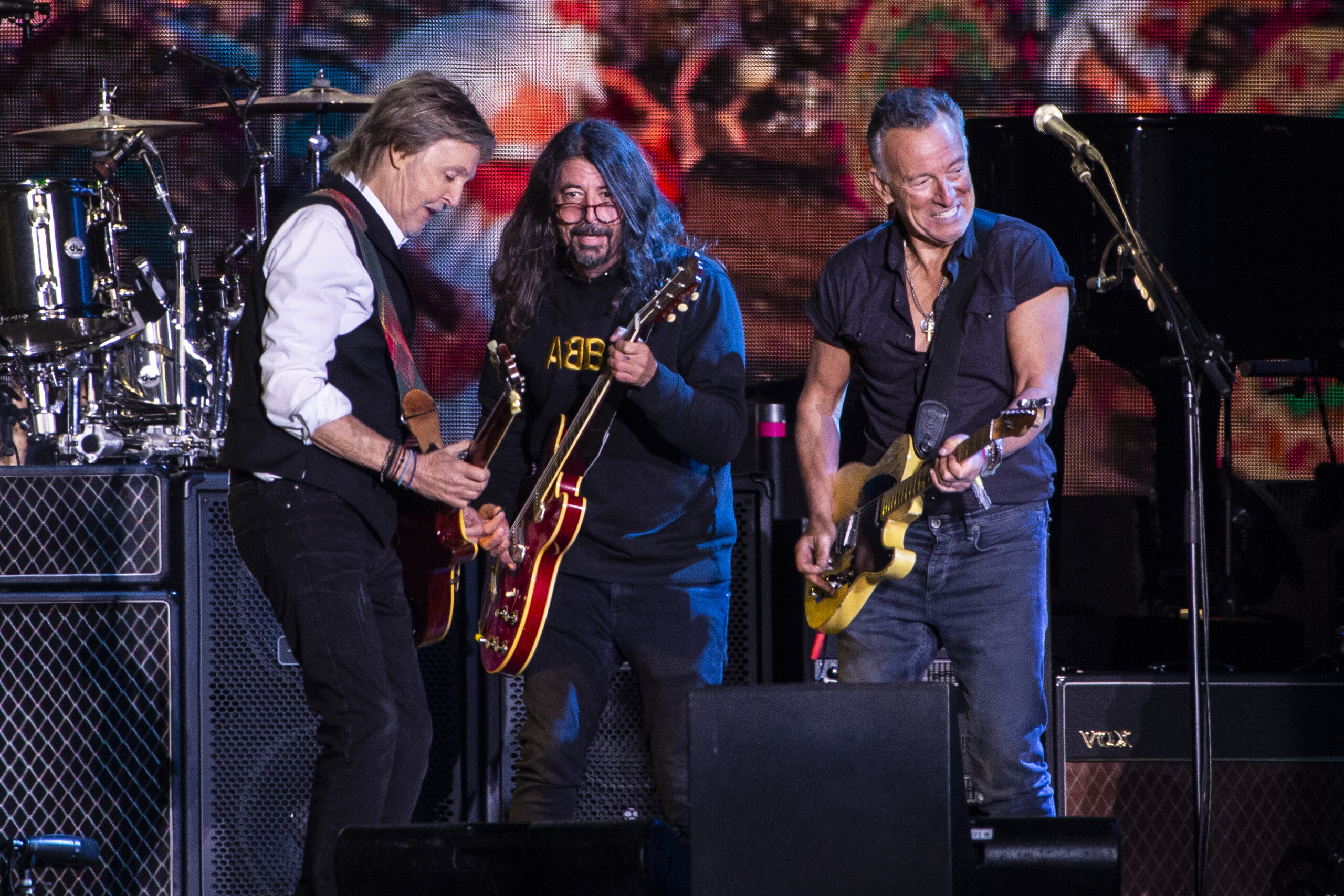 “I’m singing with John again, we’re together again,” Paul proclaimed from the mythical Pyramid of Worthy Farm. “I know it’s virtual, but this has never happened before.”

Can’t do ‘I’ve got a feeling’ with a virtual John Lennonknock George Harrison’s ukuleleI gave up Jimi Hendrix Tribute with ‘Foxy Lady’ and invited the end of party to Bruce Springsteen and Dave Grohl in an unusual trio for posterity. There were a total of 35 songs, in 2 hours and 50 minutes of concert that spanned six decades and consecrated Paul MCCARTNEY What Glastonbury’s incombustible “grandpa” at 80.

“I’m singing with John again, we’re together again,” Paul proclaimed from the mythical Pyramid of Worthy Farm, transplanted for a day to the rooftops of London at that epic 1969 concert. never happened and it’s something so special.

‘Macca’ alternated the classics like ‘Lady Madonna’ and ‘Love me Do’ with Wings songs like ‘Band of the Run’ and recent compositions like ‘Come on to me’. Halfway through the concert, he expressed a heartfelt complaint, his voice a little cracked: “When I sing Beatles songs, all this lights up like a sky with stars. With the songs now, it seems that we are in a black hole, but it gives Same”.

Things slowed down a bit with ‘My Valentine’, dedicated to his beloved Nancy Shevell. In a video even Johnny Depp sneaked in, very launched who is walking with his new career as a guitarist after the famous trial. After the halfway point, we took flight with ‘Live and let die’ and that already sounded like a final apotheosis with ‘Hey Jude’.

But there were still the two big surprises of the night. Suddenly Dave Grohl appeared, for the first time since the death Foo Fighters drummer taylor hawkins. “I swore an oath,” she declared to Paul. “And I could never miss being here with you on a night like this.”

And so broke in Bruce Springsteenrejuvenated at 71 with the former ‘beatle’, attacking ‘Glory Days’ and ‘I wanna be your man’ in two voices, and wishing his host “another glorious 80 years”.

“We should have done this three years ago, but the pandemic hit,” reported Paul. “The important thing is that we have come out ahead and that we are here, although history has dealt us another hard blow,” he said, as he waved the Ukrainian flag in protest of Putin’s invasion.

Volodimir Zelensky had addressed hours earlier by videoconference before the 200,000 festivalgoers, proclaiming that “Glastonbury is the greatest concentration of freedom in the world!”. Greta Thunberg launched her particular climatic plea and Billie Eilish opened fire on Friday, both celebrating her coming of age.

Lorde and Kendrick Lamar put the counterpoint on Sunday, but the icing was again on the account of two living legends: Diana Ross (78 years old) and Herbie Hancock (82). The two put the final fireworks to Glastonbury revived that will go down in history as the last and immortal concert of the Beatles. Where were you, Ringo Starr?