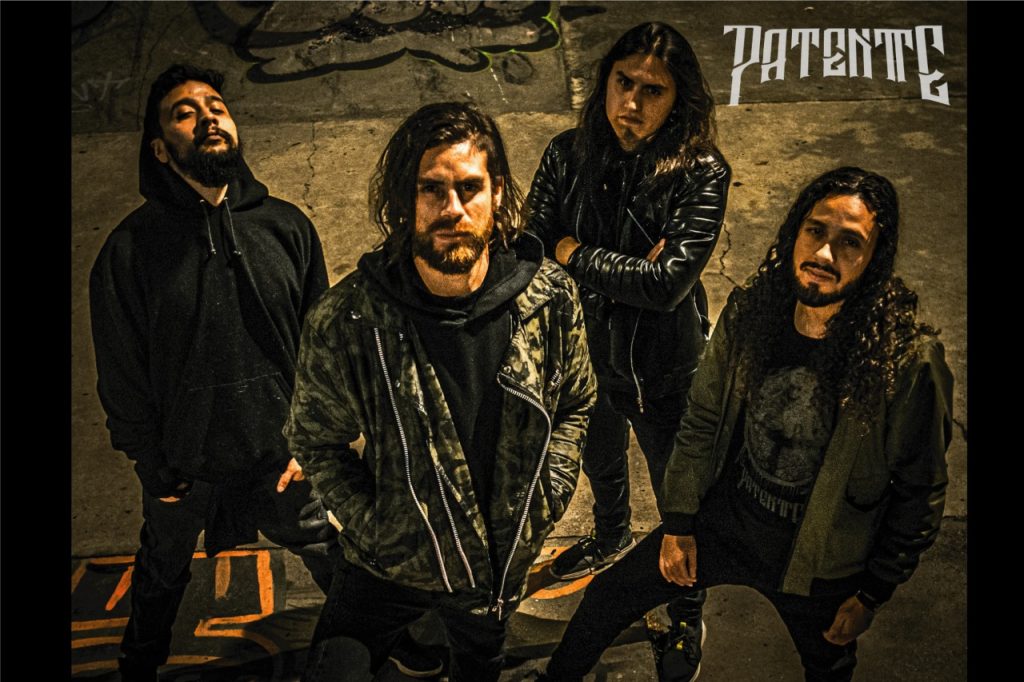 Patentte is a Colombian metal band made up of Carlos Vargas on vocals, Sheik Cantillo on guitar, Camilo Roa on bass and Juan Ortiz on drums. The project was born in Bogotá in 2019 with the purpose of generating an innovative proposal in the genre and with a lot of criteria and authenticity, as the name of the group indicates: Patentte alludes to unique and characteristic music and sounds patented by the band.

Patentte’s musical proposal is based on a philosophical and existential content in his lyrics, always seeking to give value to the will, transgressing social items with a colloquial language. At a musical level, the band makes an academic analysis to understand music from the beginning of classic metal in order to give its proposal a starting point at a conceptual and musical level.

«In his songs, Patentte criticizes and calls for the art of understanding and analysis of the human condition, freedom, individual responsibility, emotions and the meaning of life itself. Being is wanting and everything is the will of being», comments the group with musical influences from the extreme sounds of metal and an influence from the roots of thrash, groove, slam, death, speed, numetal and hardcore.

‘Moralis Inordinatio’ is Patentte’s debut EP, a work with a theme that revolves around philosophical content that seeks to raise awareness of the way of being, its virtues and defects, but, above all, its critical thinking.

With this production, the Bogota band wants to make visible the immense musical talent that exists in rock and metal in Colombia. In addition, empower people based on critical thinking with ideals and responsibilities in their actions, inviting them to create identity and autonomy in their decisions.

“The stories are not linked to a timeline but to a mental state where there is no understanding or empathy on the part of social beings and how all this is represented in a drama, the drama of life,” adds the band.

‘Moralis Inordinatio’ invites you to empower yourself and take charge of life with firmness and dignity. The EP was in charge of the musical part, mastering and mixing of Patentte and Sheik Cantillo under the independent label Styx Records.

The EP is released simultaneously with the single ‘Manipulados’, a song that explores sounds rooted in thrash metal and hardcore that speaks of the daily life of a person who is rejected in his family circle and in society in general, triggering and showing the worst of the human being. Without alluding to violence, the video represses the aggressor at the end of the shot as punishment for her actions. Every action has a consequence.

The video for ‘Manipulados’ was made in plasticine using the Claymation and StopMotion techniques. It was produced in Argentina by TFP Studios.

The clip’s script was created based on the story of a man who wakes up one day and reads a farewell letter confirming his breakup. The protagonist is filled with a lot of anger and resentment, wanting to calm these emotions with a concert by his favorite band (Patentte), however, he cannot enter because the event is full. One more reason to explode and go into chaos.

The cover of the EP was in charge of the Colombian artist Felipe Mora, who made an oil painting based on a chaotic thought whose meaning is mental, moral and social self-destruction.

Patentte has prepared a series of shows for the coming months on the occasion of the live release of the EP and will perform in several cities in the country such as Bogotá, Medellín, Tunja, Villavicencio, Cali and Armenia.

“It is important that people give themselves the opportunity to get to know and discover Patentte because we bring an innovative and fresh proposal to the genre, breaking all the established schemes in the language of metal”, concludes the band.

You may also like: Superlitio presents «Visiones del Futuro», his ninth album

Discover with us new music week by week. listen to our Podcast.